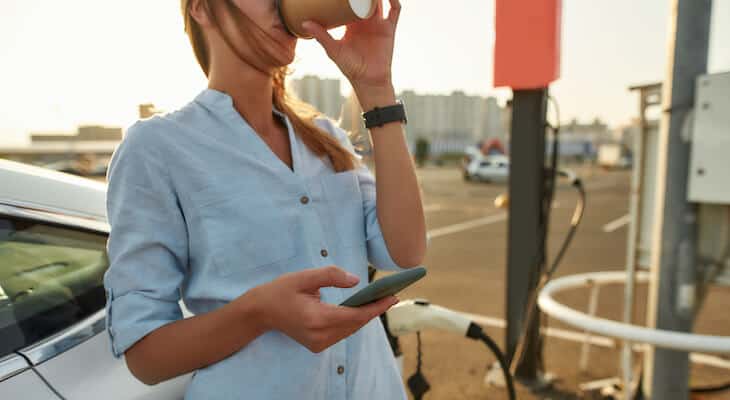 The Nissan LEAF and the Chevrolet Bolt EV are two of the most popular electric cars for a reason: They’re both compact EVs that come at a more affordable price point than many of their competitors. While they don’t have the stylish look of the Tesla Model 3 or the BMW i3, they still have impressive range and a sizable battery capacity.

That said, there are some differences between the two that drivers need to be aware of, from their price point to their performance. Depending on your budget and your driving habits, one car may turn out to be a better fit than the other.

With those factors in mind, let’s compare the Chevy Bolt vs. Nissan LEAF by looking at the 2021 models of each vehicle.

The Nissan LEAF has been around since 2010, making it one of the longest-running and top-selling electric vehicles on the market. It’s a five-door hatchback with a front motor and front-wheel drive.

For the sake of this comparison, we’re going to focus on the standard 2021 models of each vehicle, but you may be able to find a better deal by buying a used model.

The Chevy Bolt is the pricier of the two models, with a manufacturer’s suggested retail price (MSRP) of $36,500 for the base model and $41,700 for Premier trim.

Not only does the Nissan LEAF have a lower sticker price to begin with, but it’s eligible for the $7,500 Federal Tax Credit. The Chevy Bolt isn’t eligible, because it’s produced by General Motors, which has already reached its quota of available tax credits.

That means that if you make full use of the tax credit, the Nissan LEAF is over $12,000 cheaper than the Chevy Bolt!

Keep in mind, though, that depending on your income tax situation, you may not receive the full tax credit. Make sure you understand how the electric car tax credit works before factoring it into your decision.

As for warranty, there’s not much difference there: Both have a standard warranty on the battery pack that covers you for eight years or 100,000 miles.

Because both of these cars are all-electric vehicles, there’s not much difference in terms of how they work. Both have an electric motor and drivetrain, and need to be plugged into a charging station in order to charge. But how do their batteries compare? 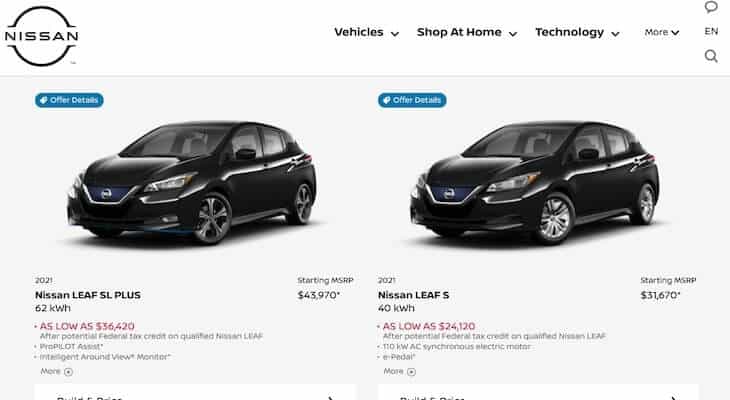 The U.S. Department of Energy gives it a combined city/highway miles per gallon of gasoline-equivalent (MPGe) of 111 and an annual fuel cost of $600. 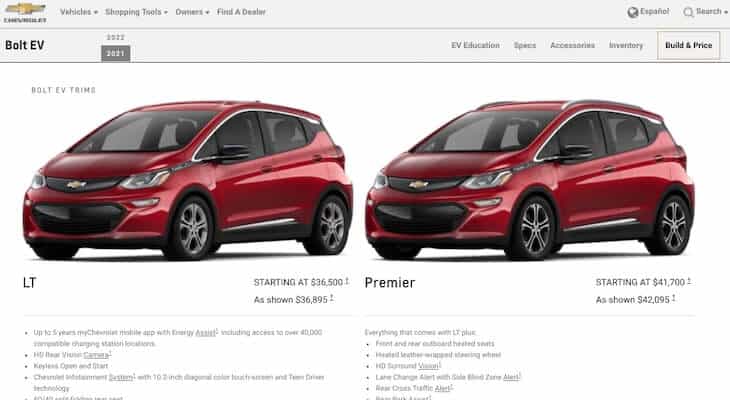 The Chevy Bolt comes with a 66-kWh battery, giving it a driving range of 259 miles per charge, significantly higher than the LEAF. It takes 10 hours to charge on 240-volt power, but a DC fast charger can deliver 100 miles of charge in 30 minutes.

It uses the Combined Charging Standard (CSS) connector for fast-charging, which is more widespread than CHAdeMO in the U.S.

The DOE gives it a combined MPGe of 118 and annual fuel cost of $550. That means the Chevy Bolt comes out ahead on several battery-related metrics.

When it comes to driving, both vehicles have some similarities: a touchscreen infotainment system that’s compatible with Android Auto and Apple CarPlay, and the ability to get from zero to 60 mph in less than seven seconds. Here’s where they differ. 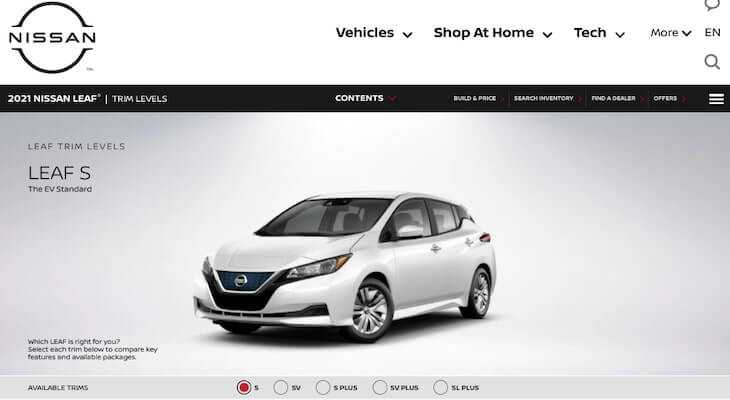 The Nissan LEAF has some impressive driver assistance features compared to the Bolt. You’ll get the ProPilot Assist system, which can help you stay in your lane and maintain your speed when driving on the highway. You’ll also get automatic emergency braking, collision alerts, and other safety features that come standard with the LEAF.

There’s also an e-Pedal option that lets you switch between the standard regenerative braking mode and one-pedal driving, so that the car slows down when you remove your foot from the accelerator. 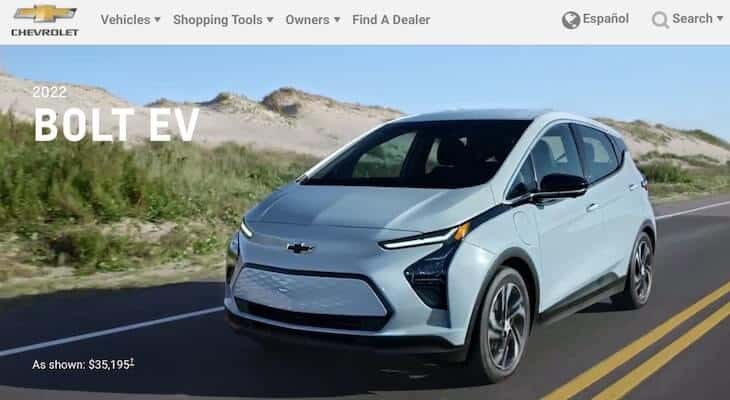 The Chevy Bolt also offers one-pedal driving, but it’s less convenient to turn on than in the LEAF and requires you to use the shifter. In addition, some of its driver assist and safety features are optional add-ons, and there’s no adaptive cruise control, giving the LEAF the advantage here.

Where the Bolt does shine is its display system, which offers real-time performance data so you can easily tailor your driving for maximum fuel efficiency. It also has HD cameras, including a rear camera mirror, while the LEAF does not.

The Bolt and LEAF are compact hatchbacks that manage to fit in a fair bit of legroom and storage space. Some trim levels come with heated seats and steering wheels, although neither of them have the same level of luxury stylings you’ll find in a Tesla or any other luxury EV.

Here’s how they compare in terms of interior dimensions and style. 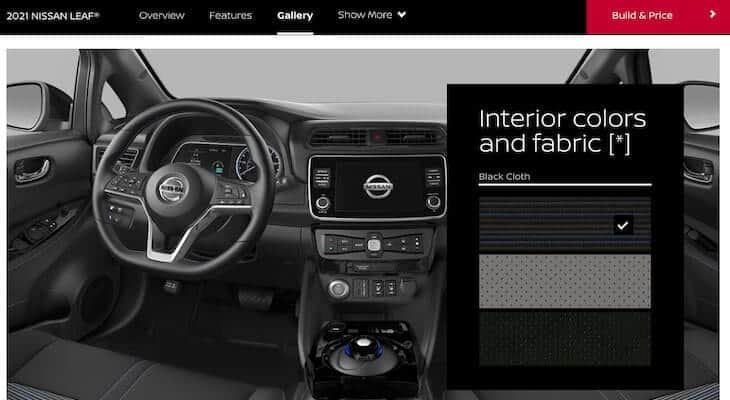 The Nissan LEAF is known for looking like a standard modern car: not too futuristic, but not too flimsy either. This gives it an edge over the Bolt, which has more plastic and less texture, especially when you consider the higher price tag.

The Nissan LEAF is also a slightly longer vehicle, with 24 cubic feet of luggage space when the rear seats are in place and 30 when they’re lowered. 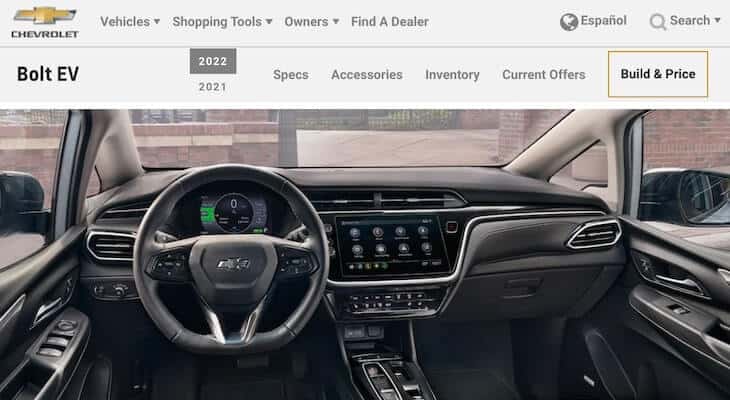 There’s also slightly more legroom in the backseat, and the floor is flat instead of raised in the center, which may make it more comfortable for passengers.

How to Choose Between the Chevy Bolt and the Nissan LEAF

Both the Chevy Bolt and the Nissan LEAF have their pros and cons, so it wouldn’t be fair to say that one car is clearly better than the other. That depends on your personal preferences, your budget, and your lifestyle.

If you’re shopping on price alone, then the Nissan LEAF is the clear winner due to its lower sticker price and eligibility for the federal tax credit.

But if you plan to drive long distances on a regular basis, the LEAF can’t compete with the Bolt, which has a larger battery capacity and over 100 additional miles of range.

In terms of design, both have trade-offs between storage space, driver assist features, and passenger comfort, so you’ll have to weigh what’s most important to you.

Consider a Used Car or a Lease

Before deciding between the two models, it may be worth looking into alternatives to a new EV, such as buying a used electric car or leasing a new one.

Buying a used EV can give you a wider range of models to choose from, which may have similar features as the 2021 model, but at a lower price point. Meanwhile, leasing can be a good way to drive off with the newest model at a more affordable price. You won’t have to deal with depreciation or high interest rates on a car loan.

Take it for a Test Drive

There’s no way to know for sure which electric car is right for you without getting behind the wheel. Be sure to go for a test drive to make sure that the car you choose is roomy enough, comfortable enough, and powerful enough for your driving habits.