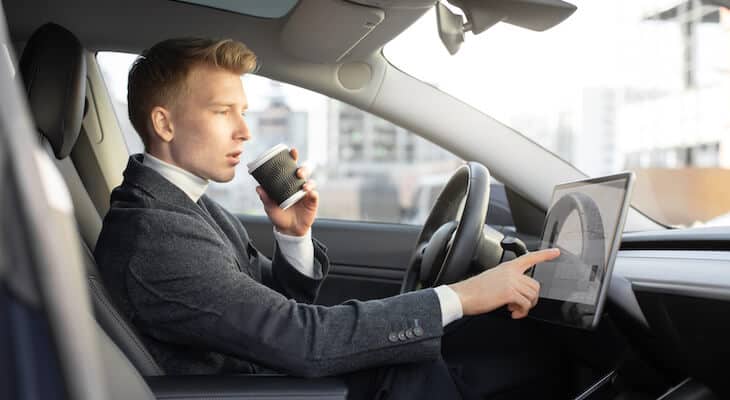 The Chevrolet Bolt EV and the Tesla Model 3 are two very different EVs. One is marketed as an everyday, affordable electric car and the other is a higher-end luxury model.

But with the release of the Model 3 in 2017, Tesla has come into competition with more affordable options like the Chevy Bolt and Nissan LEAF.

From pricing to performance, these two electric vehicles aren’t as far apart as they may seem. Here’s how the most recent models of the Chevy Bolt vs. Tesla Model 3 compare.

Both the Bolt and the Model 3 can fit five people comfortably, but the Model 3 is a four-door sedan while the Bolt is a five-door hatchback.

When it comes to aesthetics, Teslas are known for their futuristic look, while the Chevy Bolt is more functional, with a basic, minimalist design.

That doesn’t mean the Bolt lacks for comfort, though — you can upgrade to a package with leather upholstery and heated seats if you want more luxurious styling.

Other optional features on the Model 3 include a panoramic glass roof and a premium sound system with 14 speakers. 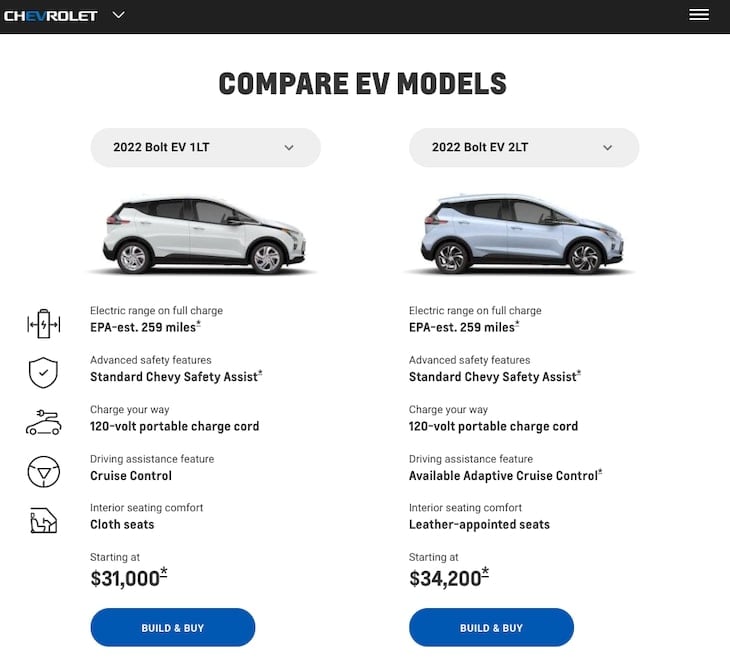 Price is one area in which the Bolt comes out ahead: the Bolt’s base model has a Manufacturer’s Suggested Retail Price (MSRP) starting at $31,000, while the Tesla Model 3 has a starting price of $39,990.

Still this, this is a closer call than it looks. Although the Model 3’s sticker price is more expensive than the Bolt, it also depreciates at a slower rate.

If you’re planning to buy a new Tesla, you can expect it to retain more than 90% of its value after the first few years of driving. The Bolt, on the other hand, could lose up to 50% of its value over the same timeframe. This is one reason why buying a used EV can be such a good deal.

It’s also worth taking the trim and upgrades into account when doing a head-to-head comparison. For example, if you choose the Model 3 Performance edition, the sticker price starts at $56,990, making the pricing difference even more apparent.

One area in which there isn’t much difference is the electric car tax credit. Although new EVs are eligible for a $7,500 tax credit, both Tesla and General Motors have maxed out their quotas, so you won’t be able to benefit from this incentive with either car.

Both automakers offer a standard warranty on the battery pack — 8 years or 100,000 miles — and shorter warranty on other vehicle components. 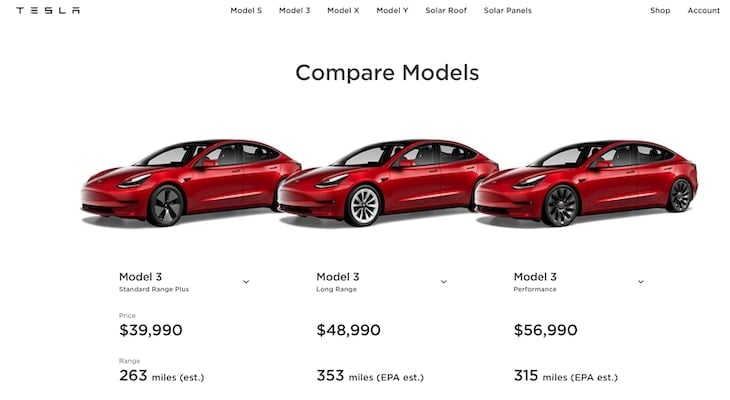 If you’re shopping based on driving range, then both the Chevy Bolt EV and the Model 3 should be able to address your range anxiety. The Bolt has an EPA-estimated range of 259 miles on a single charge, while the Model 3 gets just a little bit more at 263.

Upgrade to the Model 3 Long Range, though, and you’ll get a whopping 353 miles of range — one of the highest currently on the market — and the Performance edition will provide an estimated 315 miles of range.

The Chevy Bolt is equipped with a 65-kWh battery that can be charged in around eight hours using a 240-volt home charging station. You’ll need to purchase an upgraded port to use DC fast chargers, but these will allow you to charge at a faster rate of around 90 miles per 30 minutes.

The Model 3 comes with a 50-kWh battery (Standard Range Plus) or a 75-kWh battery (Long Range), which can also be charged in up to eight hours.

But when it comes to DC fast charging, the Model 3 can charge significantly faster, adding on more than 150 miles in 30 minutes thanks to the Supercharger network.

One advantage that the Bolt has over the Model 3 is that it’s easier to keep an eye on your battery life while driving. The Bolt has a digital display behind the steering wheel, but the Model 3 only has an infotainment screen in the center of the dashboard.

The Tesla Model 3 is the better-performing vehicle, with a wide range of driver assist and self-driving features such as Tesla Autopilot and adaptive cruise control.

The Model 3’s electric motor can accelerate from 0-60 mph in just 5.3 seconds, while the Performance clocks in at 3.1 seconds, both faster than the Bolt’s 7.0 seconds.

Additionally, the Bolt’s top speed is only 93 mph, while the Standard Range Plus can reach 140 mph and the Performance edition can go as high as 162 mph.

Both the Bolt and the Model 3 make use of regenerative braking, which captures the kinetic energy that would otherwise be lost when the car slows down or stops.

The Bolt is known for having more powerful regenerative braking, which can result in what’s called “one-pedal driving.” You can simply take your foot off of the pedal when you want to slow down and coast along without using the brake pedal.

The Model 3’s regen braking system isn’t as aggressive, but you can switch between multiple settings, including Hold, Roll, and Creep.

Finally, what’s the most affordable way to get behind the wheel of each of these cars? If buying a new EV is out of your price range, you still have several options.

First, consider buying a used electric car. Although buying a used Tesla may be nearly as expensive as buying a new car, Teslas require little maintenance and retain most of their battery capacity. A used Tesla could last you for another 100,000 miles or more.

Alternatively, leasing a Tesla can be a more affordable option than buying one. Monthly lease payments are usually lower than loan payments, so you may even be able to lease a Model Y or Model X at a reasonable price.

If you’re considering a Bolt, though, buying last year’s model or leasing a Bolt can be a better option than buying the newest release. That’s because they depreciate quickly, so you can find great deals on used Bolts that still have a lot of battery life left in them.

How to Choose Between the Chevy Bolt vs. Tesla Model 3 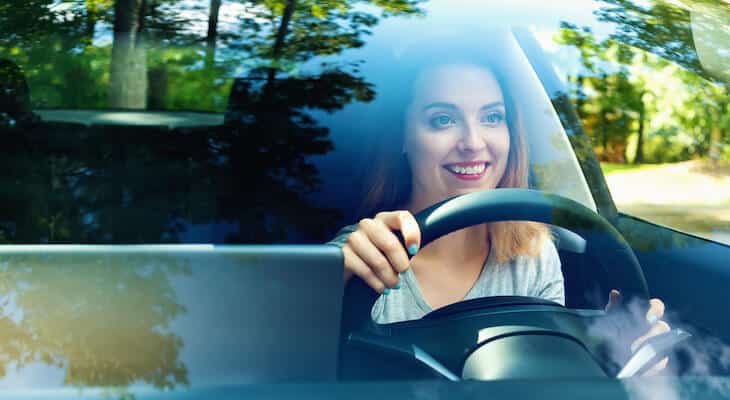 Choosing the right electric car for you depends on your budget and your driving habits. If you’re in the market for a luxury EV, then the Model 3 may be the better choice. It has cutting-edge battery technology and better handling and performance.

The Chevy Bolt is not to be overlooked, though. It has impressive range and features for the price point, especially for families and everyday commuters.

Whichever car catches your eye, be sure to take it for a test drive and compare fees and insurance costs in your area before making a decision!