How Much Does an Electric Car Cost? A Complete Overview The popularity of all-electric cars continues to grow across the United States. And while eco-consciousness is a big driver behind their increased sales, drivers are also feeling good about the prospect of never having to buy another gallon of gasoline.

If you’re in the market for a new car, chances are you’re considering what cost advantages you’d be able to get with an all-electric car (EV) over a vehicle with a traditional, gas-powered internal combustion engine (ICE).

While it’s easy to compare sticker prices when you’re pricing different vehicles online or at a dealership, evaluating the true long-term electric car cost versus an ICE involves a variety of factors and considerations.

From the amount you drive each week to differences in electricity rates nationwide, the average cost each EV driver pays on an annual basis is highly individualized.

That said, the benefits of choosing to drive an electric car are largely universal: reduced emissions, drastically reduced fuel costs, and lower annual maintenance costs when compared to driving a gas-powered vehicle.

Automakers often provide consumers with basic data regarding the cost of charging an EV and charging’s impact on your cost of electricity. So while the precise long-term cost of home charging and its impact on your electricity rates can vary significantly from driver to driver, we’ll use those estimates. Read on to get a better grasp on just what you’ll have to invest, and most importantly, what you could save.

Upfront Cost for an EV

Prospective EV owners should be clear on one thing before they go new car shopping: electric cars are more expensive to purchase. According to the United States Natural Resources Defense Council (NRDC), the average sticker price on a new electric vehicle is approximately $19,000 more than that of a new gasoline-powered vehicle.

So what is it that makes all-electric vehicles so expensive? Many EV brands, such as Tesla, are considered luxury cars, which means you’re paying a premium for upscale interior fabrics, components, and technology. But even mid-range all-electric vehicles such as the MINI Electric Hardtop are more expensive than gas-powered cars.

The reason for this is electric cars are powered by rechargeable lithium-ion batteries. This technology is already quite common and is the source of power that is utilized in the devices you run every day, like cell phones and notebook computers.

However, constructing a lithium-ion battery large enough to power a car requires even more of the expensive metals that are found within it, including cobalt, lithium, manganese, and nickel.

As the manufacturing process of electric vehicles becomes more streamlined, and the machinery required to build these cars improves, the upfront costs of producing electric vehicles is expected to lower. But for now, be prepared to pay more for an all-electric vehicle versus a gas-powered vehicle up front.

What Does Charging an Electric Car Cost?

The cost to charge an electric vehicle at public charging stations is pretty straightforward: According to the U.S. Department of Energy, rates for a Level 2 charge are around $1.00 per hour, while the average rate of a public DC Fast Charging unit is about $0.35 per minute, or $21 per/hour.

The cost of charging your EV at home is strictly dependent on the kilowatt-hour (kWh) rate your electric company charges.

kWh rates vary dramatically per state. In Hawaii, kWh can be as high as 32.76 cents per kWh, while in New York, the average rate is 19.30 cents per kWh. California, meanwhile, has an average kWh rate of 19.90 cents.

This chart illustrates how much it costs to charge an EV based on miles-per-month driven at the national average kilowatt-hour rate of 13.31 cents per hour.

Reaching a full charge will always be more affordable than getting a fill up. That said, electric rates fluctuate dramatically depending on which state you live in, including variances in kWh costs for peak and off-peak hours, particularly during warmer months.

Make sure to do a full survey of your particular kWh costs to determine exactly what your EV charging cost will be.

Many EV shoppers understand that when they purchase an all-electric vehicle, they’ll be saving on fuel costs. But what they don’t often initially realize is just how much easier, and therefore affordable, electric vehicles are to maintain. 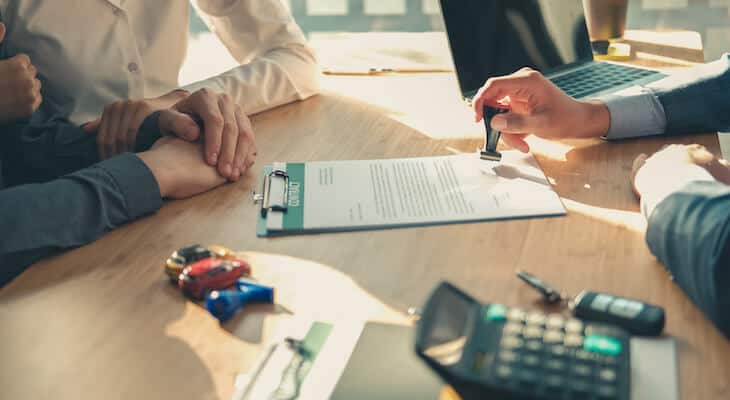 According to the U.S. Department of Energy, all-electric vehicles that you purchase new may be eligible for a federal income tax credit of up to $7,500.

The amount of your federal tax credit will vary based on the particular brand or type of EV you buy, depending on the capacity of the battery used to power the vehicle.

Many states also offer incentive programs for new EV purchases, which, utilized in combination with federal tax credits, can go a long way toward helping defer the cost of your new car.

Before you make the final decision to purchase an electric vehicle, keep in mind some additional cost considerations.

It’s also important to remember that automakers and engineers across the world are constantly working to make electric vehicle battery technology more affordable and easier to produce on a mass scale. As EV batteries and fast charging technologies become easier to produce, their initial upfront costs will likely decline.

Looking to reduce fuel costs without paying huge upfront fees? Consider EVs that are not all-electric, such as hybrid or plug-in hybrid cars, each of which offers considerable fuel savings and emits far fewer harmful gases than traditional gas-powered vehicles.

Get Informed Before You Buy

Choosing an electric vehicle can be a good investment both for your wallet and the environment. While there will likely be some higher upfront pricing for the vehicle and car insurance, the long-term savings (including lower maintenance expenses and possible tax credits) could make it well worth it. If you want to learn more about how much car insurance might differ with an electric car, enter your ZIP code below and get a free quote from Compare.com.