Electric Car Repair: Common Problems and How to Fix Them 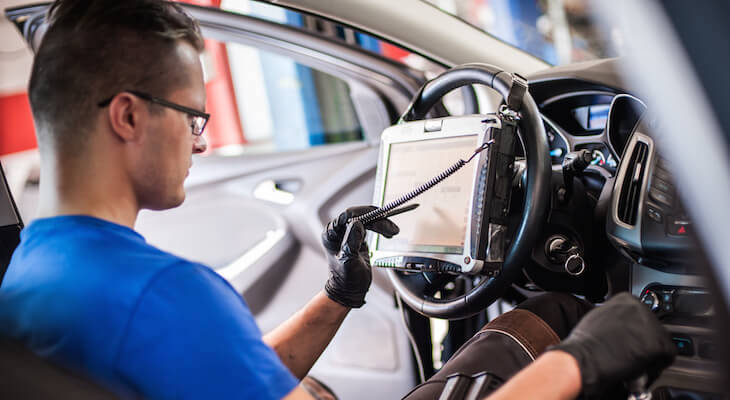 When electric vehicles first arrived on the scene, some drivers had concerns that they would need more frequent maintenance than conventional cars, and that you’d have to go to an expensive specialist to get anything done.

Fortunately, that hasn’t turned out to be the case. While some repairs, such as a Nissan LEAF battery replacement, can be on the pricey side, electric vehicles cost less to maintain overall than conventional cars and need less frequent checkups.

If your EV is giving you issues, or if you just want to know what kinds of costs to expect, here’s everything you need to know about electric car repair and maintenance.

When we say that electric cars cost less to repair and maintain than conventional cars, what do we mean? When you think about electric car repairs, you may be thinking of the battery pack and other high-tech components like the navigation system.

But the reality is that even conventional cars have onboard computers these days, and mechanics are becoming more familiar with high-tech electrical systems.

The biggest difference is that electric cars don’t have an internal combustion engine (ICE), so they don’t need oil changes and other common tune-ups. This isn’t the case for all types of electric cars: hybrid electric vehicles (HEVs) and plug-in hybrids (PHEVs) do require oil changes because they have an ICE in addition to their electric motors, but they typically use synthetic oil, which lasts longer.

Since EVs have fewer moving parts under the hood that can break down or malfunction, they require less maintenance overall than gas cars do. According to a report by AAA, “If maintained according to the automakers’ recommendations, electric vehicles cost $330 less [to repair] than a gas-powered car, a total of $949/annually.”

Where to Take Your EV for Repairs

All new electric cars sold in the U.S. come with a warranty on the battery pack that lasts for up to eight years or 100,000 miles. The manufacturer may also offer a warranty on other components, but these warranties are usually shorter, such as three to five years.

If you bought your EV from a licensed dealership, then chances are there’s a service center on site where you can bring your electric car for repairs and maintenance. You’ll need to go here if you want your EV repairs to be covered by the warranty.

If you bought your EV used or it isn’t under warranty, then you can go to any auto repair shop that works on electric cars.

Keep in mind that there are lots of electric cars out there, and some automotive shops may specialize in repairing some brands and not others. It may be harder to find an EV repair shop in rural areas than it is in major cities.

What happens if you break down and need to get towed? Some car companies offer remote diagnostics and mobile repair services to make EV repairs even easier. Tesla claims that 80% of repairs don’t require a visit to the mechanic, and offers roadside assistance and mobile service coverage throughout the U.S. Electric cars may have lower maintenance and repair costs than gas-powered cars, but those costs aren’t zero. It’s worth going over a few of the most common electric vehicle repair issues you might encounter, and how much it costs to fix them.

When it comes to electric car batteries, there are two things that can cause you trouble: the first is the conventional 12-volt battery and the second is the lithium-ion battery.

If you’re having trouble starting your car, the first thing to check is the 12-volt battery, just as you would with a gas-powered car.

The lithium-ion battery is the more serious EV repair issue. While electric car batteries lose some charging capacity over time, certain conditions, such as overheating, can speed up the degradation process.

Newer models have advanced thermal management systems, so this isn’t as much of a worry as it once was. Electric cars can last as long as conventional cars, if not longer.

But if your EV battery capacity does take a nosedive — and your warranty has expired — you may have no choice but to replace it out-of-pocket for several thousand dollars.

Now that we’ve gotten the big one out of the way, the other electric vehicle repair issues you might encounter are pretty straightforward.

As with any car, it’s important to keep your EV cool to avoid overheating. While EVs are less likely to overheat, they are sensitive to extreme temperatures, and running the air conditioning in extreme weather conditions can impact overall battery health.

EVs are built to keep themselves cool, so if your car is overheating, it may be a coolant issue. Check the owner’s manual to find out the recommended maintenance schedule, since this can vary a bit from model to model.

For example, the Chevy Bolt EV only needs to have its coolant replaced every 150,000 miles, while Tesla doesn’t recommend changing the coolant in the Model S at all.

Ask a mechanic if you have any concerns, since trying to change the coolant yourself may void the warranty.

Electric cars use a system called regenerative braking, which conserves energy from slowing down or stopping your vehicle by using it to charge the battery. Some electric cars even have a one-pedal driving mode that allows you to slow down by lifting your foot off the accelerator instead of pressing on the brakes.

The good news is that this significantly expands the life of your brake pads, since they aren’t subject to as much pressure as standard brakes.

However, they still need to be serviced occasionally. Tesla recommends checking the brake fluid every two years and changing it depending on its condition.

If you’re new to regenerative braking, then one-pedal driving mode may feel a little different at first. Get used to how your brakes feel so you’ll be able to recognize any issues before they become a problem.

Most brake parts, such as brake pads and brake discs, will last longer than they would on a conventional vehicle, but still need to be replaced when they wear down. Drivers of fully electric cars and hybrids can expect fewer repairs and fewer problems than drivers of conventional cars. Still, it’s important to take good care of your electric car to extend its battery life and maintain its resale value.

You should keep an eye out for any unusual fluids underneath or inside your car, as well as corrosion or debris in the charging port or electrical components.

Other car parts, such as your windshield wipers, lights, and turn signals will also need to be replaced occasionally, but this should be relatively straightforward.

The biggest EV repair cost is a battery replacement, but by maintaining good charging habits and following the recommended maintenance schedule, you’ll be able to extend the lifespan of your electric car battery so it lasts as long as possible.

Use this tool to find the best electric cars for sale near you.