The Electric Car With the Longest Range (and the Runners Up) All cars have a range — the distance you can go before you run out of gas — but with gas cars, you don’t have to worry about it as much because you can refill the gas tank pretty much anywhere.

With electric cars, it’s a different story. Not only do electric vehicles have a shorter range than most gas cars, it can be hard to find a charging station in remote areas.

The good news is that that’s changing quickly, and electric cars are catching up when it comes to charging speeds, miles of range, and battery capacity.

Here’s everything you need to know about electric car range, as well as our pick for the best electric car with the longest range (and a few runners up!).

Before you buy any new car, it’s important to understand the specs: How fast does it go? What’s its fuel economy? Does it have front-wheel drive or all-wheel drive?

When it comes to buying an electric vehicle, you’ll also want to consider the car’s battery capacity and charging speeds.

As a general rule, the bigger the battery pack, the more miles you’ll be able to drive on a single charge, but this can vary depending on your speed and driving conditions. If you keep the A/C running or let the kids play video games on the infotainment console for hours, that can reduce your overall driving range.

Some automakers advertise their own range estimates, but for the most accurate specs, you’ll want to look up the car’s real-world range estimates provided by the EPA.

Another thing to consider is how easy it will be to recharge your EV battery when it runs out. Will you have access to fast charging stations, like Tesla’s Supercharger network? Or will you have to head home to charge your car overnight on AC power?

Both options will do the job, but knowing your car’s estimated range and keeping an eye on your battery levels can go a long way toward reducing range anxiety.

If you’re looking for the electric car with the longest range, we can give you a one-word answer: Tesla. But the reality is a little more complicated. Even among Tesla models, there can be a significant difference in range between each trim and model year.

Likewise, the EPA-estimated range can vary between electric and hybrid models of the same vehicle, such as the Hyundai IONIQ Electric vs. Plug-In Hybrid.

EV battery technology is evolving rapidly, so keep in mind that the electric car with the longest range today may be a runner up tomorrow!

Here are our picks for the longest range electric cars currently on the market: The Tesla Model S has the longest driving range of all Teslas — or any EV, for that matter — with 405 miles of range on a single charge. The Model S has a battery capacity of 100 kWh (kilowatt-hours) and an all-wheel drive dual motor.

Other runners-up include the Tesla Model X and Model Y Long Range. Be sure to shop around, since other Tesla trims (such as the Model S Plaid and Model Y Performance edition) all have slightly different miles of range than the Long Range versions. The Ford Mustang Mach-E Premium edition gets 300 miles of range on a single charge — not as much as a Tesla, but still pretty high for an electric sports car. Choose the more expensive California Route 1 edition and you’ll get up to 305 miles of range.

The Mustang Mach-E comes with either rear-wheel drive (RWD) or electric all-wheel drive (eAWD) and a horsepower of up to 480 HP depending on the trim.

While the Mach-E’s battery capacity should put your range anxiety at ease, it’s worth knowing that it charges more slowly than a Tesla battery pack: It can reach charging speeds of up to 150 kW compared to 250 kW using a Tesla Supercharger. Volkswagen has several electric cars in the works, including the upcoming ID.Buzz, an electric microbus that’s expected to get 300 miles of range. For now, your best bet is the ID.4, a crossover SUV with 260 miles of range and a starting price of $39,995.

For a more affordable EV, you can look into buying a used electric car like the e-Golf, which only gets 125 miles of change but can be found for less than $10,000.

Runner Up: BMW i3 The Chevy Bolt EV has been redesigned for 2022, with an EPA-estimated range of 259 miles per charge and a starting price of $31,000. That makes it one of the longest range electric cars available at this price point.

The Chevy Bolt offers One-Pedal driving using regenerative braking and a Sport Mode with responsive acceleration. You’ll also get access to the myChevrolet Mobile App, so you can plan your trip to maximize your range and minimize charging times.

Not only that, but Chevrolet is offering to cover the cost of a Level 2 home charging station, which could cost you up to $2,000 out of pocket. The Hyundai KONA Electric gets 258 miles of range, just one mile less than the Bolt and all the more impressive considering that it’s a crossover SUV and not a hatchback. With a starting price of $34,000, it’s a fairly affordable electric car too.

As with all new electric cars sold in the U.S., you’ll get a warranty on the powertrain and battery pack. Hyundai’s warranty is longer than the industry standard, covering you for 10 years or 100,000 miles, as well as three years of “complimentary maintenance.”

Choose an Electric Car With Enough Range for You 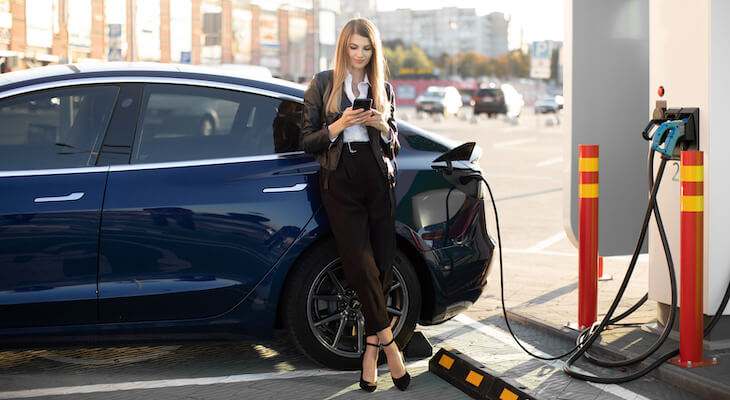 With all this talk of range, you might think it’s the most important thing to consider when buying an electric car, but it’s only one piece of the puzzle.

If you work close to home and can charge your battery every night, you may be better off buying an EV with less range but with other key features, such as cargo capacity.

For example, electric minivans and SUVs tend to have less range than sports cars, but may be a better choice for drivers with pets or families.

As long as the car you choose has enough range for you, then you can easily get where you need to go and save money in fuel costs compared to a gas car.

You can use this handy tool to compare used electric cars available near you, or learn more about the top 10 leaders in electric car range here.