Hatchbacks were some of the first EVs to hit the road in the U.S., starting with the Toyota Prius hybrid in 2000. Lately, other types of electric vehicles — like crossovers and pickup trucks — have been generating a lot of buzz, but electric hatchbacks are still some of the best electric cars out there due to their range and reliability.

Whether you want a roomy new car with lots of cargo space, or a luxury EV with all the latest stylings, you’ll find plenty of options among these models.

Here are our picks for the best electric hatchbacks of 2022, along with our thoughts on their specs, starting price, and safety features.

Automakers are always adding new models and variants to their lineup, so these seven electric hatchbacks are just a sample of what’s on the market.

If you include other small electric vehicles, such as coupes and sports cars, you’ll have even more options to choose from. 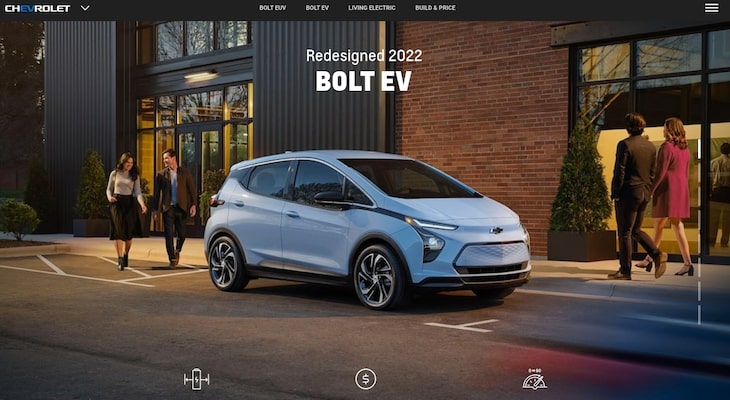 The 2022 Chevy Bolt comes in two variants: the standard electric version and an EUV (electric utility vehicle) that’s slightly larger and roomier. While a battery recall in late 2021 resulted in production delays, the Bolt EV is known for its reliability, and this is likely to be only a temporary mark on its reputation.

Otherwise, the Chevy Bolt has an EPA-estimated range of 259 miles and gets 120 miles per gallon of gasoline equivalent (MPGe).

The base model comes with a front-wheel powertrain with 200 horsepower that can take the car from 0 to 60 mph in 6.5 seconds. The Nissan LEAF is the Bolt’s closest competitor, with a similar hatchback design and set of standard features. You’ll get folding rear seats with 30 cubic feet of cargo space, as well as an 8-inch infotainment touchscreen with driver-assist features.

The LEAF has a smaller battery pack than the Bolt, meaning you’ll only get 226 miles of range on a full charge. It’s also more affordable, with a starting price of $27,400. 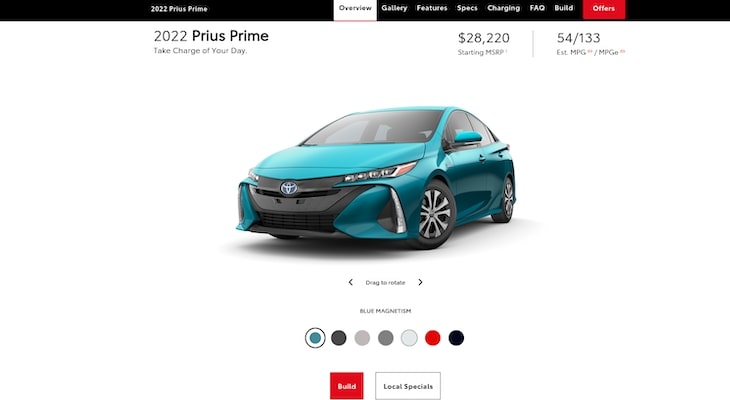 The Toyota Prius Prime is the first hybrid on our list, giving you the benefits of a hybrid powertrain with both a battery and a gas engine. You’ll get up to 25 miles of range on pure electric power, and up to 640 miles using both electricity and gas.

You’ll also get an enhanced hybrid battery warranty that extends coverage from eight years to 10 years or 150,000 miles. 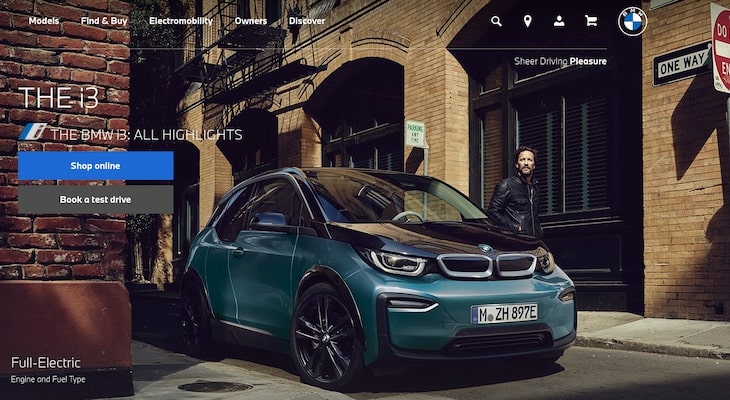 The BMW i3 is being discontinued in the U.S. as of mid-2021, but that doesn’t mean you can’t find a good deal on a used i3 on the secondhand market.

What does the BMW i3 have going for it? In short, its upscale interior compared to other electric hatchbacks, and its quirky rear doors, which open backwards to give you more room for getting in and out of the vehicle and loading cargo. 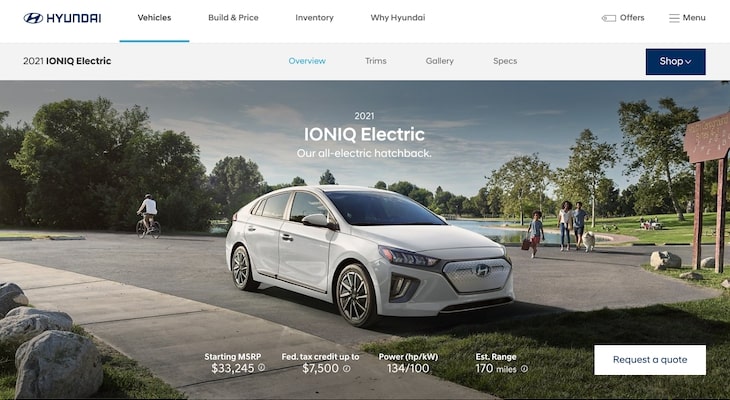 The Hyundai IONIQ is notable because it’s one of the few electric hatchbacks that comes in three different variants: hybrid, plug-in hybrid, and all-electric.

While the starting price and fuel economy is different for each, the IONIQ Electric has the lowest annual fuel costs and lifetime ownership costs. It comes with a 38.3 kilowatt-hour battery pack and has an EPA-estimated range of 170 miles. The MINI Cooper Electric SE Hardtop is the only two-door hatchback on our list, with a starting price of $29,900. Although it only gets 114 miles of range, it has fast charging speeds and can reach 80% power in 36 minutes at a DC fast charging station. 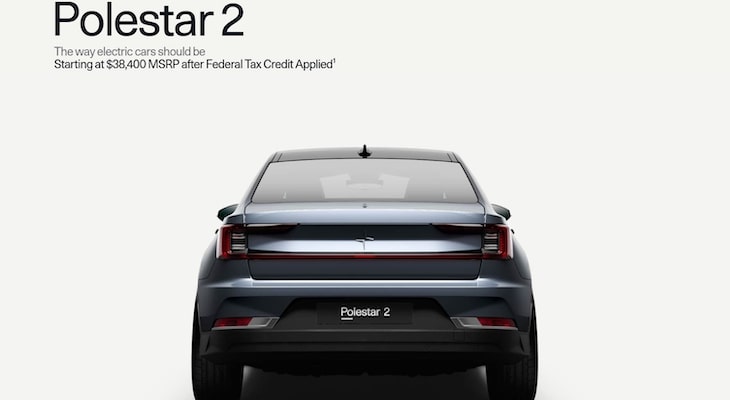 Finally, there’s the Polestar 2, a luxury electric vehicle that gets an impressive 270 miles of range on a single charge. The base model starts at $47,200, but this EV is eligible for the electric car tax credit, which can put some of that money back into your pocket.

The Polestar 2 has a hatchback design, but drives more like a sedan, and is available with either single-motor front-wheel drive or a dual-motor all-wheel drive.

What to Look For in an Electric Hatchback

Electric hatchbacks may share a general design, but they differ widely when it comes to driving range, cargo space, and overall practicality.

Here are a few things to keep in mind as you compare models and trim levels:

Another thing is that plug-in hybrids, like the Toyota Prius Prime, can be plugged into a wall charger or a fast charging station, while conventional hybrids can’t.

If your priority is reducing your fuel costs and lowering your emissions, then choosing an all-electric version is the way to go. But if you have a long commute and want to be able to fill up at your usual gas station, then you may be better off with a hybrid.

Speaking of range, how far can electric hatchbacks drive these days? The Chevy Bolt gets 259 miles of range on a full charge, which is on the high end of the spectrum.

It’s no match for the Tesla Model X Long Range, which gets more than 300 miles, but it has more range than most other hatchbacks at its price point.

If you’re buying a used EV, it’s important to check the current state of the battery pack, since excessive fast charging cycles can diminish battery health over time.

Fortunately, all new electric vehicles sold in the U.S. come with an 8-year/100,000-mile warranty on the battery pack, which covers the cost of a replacement if it’s no longer able to hold a sufficient charge.

Hatchbacks have plenty of things going for them, but one area in which they don’t stand out is size. While most hatchbacks are 5-seaters, they just don’t have as much legroom or cargo space as crossovers and SUVs. If you have a large family, then you may want to buy an electric minivan or 7-seater SUV instead.

That said, hatchbacks may be compact but they aren’t tiny, and you’ll still have room for pets or large luggage if you put the seats down. Just be sure to double-check the specs of each model to make sure it has enough room for your lifestyle.

How to Find an Electric Hatchback Near You 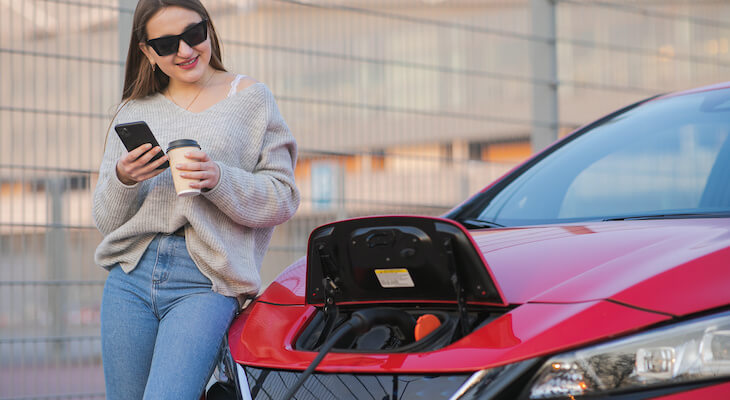 Some of these hatchbacks are brand-new versions and may only be available to lease or buy new, but others have been around for awhile and are easy to buy used. As long as you check the battery health and vehicle history, buying a used EV can be a great way to get one of these popular electric hatchbacks at an affordable price.

You may get slightly less range and battery capacity than if you buy a brand-new car, but you’ll still get the benefits of lower fuel costs and reduced emissions.

Use this tool to look for used electric cars near you and see what’s available.