The Thrill is On: Top 5 Electric Performance Cars 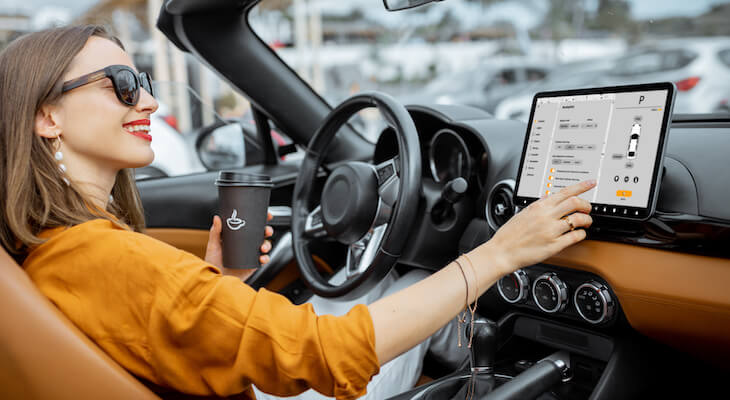 Automakers like Chevrolet, Honda, Kia, and Toyota appear to have taken a significant hold of the electric vehicle market. Their array of affordable, efficient all-electric and plug-in hybrid SUVs, hatchbacks, and crossovers are great for everyday driving. But they leave performance enthusiasts asking: Isn’t there an electric car for us?

A performance car can be loosely defined as an automobile that has a more powerful engine than standard vehicles, making it capable of far superior speeds. The advanced speed of performance cars also requires that they offer a more agile and responsive driving experience.

The more electric performance cars such as these continue to evolve, the more likely old speed records from internal combustion engines are likely to fall.

What to Consider When Buying an Electric Performance Car

There are several things to consider when purchasing an electric performance car. For starters, make sure the warranty is sufficient enough to cover unforeseen repairs throughout the duration of your ownership. The current industry standard for electric car batteries is eight years or 100,000 miles.

Lastly, make sure your vehicle is outfitted with a robust security and anti-theft system. Purchasing a performance car is a large investment, and its increased value and potential rarity make these types of cars a common target of thieves.

Thirsting for a battery electric, sporty car that can bolt off the starting line? This list of five of the top electric performance cars, listed in order of top speed, features everything from luxury electric SUVs that can be driven every day, to next-gen hypercars best suited to closed race tracks. This list just scratches the surface of what the future of electric performance cars holds. 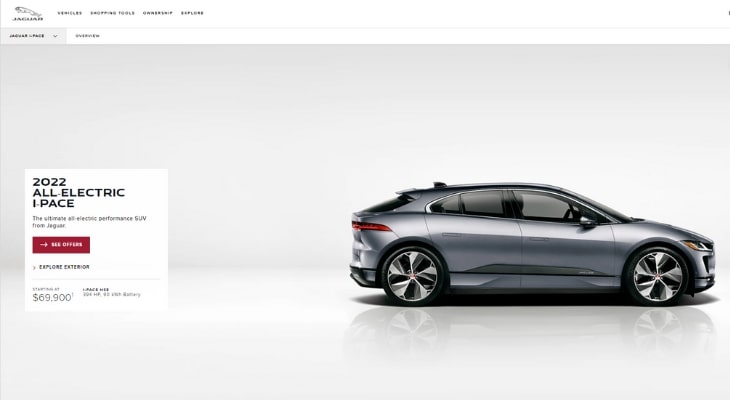 Of all the speedsters on this list, the hefty $69,900 starting price for the Jaguar I-PACE is actually the most affordable. Not only that, the hatchback-like design of the I-PACE also lends to its practicality as a daily driver in ways other vehicles on this list can’t attest to.

But while the Jaguar I-PACE can work as an everyday driver, it’s an all-electric performance car at heart. Thanks to a 0-to-60 mph time of 4.5 seconds and a top speed of 124 mph, the I-PACE can hang with any sports car. The car’s all-wheel drive (AWD) transmission offers 394 horsepower with 512 lb-ft of torque, which leaves other all-electric SUVs in the dust.

Unlike some of the cars on this list, it’s no supercar, but it’s certainly no slouch. Jaguar’s luxury electric crossover also features configurable driving dynamics, allowing drivers to personalize driving features like throttle sensitivity, steering weight, and engine response. 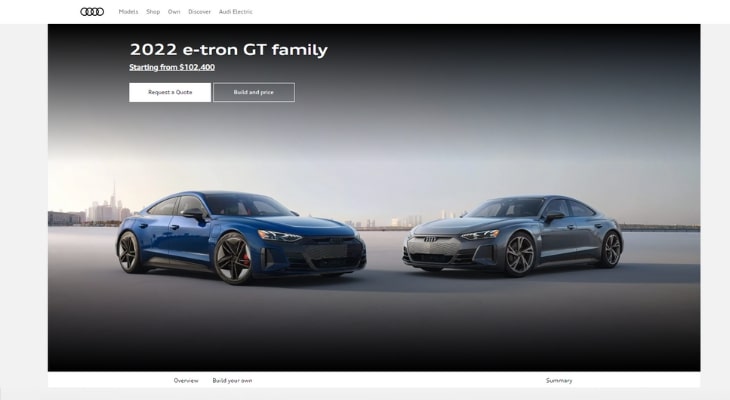 Audi has expanded its fleet of all-electric vehicles catering to commuting professionals and families, but that portion of their lineup has always been rooted in the brand’s performance heritage.

The Audi e-tron GT is an incredibly modern combination of speed, comfort, and style. The car’s powertrain features an all-electric dual motor system capable of a head-turning 637 horsepower and a 0-to-60 mph time of 3.1 seconds.

The Audi e-tron GT also features “virtual cockpit” technology that illustrates logistics like speed and navigation coordinates directly on the windshield to cut down on distracted driving. It’s a car that offers a unique blend of luxury, technology, and speed for everyday driving. 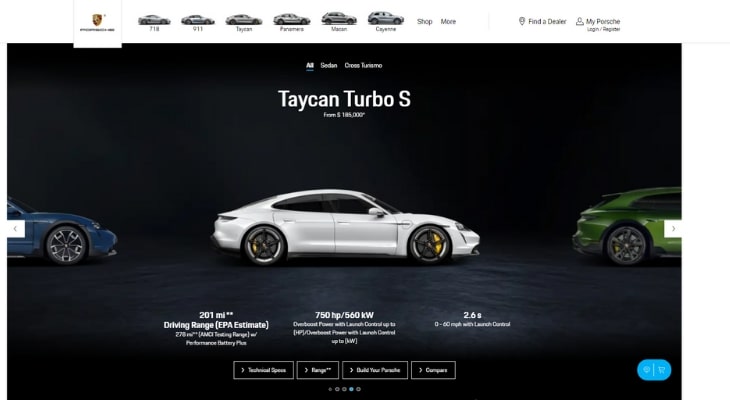 While Porsche has marketed its all-electric Taycan Turbo S sedan as an everyday driver, the car’s $82,700 starting price tag places it out of reach for most drivers. But that doesn’t make its design any less admirable.

The car’s 201-mile EPA estimated driving range on a full charge leaves a little bit to be desired, but it’s certainly 201 miles of incredible power. The car can reach 60 mph in 2.6 seconds, thanks to its cleverly engineered dual electric motor system. One engine powers the rear wheels, while the other powers the front wheels.

Porsche has also separated itself from its electric performance car competition by offering 17 standard exterior color options, in addition to a custom color option that’s available at additional cost. 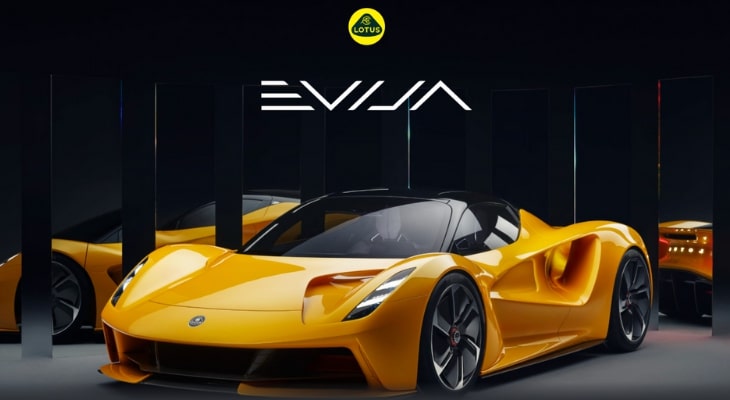 The Lotus Evija is a true supercar, thanks to its astonishing top speed capability and futuristic exterior design. Designed to expand the idea of what the hypercar of tomorrow can be, only 130 Lotus Evijas will be produced, thus the exorbitant price tag.

While electric cars designed for everyday use offer full-charging times ranging between 25 and 40 hours, the Lotus Evija offers a glimpse toward the future. This hypercar‘s battery pack can be fully recharged in about 18 minutes, more than enough time to grab lunch or load up on snacks while the car charges.

And while the car’s selling point is its futuristic design and engineering, Lotus has drawn on design elements for both the interior and exterior that harken back to the brand’s gas-powered race cars of the 1950s, most notable in the vehicle’s spherical window designs. 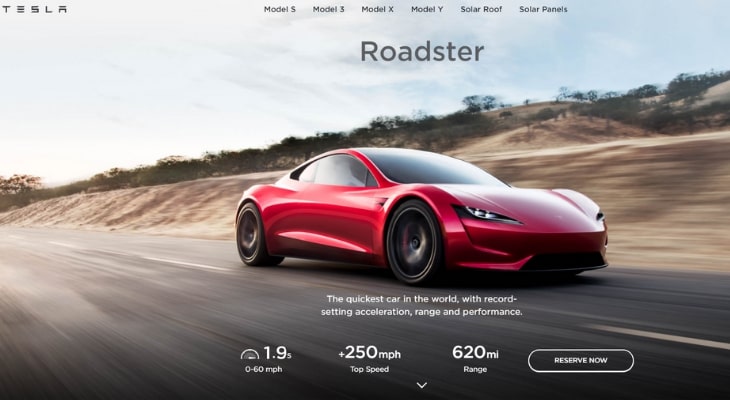 With a “reasonable” starting price of approximately $200,000, Tesla’s all-electric Roadster is practically a bargain compared to the Lotus Evija, while offering more speed capability.

That said, the yet-to-be-launched Tesla Roadster‘s alleged top speed of 250 mph and 0-to-60 mph time of 1.9 seconds aren’t the only categories in which it beats Lotus and every other electric performance car on this list. The latest edition of the Roadster‘s full-charge range of 620 miles nearly triples that of the Evija.

In addition, the Tesla Roadster will offer a four-person seating capacity despite its incredible performance capability. The car is designed with three electric motors, one in front and two at the rear. The system allows for all-wheel drive capability and independent wheel-gripping during cornering.

Before You Hit the Road

If you’re considering purchasing one of these electric performance cars, keep in mind that much like gas-powered cars, the more expensive a vehicle is, the more expensive it is to insure. That said, no matter which electric car you choose, you may be eligible for state and federal tax refunds that can reduce the initial cost of your vehicle dramatically.