Home Electric Cars Guides Electric vs. Gas Cars: Which One is Better for You?

Electric vs. Gas Cars: Which One is Better for You? Electric cars are finally having their moment. Not only are more drivers choosing electric and hybrid vehicles for their next purchase, but several automakers are planning to phase gasoline cars entirely out of their production lines over the next few decades.

Even with all the hype, you might still be wondering whether now is the right time to buy an EV. Should you switch from a gas-powered vehicle or wait until prices go down and more charging stations are available?

We’ve weighed the pros and cons of electric vs. gas cars to help you compare them in three different areas: environmental impact, ownership costs, and range.

Electric vs. Gas Cars: What Are the Differences?

First, let’s get clear on how electric and gas vehicles are categorized. Depending on how you define them, there are four main types of electric cars:

Hybrids (HEVs) — like the Toyota Prius — have an electric battery pack that gets charged by an internal combustion engine, so it can be refueled with gasoline at your standard gas station and doesn’t need to be plugged in to be recharged. Plug-in hybrids (PHEVs) are similar, but have an additional feature — they can be plugged in to a power source to be recharged.

Battery electric vehicles (BEVs) can only be powered by plugging them in, and don’t have a gas tank or internal combustion engine.

So while it can be helpful to talk about electric vs. gas cars as an either/or option, the reality is that there’s a whole spectrum of options between all-electric vehicles and conventional cars. Let’s look at some of the key differences between them.

One of the main reasons that people purchase electric cars is because they want to reduce their vehicle emissions and their reliance on fossil fuels. That said, there are plenty of myths about electric cars out there, and some drivers may have questions about whether electric cars really are better for the environment.

Aren’t lithium batteries harder to recycle than conventional car batteries? Will you just be switching from one type of fossil fuel to another?

The Union of Concerned Scientists did the math and found that “battery electric vehicles (BEVs) representative of those sold today produce less than half the global warming emissions of comparable gasoline-powered vehicles, even when the higher emissions associated with BEV manufacturing are taken into consideration.”

This means that if you own your electric car for at least six months, you’ll make up for any extra emissions produced in the manufacturing process.

While it’s true that some regions still rely on coal plants for electric power, more and more states are shifting to renewable energy sources like wind, solar, and hydro. You can even install home solar panels to power your EV entirely on solar power.

If you drive a hybrid car, this situation is a little different. Because hybrids still have a gas tank, they won’t eliminate your reliance on fossil fuels, but they can reduce it.

The winner: Electric vehicles. While EVs aren’t a silver bullet to stop global warming, they’re miles ahead of gas cars when it comes to reducing energy emissions. 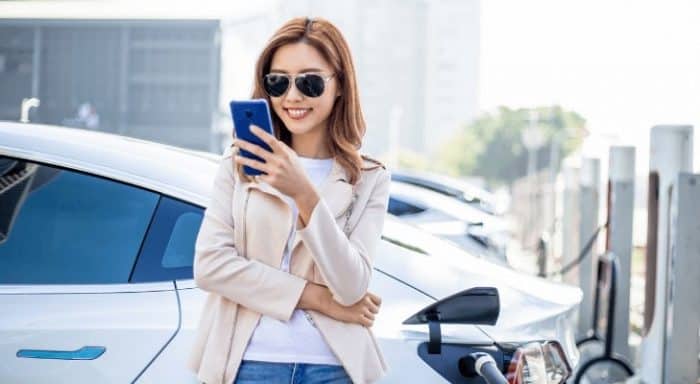 The next factor to consider before buying a new car is whether an EV or a gas car will be better for your budget. Let’s compare them in three areas: fuel costs, maintenance, and sticker price.

There’s no denying that, on average, electric cars have a higher purchase price than gas cars. But that doesn’t necessarily mean you have to spend more to buy an EV. For one, you can find plenty of used EVs and hybrids under $10,000 that are still just as energy efficient as they were when they rolled out of the factory.

Even if you do buy a new EV, many states offer rebates and tax credits on electric cars that can reduce your purchase price by thousands of dollars. You can also get rebates on home charging stations that you can use to charge your EV at home.

The winner: Gas cars. They’re still cheaper than electric cars, but not by much — and that may be changing as automakers rethink their manufacturing priorities.

Fuel economy is where EVs really come out on top. While gas prices go up and down, electricity costs are usually more stable, so you can calculate how much it will cost to charge an EV in your area based on what you’re currently paying for electricity.

The Department of Energy reports that the annual fuel cost for the 2020 Hyundai Ioniq Electric is $500 per year — compared to $800 per year for the conventional Ioniq. The gap is even larger for less fuel-efficient cars.

While the exact math will vary depending on the average cost of fuel in your area, how much you drive, and which charging method you use, the cost savings can add up quickly. One study found that in Washington state, drivers can save as much as $15,000 in 15 years by choosing an EV instead of a gas car when buying a new vehicle.

That’s higher than the national average, and well above some states, like Hawaii, where the cost of owning electric vs. a gas car is a bit more of a toss-up.

The winner: EVs. Electric car owners spend less money on fuel than conventional car owners — but the charging method you use can make a big difference.

Maintenance is one of the biggest — and most unpredictable — costs of conventional car ownership. Gas-powered vehicles have an internal combustion engine with a lot of moving parts that need frequent tune-ups and replacements.

Electric cars, on the other hand, have an electric motor with very few moving parts. While air filters, brake pads, tires, and other components still need to be replaced occasionally, there’s no need for regular oil changes and other pricey services.

The most expensive component to replace is the lithium ion battery, but that’s often covered under warranty. EVs have longer warranties than gas cars — usually up to 100,000 miles or eight years of coverage.

The winner: EVs. EV owners have fewer components to worry about, and they can usually count on longer warranties than conventional car owners.

The last major difference between gas and electric cars is range. How far can you drive on a single tank of gas or a fully-charged battery?

The Department of Energy calculates that the median range for conventional vehicles is 412 miles — from 240 at the low end to 703 at the high end.

As of 2020, the median range for electric vehicles is just over 250 miles, while the maximum range is slightly above 400. That’s a sharp contrast from 2011, when both figures were under 100 miles. It shows just how quickly battery technology is improving.

Of course, range is just part of the picture. What makes gas cars so convenient is that you can stop at any gas station and fill up the gas tank in under five minutes.

To charge an electric car, you’ll have to find a public charging station and wait for the battery to charge. EV charging technology is improving too, and these days a DC fast charger can get your battery to an 80% charge in 30 minutes.

Still, fast charging stations aren’t available everywhere, so you’ll have to plan ahead if you’re driving through a remote area or visiting an unfamiliar city.

Whether or not that’s a dealbreaker for you will depend on your lifestyle, but with a little bit of planning, recharging an EV can be nearly as convenient as fueling a gas car.

The winner: Toss-up. EVs are still better suited for commuters than for road-trippers, but that’s changing as public charging stations become more widespread.

Should You Buy a Gas or Electric Car? If current trends are anything to go by, then we’re all going to be driving electric vehicles sooner or later. So is now the right time to get one?

If you’re looking for an eco-friendly car, then electric vehicles are the clear winner. They also perform better when it comes to fuel economy and maintenance costs.

The main thing that gas-powered cars have going for them is that they’re cheaper, and the infrastructure to refuel them is already well-established around the U.S. For some drivers, that may be the deciding factor.

But for most drivers, the case for electric cars is more convincing — and it’s only going to get stronger as time goes by.