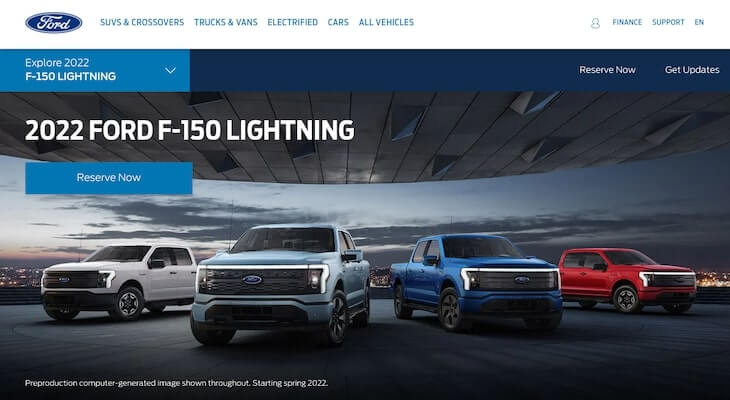 So far, most of the electric cars and hybrids available in the U.S. have been small to midsize cars: hatchbacks like the Chevy Bolt and Nissan LEAF or crossover SUVs like the Hyundai Kona and Kia Niro.

But with U.S. automakers like General Motors committing to go all-electric over the next few decades, it’s only a matter of time before larger EVs hit the market.

At the front of the line are two electric pickups — the Ford F-150 Lightning and the Tesla Cybertruck — both of which take very different approaches to design and performance.

If you’re trying to decide between a Ford vs Tesla truck, this guide will help you figure out which 2022 electric pickup truck is right for you. A quick glance at the concept art for these two electric trucks demonstrates that these are very different vehicles indeed. The electric F-150 Lightning is based on the same design as the gas-powered Ford F-150 — one of the best-selling trucks in America — so it isn’t obvious that it’s an electric vehicle at first.

The Tesla Cybertruck, on the other hand, has a more futuristic look, with an angular design and a stainless steel exterior that gives a clue to its inner workings.

The base model of each truck is remarkably similar when it comes to price, range, and towing capacity, but the Tesla offers more power if you choose a higher trim.

Let’s take a look at how their pricing options and release dates compare.

The Lightning’s base model comes with a dual-motor drivetrain, while the Cybertruck comes in a single-motor, dual-motor, or tri-motor version. The dual motor will set you back $49,900, while the tri motor costs an even steeper $69,900.

The Lightning’s motor provides 426 horsepower, while the Cybertruck is estimated to get up to 800 horsepower depending on how many electric motors it has.

If either of these electric trucks appeal to you, when can you expect to park one in your driveway? Although you can order a Cybertruck now on Tesla’s website, you’ll still have a while to wait, with initial production planned for late 2021 or early 2022.

One benefit to pre-ordering the Cybertruck now is that you can lock in the price for the Full Self-Driving system. All Teslas come with the semi-autonomous Autopilot system, but the more advanced system costs an additional $10,000 on top of the base price.

Ford is also taking pre-orders, and will be rolling out the Lightning on a similar timeline, with the first shipments expected in spring 2022.

Aside from the surface differences and pricing options, there are plenty of other factors to keep in mind when deciding between a Tesla Cybertruck vs a Ford F-150 Lightning.

From payload and storage capacity to handling and performance, here’s what you need to know about each truck’s strengths and weaknesses. 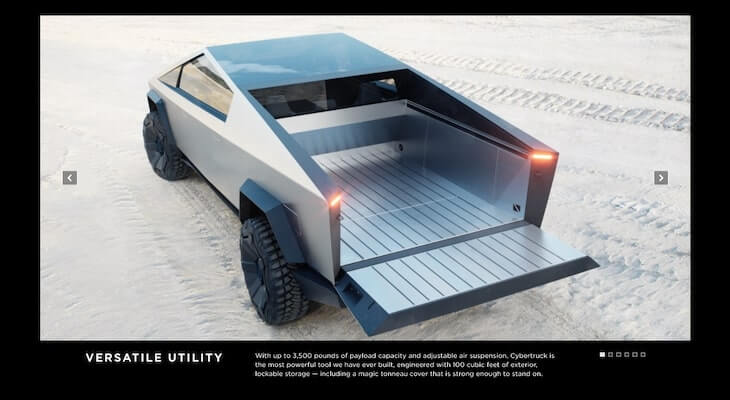 Both the Lighting and the Cybertruck are built to be durable, but they’ve taken different approaches to get there.

The Lightning is made with lightweight aluminum panels, which gives it a solid exterior without adding too much drag. On the outside, it looks very similar to the rest of Ford’s F-series line, except for the addition of LED headlights and taillights.

Meanwhile, the Tesla Cybertruck is made with a proprietary stainless steel alloy that gives it a sleek, futuristic look. But it isn’t just for show: Elon Musk claims it’s bullet-resistant and strong enough to be used in space.

The enclosed truck bed opens up to reveal a ramp and 6.5 feet of cargo space — 1 foot more than the Lightning, which offers 5.5 feet of space.

The two vehicles are nearly identical in length, with the Lightning measuring 232.7 inches — a full inch longer than the Cybertruck’s 231.7-inch body. 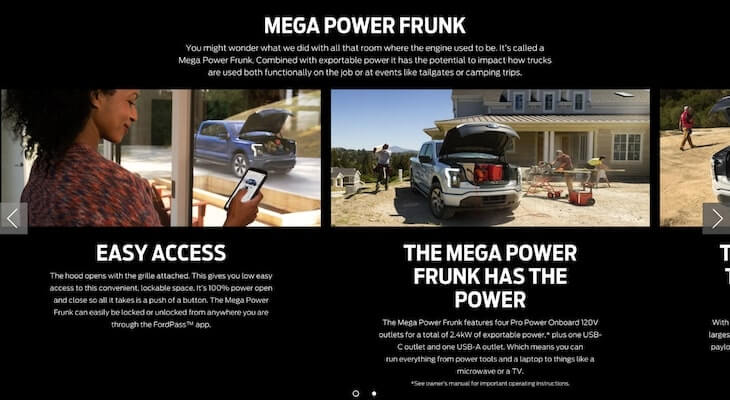 The Lightning also has a 14.1-cubic-foot “frunk,” or a front trunk, giving you additional storage capacity where the internal combustion engine would be.

The interior of the Cybertruck has the same futuristic aesthetic, with room for six people — the center console doubles as a seat — and a “yoke style” steering wheel.

As with most Tesla models, there are minimal buttons. Instead, most of the controls are incorporated into the dashboard touchscreen.

The Ford F-150 Lightning is only a five-seater, but the center console can be turned into a workstation — perfect for those who plan to use it as a work vehicle. 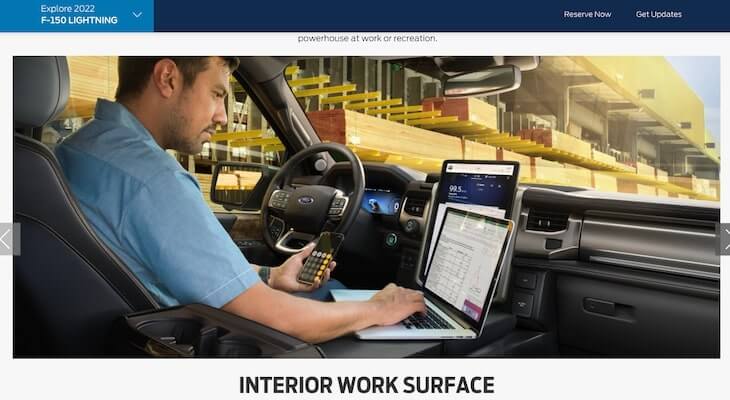 You’ll also get a massive 15.5-inch touchscreen, as well as a more traditional steering wheel and dashboard controls.

The tri-motor version of the Cybertruck is the most powerful of the bunch, with the ability to tow up to 14,000 pounds and reach 60 mph in 2.9 seconds.

The most powerful Lightning — the extended range version — can tow a maximum of 10,000 pounds. Other performance specs haven’t yet been released.

The Cybertruck comes standard with the Autopilot autonomous driving system, which has features such as adaptive cruise control and blind-spot monitoring. For $10,000, you can upgrade to Tesla’s Full Self-Driving system for more advanced features.

Ford’s BlueCruise system is newer, and will be available in both the F-150 Lighting and the Mustang Mach-E.

It offers similar features as Tesla’s Autopilot, such as steering and acceleration control. You can even take your hands off the wheel in some driving conditions — but it has an infrared camera to make sure that someone’s always in the driver’s seat.

Neither automaker has announced the battery pack capacity of each of these trucks. But when it comes to range, the standard Lightning can drive 230 miles on a single charge, while the extended range model can take you as far as 300 miles on a full charge.

The Tesla has faster charging speeds, reaching up to 250 kW on the Supercharger network, while the Lightning only gets up to 150 kW on DC power.

That said, the Lighting is designed for providing power in addition to consuming it: It has 11 onboard outlets that can provide 9.6 kW of power to tools and other equipment

It can even be used to power your home in an emergency for up to 10 days with the Ford Intelligent Backup Power system.

Which Electric Truck Is Right for You?

But if you want a truck with maximum range and access to high-tech features — such as Tesla Autopilot — then the Cybertruck may be a better fit.

If the Cybertruck is out of your price range, you can look for a Tesla lease deal, which may be a more affordable way to drive home with a Cybertruck.

Keep in mind that the Ford F-150 Lightning may be eligible for an electric car tax credit of up to $7,500, while the Cybertruck isn’t. (Tesla has already maxed out its quota.)

You can use this tool to compare electric vehicles in your area, or find out more about 2022 electric pickup trucks, such as the Rivian R1T and the Hummer EV.