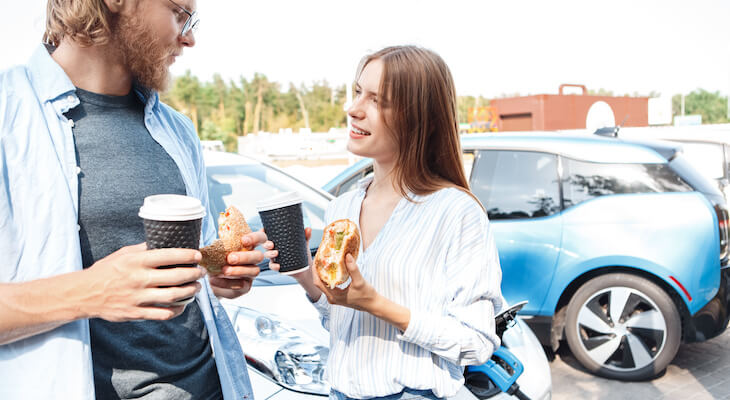 If you’re considering an electric vehicle for your new car, navigating the many different types of electric cars available on the market today can be confusing. A hybrid car, or hybrid-electric vehicle, is a car that uses both electricity and a gas-powered, internal combustion engine as fuel.

While all-electric vehicles continue to grow more popular, hybrid cars are still widely popular. Nearly 450,000 hybrid vehicles were sold in 2020. Cars with a hybrid electric motor offer terrific fuel economy and far lower emissions than traditional gas-powered vehicles, and are proof that the days of the gasoline engine are rapidly coming to a close.

Contrary to popular belief, the hybrid technology in automotive engineering has been around for over a century, although historians have had difficulty pinning down just when the first one was developed. It is known that Ferdinand Porsche, founder of the venerated sports car company, showcased a car powered by both electric and gas engines as early as 1898.

Read on to learn a bit more about the types of hybrid cars available and some details on how hybrid cars work. The Toyota Prius recaptures kinetic energy and returns it to its onboard battery for later use in a process known as regenerative braking.

​Plug-in hybrid vehicles, also known as PHEVs, combine a gasoline engine with a battery pack. Like full hybrid cars, drivers can alternate on which source of fuel they use depending on factors like the length of their trip, driving area (city or highway), and amount of battery charge they have available.

PHEVs must be plugged into an electrical source for their battery to be recharged. Purchase of a plug-in vehicle requires access to a charging station. The best-selling plug-in hybrid in the United States as of 2020 is the Jeep Wrangler 4xe.

Benefits of Driving a Hybrid Car Driving a hybrid car has many benefits. From doing a solid for the environment, to putting extra cash in your wallet, there are many reasons why drivers increasingly prefer them over traditional gas-powered vehicles.

Given that their fuel consumption is considerably lower, it’s no surprise that traditional gas powered vehicles cannot compete with hybrids in terms of fuel economy. According to the U.S. Department of Energy, a 2022 Toyota Prius hybrid vehicle offers 56 mpg combined. A gas powered Honda Accord offers just 33 MPG.

According to a recent report by The New York Times, hybrid and plug-in hybrid vehicles are roughly the same price as traditional, gas-powered cars, but have just half of the emissions.

Transportation is the largest source of harmful greenhouse emissions in the United States, and scientists across the world have repeatedly stated that the widespread adaptation of electric vehicles will be one of the best tools to fight harmful greenhouse gas emissions.

A hybrid vehicle can cost as much as 20% more than similar cars powered by a conventional gasoline engine. But thanks to a wide variety of state and federal tax incentive programs for hybrid car purchases, choosing as hybrid as your new car can ultimately offer significant savings over choosing a gas-powered vehicle.

The federal government offers an income tax credit of up to $7,500 for all plug-in hybrids purchased new in or after 2010. The amount of the credit varies based on the amount the car utilizes its on-board battery. Drivers who purchase a pre-owned hybrid vehicle do not qualify for this credit.

The U.S. Department of Energy hosts a database that outlines state incentive programs for the purchase of an electric or hybrid vehicle.

What to Consider Before Buying a Hybrid Car

There are several things that are important to think about when considering a hybrid car. In terms of performance, hybrid cars tend to lack the instant acceleration and top speeds of their all-electric and gas-powered counterparts.

Nearly all hybrid cars are engineered for long distance travel at low speeds, so if you’re looking for a vehicle that’s better suited for the passing lane, a hybrid car might not be for you.

No matter what type of new car you’re considering, your driving habits should always be top of mind before you begin your research or visit a dealership. If you tend to drive only short distances, a hybrid vehicle might not be your best option.

If you drive a lot for work, or frequently visit relatives that live far away, a hybrid car is a viable option to save on fuel costs. What remains true is that whether you purchase a new hybrid vehicle or a pre-owned one, the fuel savings is significant no matter how far or often you travel.