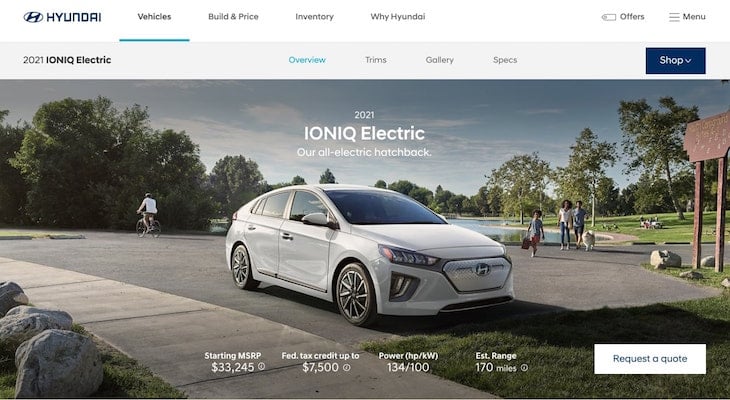 If you’re looking for an affordable new car with a generous battery pack warranty and a complimentary maintenance policy, then the Hyundai IONIQ Electric hatchback might be one of the best cars for the money.

We won’t sugarcoat it: The Hyundai IONIQ Electric’s range is low compared to some of its competitors, and it accelerates from 0 to 60 mph in a sluggish 8.4 seconds.

But with a starting price of $33,245 — and a potential $7,500 electric car tax credit — this budget-friendly vehicle has several surprises in store, including plenty of cargo space, a state-of-the-art infotainment system, and DC fast charging capabilities.

Here’s everything you need to know about the Hyundai IONIQ Electric to help you make a decision, including how the IONIQ Electric range compares to other models.

The Hyundai IONIQ Electric is one of several cars in the IONIQ line, which also includes a hybrid and a plug-in hybrid version. This makes it easy to compare how much money you can expect to save by buying one type of electric car over another.

We’ll get to those other options in a minute, but first, let’s go over the specs and pricing levels for the all-electric IONIQ. 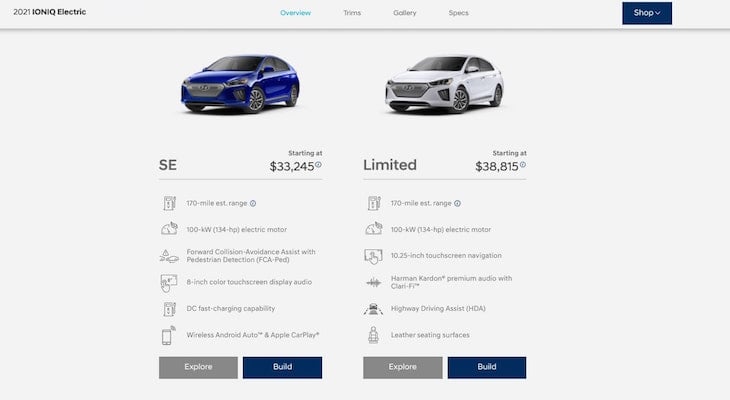 The Hyundai IONIQ Electric comes in two different trim levels: SE and Limited. The SE trim has a Manufacturer’s Suggested Retail Price (MSRP) of $33,245, while the Limited trim starts at $38,815.

Both trims have the same EPA-estimated range — 170 miles on a single charge — and MPGe (miles per gallon gasoline-equivalent) of 133 combined city/highway driving.

Likewise, they both have a 38.3 kilowatt-hour (kWh) battery capacity and come with DC fast charging capabilities and an SAE combo port.

The main external differences are features such as LED headlights and a tilt-and-slide sunroof, which both come standard with the more expensive trim level.

Moving inside, you’ll find several other differences between the two trims. The SE has an 8-inch infotainment system, while the Limited has a 10.25-inch touchscreen, LED interior illumination, and ambient interior lighting.

The Limited trim comes with blind-spot monitoring and collision warning, and highway driving assist for additional safety and convenience.

The IONIQ has an overall safety rating of “Good” according to the Insurance Institute of Highway Safety (IIHS), which applies to model years 2017-2021. 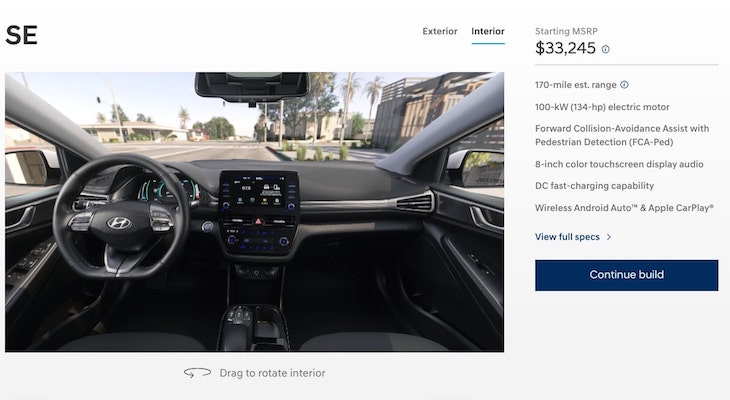 It’s also worth noting that Hyundai has designed the IONIQ using eco-friendly materials, so in addition to lowering your tailpipe emissions, you can take comfort — both literally and figuratively — in a stylish interior made with bio-fabrics and recycled plastic.

This includes heated front seats, adjustable head restraints, a leather-wrapped steering wheel, and more. The rear seats have a center armrest with cupholders, and can fold down in a 60/40 split to provide more cargo space.

Electric car manufacturers are required to offer an 8-year/100,000-mile warranty on the electric motor and battery pack for all electric vehicles sold in the U.S.

Plus, Hyundai promises complimentary maintenance — including tire rotations and air filter changes — for up to 3 years or 36,000 miles.

Since electric cars require less maintenance than conventional cars, this offer may be less generous than it seems. Still, it may save you money in the long run, especially if you choose one of the IONIQ’s hybrid models, which do require oil changes.

How the Hyundai IONIQ Electric Compares

Before we go any further, it’s time to introduce the other players in the IONIQ electric range: the hybrid and the plug-in hybrid.

Some drivers will be better off with the IONIQ hybrid, because it offers more driving range and a lower sticker price. It also has a tiny bit more cargo space — 26.5 cubic feet compared to 23 cubic feet in the electric model — due to its smaller battery pack.

The tradeoff is higher fuel and maintenance costs in the long run, and reduced eligibility for the federal income tax credit. The IONIQ Electric is eligible for the full $7,500 credit, while the plug-in hybrid is only eligible for a $4,543 credit and the conventional hybrid isn’t eligible at all.

Here’s how the three versions of the IONIQ compare:

As you can see, the standard hybrid is cheaper than the all-electric version, but you can expect to pay $350 more in fuel costs every year. (For the electric version, the EPA uses the projected price of electricity to estimate fuel costs.)

The plug-in hybrid is somewhere in the middle, providing some fuel cost savings if you plug it in and charge it regularly, but still giving you a gas tank to fall back on if you go on a longer trip and don’t have access to a charging station.

There’s one more version of the IONIQ that will be coming out in fall 2021, and that’s the IONIQ 5. This EV is a crossover SUV that’s larger and more powerful than any of the existing IONIQ models.

While the MSRP hasn’t yet been announced, it’s likely to be in the $45,000 range, in line with other crossover SUVs like the Volkswagen ID.4 and the Kia Niro.

Where to Buy the Hyundai IONIQ Electric

Hyundai won’t be coming out with a new version of the IONIQ EV for the 2022 model year, so time is running out to buy a new one straight out of the factory.

Clearly, Hyundai is shifting gears to focus on the IONIQ 5 and other newer models. That said, 2022 versions of the hybrid and plug-in hybrid will still be available in some states, including California, Colorado, Oregon, Washington, and several East Coast states.

You can also buy a used electric car by searching for available options near you. You’ll find used 2019 IONIQ EVs starting at around $20,000 in some areas.

Who is the 2021 IONIQ Electric Best For? 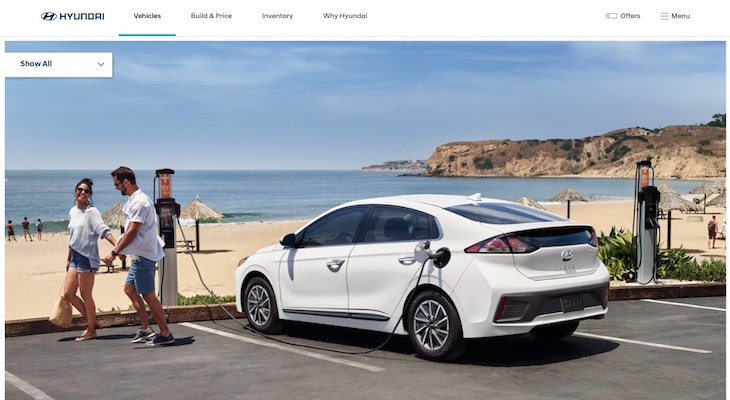 As we’ve seen, the Hyundai IONIQ Electric isn’t a leader in electric car range, so it may not be a great fit for drivers who spend a lot of time on the road.

It’s best for everyday commuters who stick within 170 miles (round-trip) of home, and can charge the battery overnight using a home charger.

Still, the fact that the IONIQ comes with DC fast charging capabilities built-in gives it an advantage over some of its competitors, such as the Chevrolet Bolt EV and the Nissan LEAF, both of which charge extra for a fast-charging port.

That means you can easily charge it at a roadside charging station if you go on a long trip, with charging speeds of 100 kW that can add 80% capacity in 54 minutes.

Other perks include a relatively spacious interior made with eco-friendly materials such as sugarcane and volcanic stone and 3 years of complimentary maintenance when you purchase a new Hyundai from a dealership.

If you don’t mind its slow acceleration and limited range, the IONIQ Electric has enough unique features to make it worth a test drive!