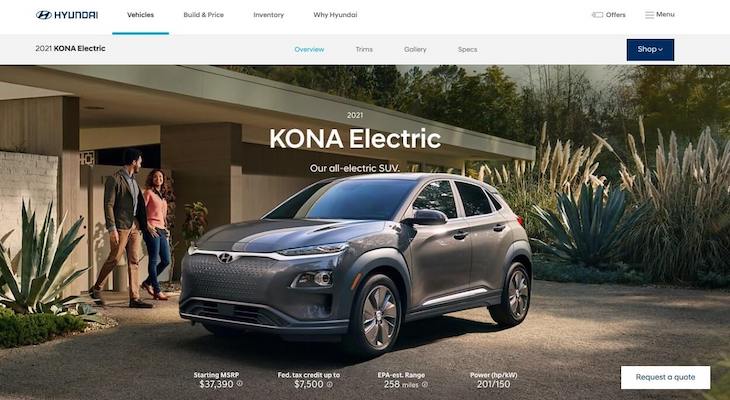 The 2021 Hyundai Kona EV is the all-electric version of the conventional Kona, giving drivers most of the features of the gas-powered model with a lower carbon footprint.

Like many of Hyundai’s crossover SUVs, the Kona is named after a popular travel spot — in this case, a location on the island of Hawai’i. With its comfy styling and all-electric range, the Kona EV is a good choice for city and suburban drivers alike.

But how does it compare on price and other specs? Read our Hyundai Kona Electric review to find out how its electric range, fuel economy, trim options, and other key features compare to similar EVs.

The Kona EV was launched in 2018, about a year behind its gas-powered counterpart. While sales of the conventional Kona are still higher, the electric version is gaining in popularity, with over 85,000 units sold in 2020.

Since it’s only been in production for a few years, even a used Kona EV will have the same range and fuel economy as the 2021 version, earning it a spot on our list of the most affordable electric cars and the top 10 eco-friendly cars of 2021.

Our Hyundai Kona EV review has everything you need to know about the 2021 model, including where to buy it, how to charge it, and what the manufacturer’s warranty covers. 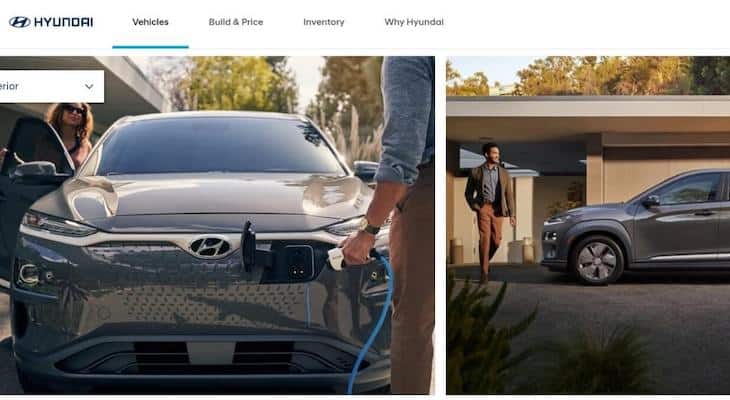 The Kona EV’s all-electric range is pretty impressive for a crossover SUV. It has a 64 kilowatt-hour (kWh) battery that gets 258 miles of range on a single charge — just one mile less than the Chevrolet Bolt EV, and about the same as the Volkswagen ID.3.

While that’s less than some luxury EVs like the Tesla Model 3, it’s more than most other EVs on the market, including the Nissan LEAF, which only gets 226 miles.

According to Hyundai’s estimates, it takes 7.5 hours to charge the battery using a home charger and 54 minutes to reach 80% at a DC fast-charging station. The EV also charges its battery using regenerative braking.

As for its fuel economy, the U.S. Department of Energy gives it a combined city/highway rating of 120 MPGe (miles per gallon of gasoline-equivalent), four times as much as the 2021 Hyundai Kona Front-Wheel Drive (FWD), which only gets 30 miles per gallon.

Because it’s so fuel efficient, drivers can expect to pay $550 in fuel costs every year for the all-electric Kona vs. $1,600 for the conventional Kona.

The Kona EV has a 201-horsepower electric motor and it can accelerate from 0 to 60 in less than 6.5 seconds. By most accounts, it’s a smooth ride that performs well in a wide range of driving conditions. Most Hyundai Kona EV reviews give it high points for driver comfort, with heated front seats and a leather steering wheel included on the standard SEL trim. The backseat is slightly smaller, with 33.4 inches of legroom vs. 41.5 in the front seat.

Still, there’s plenty of room for five people, as well as 19.2 cubic feet of cargo space, making for a total of 45.8 cubic feet of space if you fold down the rear seats.

Drivers also get a six-speaker audio system and a 7-inch touchscreen display, which can be upgraded to 10.3 inches, depending on the trim. The infotainment system is compatible with Android Auto and Apple CarPlay via Bluetooth.

Standard features include lane-keeping assistance, automatic emergency braking, and a rearview monitor with parking guidance. Other safety features include blind spot monitoring and forward collision warning, but you’ll need to upgrade to the Limited trim for adaptive cruise control and pedestrian detection.

The Kona has a safety rating of “Superior” from the Insurance Institute of Highway Safety (IIHS), although it’s worth noting that crash tests were performed on the conventional model and not the electric version specifically. 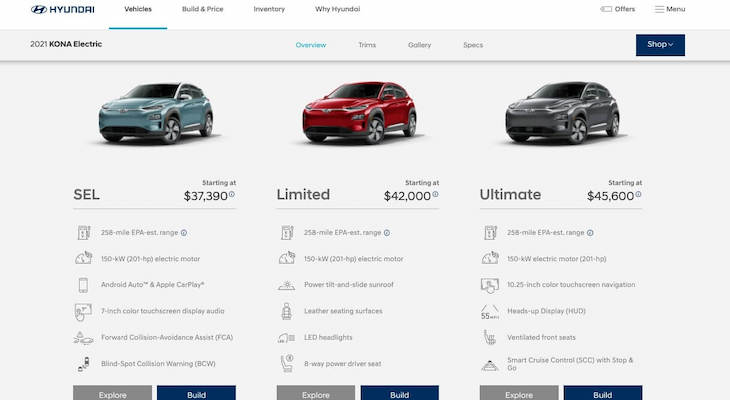 All three trims have the same equipment under the hood: a single-speed transmission and a 64-kWh battery with a range of 258 miles.

The Limited trim comes with a few extra features, including a sunroof, leather seating, and LED headlights. The Ultimate trim adds on two additional speakers, a 10.3-inch touchscreen, and the option to connect multiple devices via Bluetooth.

Since the more expensive options don’t add on any range, they may not be worth it for most drivers. The Kona EV is already pricier than the conventional Kona, which has a manufacturer’s suggested retail price (MSRP) of $20,500.

Still, the Kona EV is eligible for the full $7,500 electric car tax credit, which can offset the purchase price considerably.

It also has a longer warranty than many other EVs, with a five-year/60,000-mile basic warranty, and a 10-year/100,000-mile warranty on the powertrain and battery.

How the Hyundai Kona EV Compares

If you’re trying to decide between an electric vs. gas car, then there’s no comparison: The conventional Kona wins on sticker price, but the Kona EV wins on lifetime ownership costs and fuel efficiency.

The U.S. Department of Energy estimates that you can expect to save over “$6,000 in fuel costs over 5 years compared to the average new vehicle.”

The Kona FWD can get you 396 miles on a full tank, more than the EV’s range of 258 miles, but it only gets 30 mpg. The All-Wheel Drive (AWD) version fares even worse, getting only 27 mpg.

Here’s how the Kona EV compares to its gas-powered counterparts:

If you’re choosing between the Kona EV and another crossover, then you’ll have a few more options to consider. Its close cousin is the Kia Niro EV, which is slightly roomier, but is a little less fuel efficient and has less range.

One major difference is that the Niro is available as a plug-in hybrid (PHEV), while the Kona Electric isn’t. For drivers who want to drive a fuel-efficient car but still have a gas engine to fall back on, then choosing a hybrid over an all-electric car may be a better option.

You might also want to consider the Volkswagen ID.4, which is VW’s first crossover SUV and is similar in pricing and range to the Kona.

Here’s how the Kona and the Niro compare:

The 2021 Hyundai Kona EV is currently available at dealerships in California and in nine other states that adhere to California’s ZEV (zero-emission vehicle) standards. If you live in one of these states, then you may be eligible for state-level rebates and incentives in addition to the federal tax credit.

You can also look for a Kona on the used car market, which may be a more affordable way to bring an EV home. You can use this search tool to compare electric car prices near you, including used models. 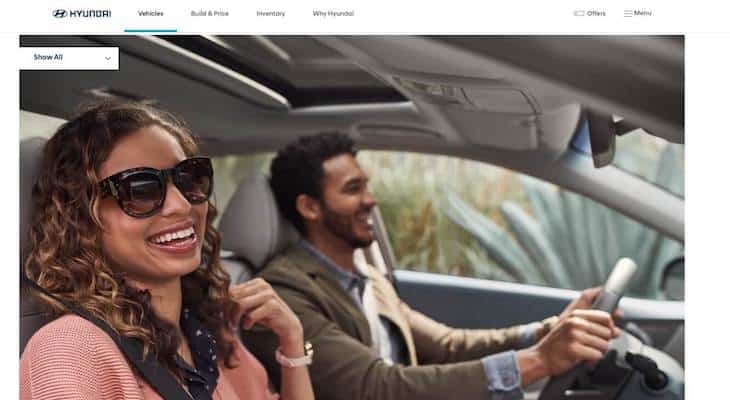 There’s no one-size-fits-all EV, so you’ll have to do some thinking about your driving habits and your lifestyle before buying a new car.

The Kona EV is an all-electric vehicle that needs to be plugged in to be charged, so it may not be ideal for long-distance trips and cross-country driving.

On the other hand, its driving range and fuel efficiency makes it a good choice for local commuters who do a combination of city and highway driving. Its crossover design makes it spacious enough for families, but its rear legroom may be a better fit for younger children than for teenagers.

Whatever your lifestyle, there’s bound to be an EV or hybrid that’s right for you. For more options, check out our list of electric SUVs and family-friendly vehicles.