Rivian vs. Tesla: The Newcomer Faces the Trailblazer 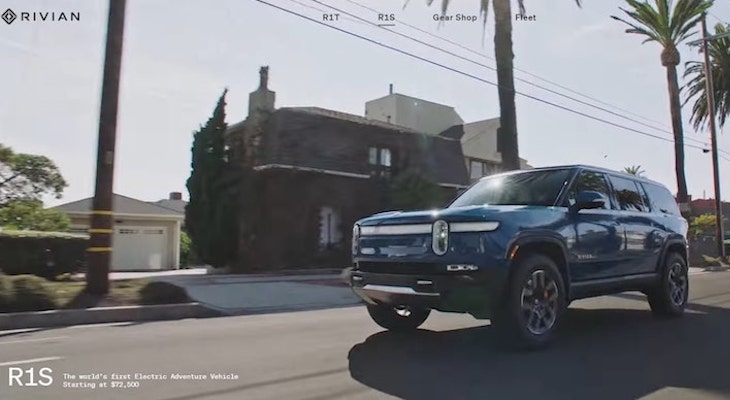 The electric vehicle market has seen wild expansion lately, and it continues with the Rivian lineup of off-road-ready SUVs and pickup trucks. These eco-friendly off-roaders are ready to tear up the unbeaten path without using a drop of fuel.

How does this relatively new EV automaker stack up against the king of the electric auto industry, Elon Musk’s Tesla? We ran through a Rivian vs. Tesla head-to-head competition to find out.

EVs are traditionally known for being more unique-looking than your average vehicle. While the Rivian lineup and the Tesla Model X are fairly simple compared to some EVs, the Tesla Cybertruck is about as unique as they come. The Rivian R1S rips a page directly from the Ford Bronco, with its upright and rugged-looking body with 14.6 inches of ground clearance and knobby tires, showing its focus on off-road prowess. While its profile looks relatively normal, its front end boasts a unique bar-style LED headlight and slick oval openings in the grille. The Model X is unique in its own right with its more bubble-style design. While it certainly can handle some light off-road driving, it’s clear from its more car-like design and a lower ride height that it’s best-suited for highway driving. The Rivian R1T wears its relationship to the R1S on its sleeve, as it features the same upright design, unique lighting, and eye-catching grille design. The only difference is it has a bed in the place of the rear third of the R1S. The Tesla Cybertruck isn’t in production yet, and Tesla has only shown it in concept form. In this preliminary design, the Cybertruck has a wild wedge-like design that looks nothing like the rest of the Tesla lineup. There is still plenty of doubt if the Cybertruck will ever make it to market and, if so, if it will look like the concept. The jury is still out.

Like their exteriors, electric car interiors gained a bit of a reputation of looking forward into the future with their designs. Overall, Tesla and Rivian have opted for more toned-down and clean looks with vegan leather. 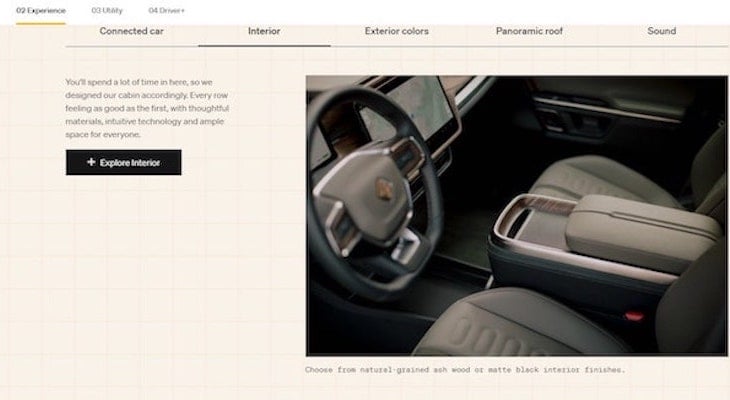 The interior of the Rivian R1S includes a relatively featureless dash, giving it a simple and clean look. This is broken up by a 15.6-inch touchscreen in the center that controls everything from the navigation to the climate control system. It also features a digital gauge cluster behind its steering wheel. Plus, there is a third row that can accommodate smaller children. The Model X also has a relatively featureless cabin and dash that’s broken up by a 17-inch touchscreen that replaces all the buttons and knobs most cars have. The big standouts in the Model X is its advanced gaming system for backseat riders that Tesla claims is as powerful as any modern gaming system and its yoke-style steering wheel.

Neither the Rivian R1S nor the Tesla Model X offers Apple CarPlay or Android Auto. The Model X also has an optional third row that converts it into a six- or seven-seat crossover. Like the exterior, the R1T pickup’s interior is effectively a carbon copy of the R1S, except it has only second-row seating. The electric pickup truck’s dash, infotainment touchscreen, and digital gauge cluster are all the same as you’d find on the R1S.

Tesla has yet to unveil images of the Cybertruck’s cabin, so it’s hard to say what it’ll look like. That said, it’ll likely share some similarities with the Model X, including a 15-inch touchscreen, digital gauge cluster, and a yoke-style steering wheel.

Electric vehicles have come a long way in the powertrain department. They’ve gone from efficiency-only vehicles to mixing in some legit performance credentials. Rivian and Tesla live up to this progression.

The Rivian R1S started with its base powertrain that includes dual-motor all-wheel drive (AWD) with a pair of electric motors combining for over 600 horsepower and 600 pound-feet of torque. This translates to sports-car-like acceleration. The optional quad-motor AWD system includes four electric motors combining for 835 horsepower and 908 pound-feet of torque, turning the straight-line acceleration of the R1S into a supercar-like experience. The Rivian R1S can tow up to 7,700 pounds.

The Model X also comes standard with a dual-motor AWD system, but Tesla doesn’t advertise its output. It offers insanely fast accelerations — even faster than the R1S. The optional tri-motor AWD setup in the Model X Plaid delivers 1,020 horsepower and blistering acceleration that leaves the R1S in its wake. The Model X can tow up to 5,000 pounds.

The Rivian R1T has all the same powertrain options as its R1S SUV sibling. The only difference is its towing capacity is far higher at up to 11,100 pounds.

Tesla hasn’t revealed any official information on the Cybertruck’s powertrain, but it claims a 0-to-60 time as low as 2.9 seconds and up to a 14,000-pound towing capacity, giving it a clear advantage over the Rivian.

Efficiency remains one of the highest priorities for EV buyers. Tesla has been a leader in this space for years, but can the startup Rivian catch up?

The Model X is a clear leader in efficiency with up to 348 miles of driving range and up to 102 MPGe combined. This translates to $650 to $700 in annual charging costs.

So far, the EPA has tested only one Rivian R1S model — one with an add-on large battery pack option. It travels up to 316 miles on a single charge and delivers a sub-par 69 MPGe combined. While this isn’t ideal, some drivers may be willing to trade efficiency for a higher ride height and off-road readiness.

The EPA estimates it’ll cost $950 per year for the average driver to keep the R1S charged. Clearly, the Model X is superior for long-range driving, saving you hundreds of dollars per year in charging costs.

Tesla estimates the Cybertruck will deliver 500 or more miles on a single charge, but the EPA has yet to officially release numbers on it.

Like the R1S, the EPA has tested only one Rivian R1T model with the large battery pack option. It travels up to 314 miles on a charge and delivers an unimpressive 70 MPGe combined.

According to the EPA, the R1T will cost the average driver $950 per year to charge.

While these aren’t the cheapest electric cars, you’ll always save on fuel and repair costs when going electric. Here’s how much these cars will cost you.

There is no pricing information on the Cybertruck, but we know it won’t qualify for the $7,500 tax credit.

Who Wins the Rivian vs. Tesla Battle? 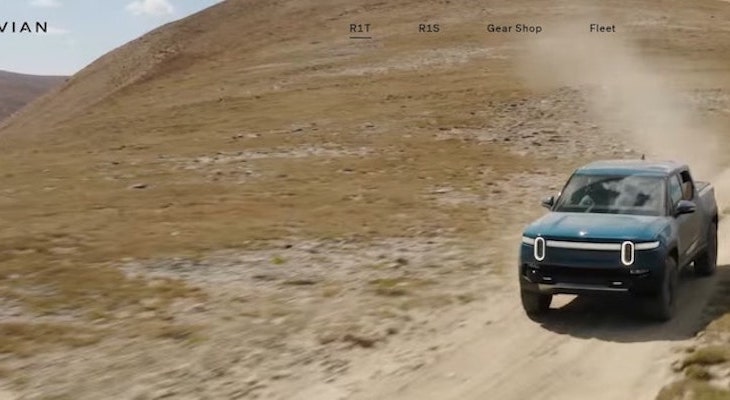 When choosing between a Rivian and Tesla, your lifestyle will play a big role.

Rivian models are distinctly set up for off-roading with their high ride heights, knobby tires, and upright designs. However, this all negatively impacts efficiency. Those looking to go on weekend adventures in the desert and mountains will love the Rivian R1S or R1T.

The Model X or forthcoming Cybertruck will be your best bet if you’re a commuter looking for maximum range. While Teslas are among the most expensive EVs, there is a robust used Tesla market where you can save cash.

No matter which model you choose, Compare.com can help you find the perfect used EV with a powerful search tool. We can further help in your decision-making process with a comprehensive library of EV guides.