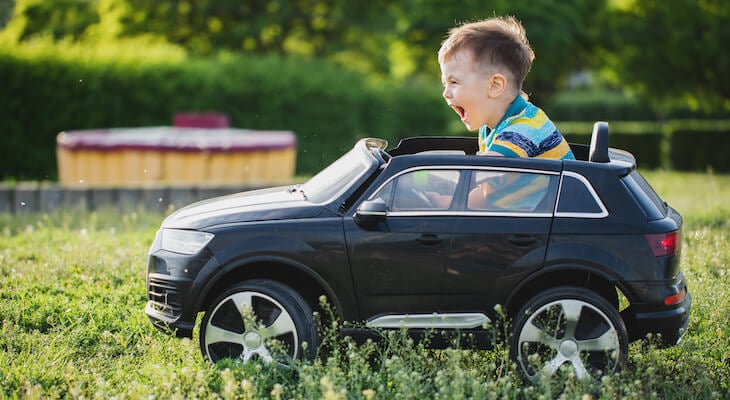 It might seem like cars can be referred to as small, compact, or midsize without any rhyme or reason, but in fact, there are clear guidelines that automakers use when sorting cars by class.

The Environmental Protection Agency (EPA) distinguishes vehicle size classes by the amount of passenger and cargo volume a car can hold in cubic feet.

Other agencies, such as the National Highway Traffic Safety Administration (NHTSA) and the Insurance Institute for Highway Safety (IIHS) may use curb weight instead.

If you’re struggling to tell the difference between a crossover SUV or a hatchback, our list of the best small electric cars of 2022 may help you out.

Why Choose a Small Electric Car?

For some drivers, a small electric car is out of the question. If you have a large family or need a lot of cargo space, then you may want to consider an electric SUV or minivan, or a pickup truck like the Ford F-150 Lightning or Tesla Cybertruck.

But for those who can make do with a smaller vehicle, there are plenty of benefits, from a lower purchase price to faster charging times.

It’s true that small EVs may have smaller battery packs, which can limit range, but this also means that they weigh less and use less power. One study found that “Certified and real-world energy consumption of electric vehicles increase by 60% and 40%, respectively, with each doubling of vehicle mass.”

An electric motor produces fewer emissions than an internal combustion engine, while still providing plenty of horsepower to get you where you need to go.

Before we get into our list of the best electric cars, let’s stop for a quick refresher on vehicle types. Since these categories refer more to body type than vehicle size, they can give you a good idea of the car’s design, such as whether it has a trunk, and how many passengers it can fit comfortably.

Still, since there can be some overlap between categories, it’s always a good idea to double-check the interior dimensions of your prospective EV before buying it.

A coupe usually refers to a car with two doors and a trunk, with a sleek design similar to a sportscar. The Ford Mustang is a classic example, although it’s worth noting that the new Ford Mustang Mach-E is much larger and classed as a crossover SUV.

A sedan is a four-door car that has room for five passengers and a separate trunk. This vehicle type comes in all sizes, from subcompacts to full-size sedans. The Tesla Model 3 is a great example of a midsize electric sedan.

Hatchbacks are similar to sedans, except they have a rear door, or “hatch,” that lifts up, instead of a traditional trunk. This makes for a larger cargo area, since the back seats can be flipped down to provide more cargo space. Some of the most popular electric cars, such as the Nissan LEAF and Toyota Prius, are five-door hatchbacks.

Finally, crossover SUVs like the Kia Niro are based on the design of a passenger car, rather than an off-road SUV like the Jeep. There’s no standard definition of which cars fall into this category, but crossover and compact SUVs are becoming an increasingly big part of the electric vehicle market in the U.S.

The Best Small Electric Cars of 2022

With that in mind, let’s take a look at some of the best new cars based on size. 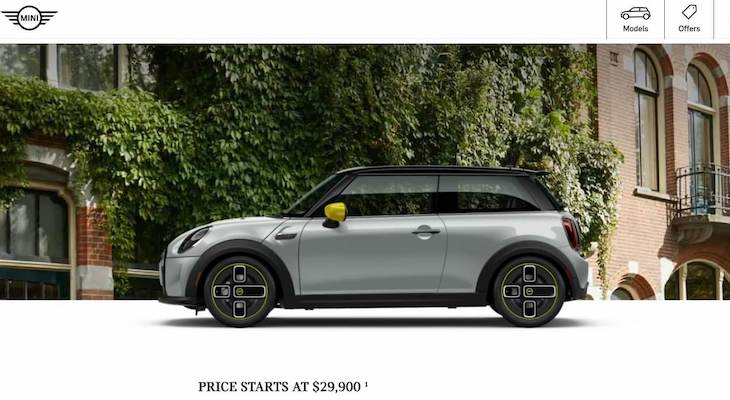 The Mini Cooper Electric has one of the most unique designs on our list — it’s a bit of a cross between a coupe and a hatchback. Like a traditional coupe, it has two doors and seats four passengers, but it has a hatchback instead of a conventional trunk.

The Mini Cooper has a top speed of 93 mph, has 114 miles of range on a fully charged battery, and gets 119 miles per gallon of gasoline-equivalent (MPGe).

The Mini Electric is a great city car for drivers who want a compact design that can fit into tight parking spots, but it doesn’t offer much in the way of cargo space — only 8.7 cubic feet. The back seat is also a tight fit, with only 30.8 inches of legroom. 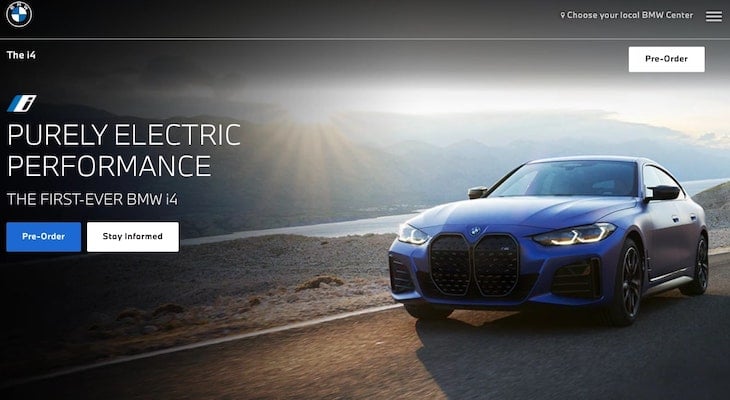 The BMW i4 is technically a sedan, although the automaker describes it as a “four-door coupe.” At $56,395, this electric car has the highest price tag on our list, putting it in the company of other luxury EVs like the Tesla Model S or the Porsche Taycan.

The i4 offers a driving range of 300 miles, and can be charged in nine hours using the BMW Wallbox home charger or in 40 minutes at DC fast charging stations.

The interior offers upscale styling, including a 14.9-inch touchscreen and a 12.3-inch digital display that supports the iDrive 8 voice control navigation system. The Chevy Bolt EUV is the latest version of Chevrolet’s popular electric hatchback. This model is an “electric utility vehicle” that comes with GM’s new Super Cruise technology, which offers hands-free driving on some highways.

The EUV is 6 inches longer than other models and has 3 extra inches of legroom in the backseat, but it doesn’t add on any extra cargo space.

Still, with an MSRP of $33,000, the base model offers plenty of features for the price, including a driving range of 247 miles and a convenient one-pedal driving mode.

The Hyundai IONIQ comes in several different versions, including an all-electric model, a hybrid, and a plug-in hybrid, each with slightly different dimensions. The electric and plug-in hybrids have a bit less cargo space due to their larger battery pack — 23 cubic feet vs. 26.5 in the hybrid. 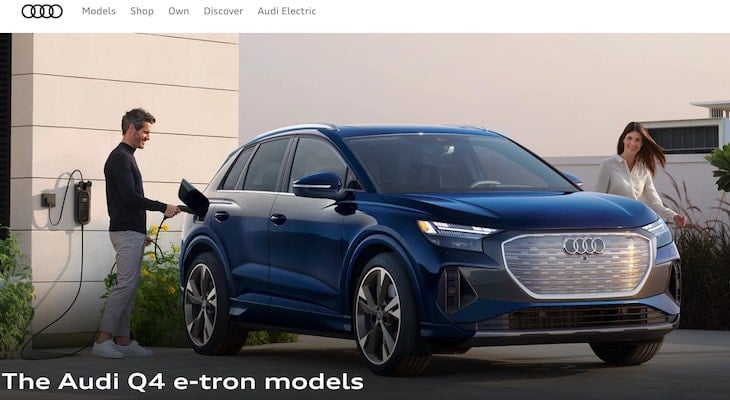 The Audi e-tron comes in several different versions, including the Q5 Plug-In Hybrid and the Audi e-tron Sportback. The 2022 Audi Q4 e-tron will be the most affordable version, with an estimated starting price of $45,000.

This compact SUV has 18 cubic feet of cargo space, which increases to 52.6 with the seats folded down. It has a battery capacity of 77 kilowatt-hours, giving you up to 250 miles of range on a single charge.

The Audi Q4 e-tron has an infotainment screen and a digital display (both just over 10 inches), as well as adaptable cruise control and other driver assistance features. 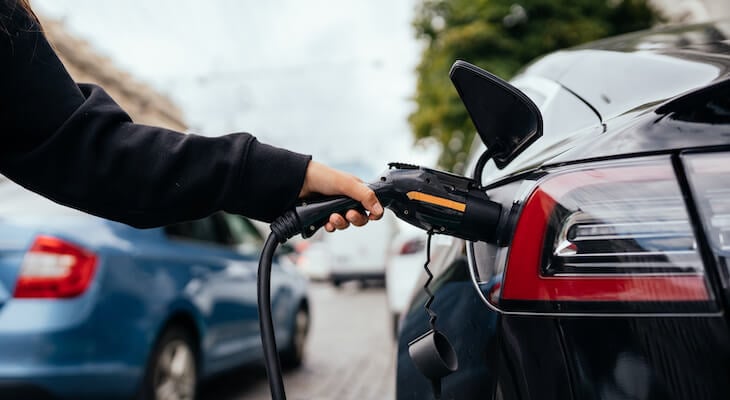 You can use this tool to see which electric cars are available in your area, and compare them based on pricing, practicality, and ownership costs.