Home Electric Cars Guides Tesla Charging Stations in Texas: Where to Find Them

Tesla Charging Stations in Texas: Where to Find Them 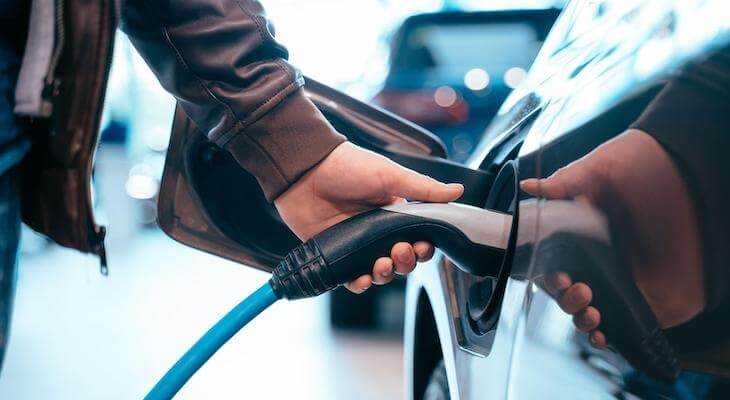 Tesla has been at the forefront of electric vehicle sales because of its increasing battery ranges and growing network of branded chargers. However, other charger networks have also become available, and one even offers Tesla-compatible charging.

If you live in Texas or are traveling through the Lone Star State in your Tesla electric vehicle, there’s no need to fear running out of charge. The many Tesla charging stations in Texas will keep your electric vehicle‘s battery topped off.

There’s no shortage of EV charging stations in the Lone Star State, and finding a Tesla charging station in Texas is relatively simple. However, only three networks in Texas offer Tesla-compatible charging: EVgo, Tesla Supercharger, and Tesla Destination.

Let’s dive into each one. 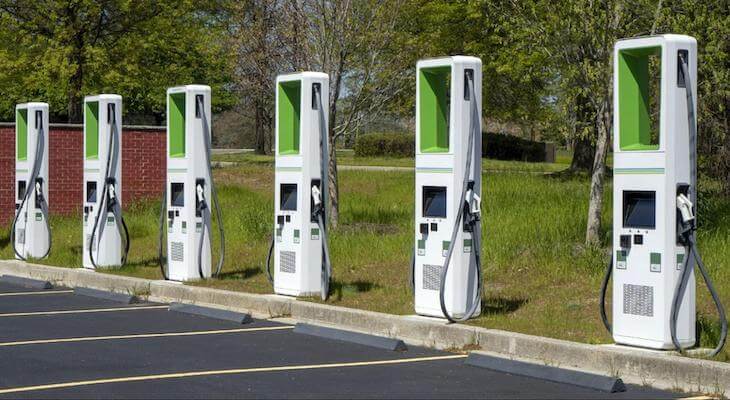 While EVgo is one of the few non-Tesla charging networks offering Tesla connectors, it remains relatively scarce in Texas. You can find these Tesla charging stations in Texas near three large metro areas: the greater Houston, Austin, and Dallas–Fort Worth (DFW) areas.

As of January 2022, there are a total of 20 Tesla-compatible EVgo charging stations in these areas. There are eight in the DFW area, nine in the Houston area, and three in the Austin area.

There are five Tesla chargers in Dallas: one in west Dallas, two in south Dallas, and two in east Dallas. And there are three chargers in the greater Fort Worth area: two in Tarrant, TX, and one in Grapevine, TX.

In the greater Houston area, there are three EVgo chargers in the heart of the city, and the other three are in the suburbs in Katy, Kingwood, and Spring, TX.

EVgo has a few pricing models, including a pay-as-you-go plan and two membership plans for its Tesla charging stations in Texas.

If you’re simply passing through and need a charge or plan to only use the EVgo charger occasionally, you can use the pay-as-you-go plan starting at 30 cents per minute. For an extra $3, you can reserve a charger so you know one will be available when you get there. Not all EVgo charging locations offer reservations, though.

If you plan to charge once a month, you can become an EVgo member for free. You can load money into your account for prepaid charging, and you’ll also get an extra $4.99 as a prepaid credit. Plus, you get a lower starting rate of 27 cents per minute. Reservations are still available for $3.

Finally, if you plan to charge regularly at an EVgo Tesla charging station in Texas, you may want the EVgo Plus membership. This costs $6.99 per month, but reservations are free and charging costs start at just 24 cents per minute — a 20% discount on the base charging rate.

An EVgo charger adds up to 100 miles of charge to a Tesla vehicle for every 30 minutes of charging, so expect to pay at least $7.20 to $9 per 100 miles, depending on your subscription level and the charger’s cost.

Keep in mind that these are all just starting costs. The exact cost may vary based on the location and time of day. The current per-minute rates are available on the EVgo app.

The EVgo Tesla charging stations in Texas are all CHAdeMO + Tesla connections, so they work on Tesla vehicles and Nissan LEAF. Keep in mind, though, you must bring your CHAdeMO-to-Tesla adaptor with you. These chargers recharge at 50 kW, meaning they can charge relatively fast but not as fast as other DC fast chargers.

An EVgo charger adds up to 100 miles of charge to a Tesla vehicle for every 30 minutes of charging.

The most abundant Tesla charging stations in Texas are the Tesla Superchargers, which make up 73 of the current or planned Tesla-compatible chargers in the state.

Tesla planned these units in a way to allow their drivers to make long-distance journeys without worrying about struggling to find a DC fast charger. So, you can find these Tesla charging stations all over the state.

Of course, the bulk of these chargers are located in and around large cities, including Houston, San Antonio, Austin, Dallas, and Fort Worth. However, you will also find them strategically placed just off I-10, I-20, I-30, I-37, and I-35. This placement should allow any Tesla driver to drive across Texas on these interstates and never worry about where they can charge their car.

In addition to chargers on the interstates and in large cities, there are a handful of others in smaller cities, such as Victoria, Waco, Nacogdoches, Henrietta, Amarillo, and more. 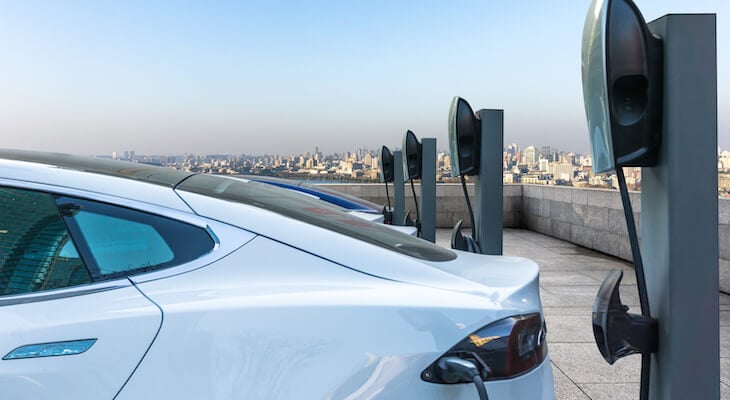 When Tesla initially launched its Supercharger network, it offered some form of free Supercharger use to certain buyers. In fact, some even got free Supercharging for life. If you purchased your Tesla during this program, you’ll charge for free.

Unfortunately, this is the minority of owners these days. The actual cost of recharging your Tesla depends on a wide range of variables. For example, if you only want an 80% charge from a 10% battery level, you can get this in as little as 40 minutes and spend less.

However, if you charge from nearly 0% to 100%, this can take upwards of 70 minutes, as the Supercharger slows its charging rate at 80% to protect the battery. At this level you can expect to pay $11.47 to $22.97 for a full charge, depending on the vehicle and battery capacity.

The other variable is the pricing algorithm. Most Superchargers charge by the kWh. While this varies by location and time of day, you can generally expect to pay about 25 cents per kWh.

Texas, however, is one of the few states where per kWh billing isn’t legal for EV charging stations. So, in Texas, Superchargers charge by the minute in two tiers: a lower cost when you charge at 60 kW or below, and twice the price per minute when you charge above 60 kW.

There is one other fee associated with Tesla Superchargers, the idle fee.

Once your Tesla has completed charging, you could incur up to a $1 idle fee for every minute it occupies a Supercharger space. This fee begins at 50 cents per minute when the Supercharger station reaches 50% capacity. If it reaches 100% capacity, you’ll incur the full $1-per-minute charge. However, if you disconnect and move your vehicle within five minutes of the idle fee starting, Tesla will waive the fee.

When Tesla introduced the Supercharger V3 in 2019, it bumped the charging rate up to 250 kW. This doesn’t mean you’ll always use this setting, but it’s available if your Tesla model supports it. This can give you up to 75 miles of EV range in just five minutes of charging and up to 200 miles in just 15 minutes.

The final Tesla charging stations in Texas are Destination Chargers. These Tesla-compatible chargers are designed for longer-term charging because they’re located in desirable locations where you’d likely plan on spending a few hours or even an entire night. These include restaurants, sporting venues, hotels, resorts, and more.

The Tesla Destination Charger is a wall-box-type charger that a restaurant, hotel, or other popular destination can have installed on their property. Because these aren’t DC fast chargers, they charge your Tesla dramatically slower than the Supercharger and EVgo. However, they’re intended for longer-term charging while enjoying an event, meal, or stay at a hotel.

The biggest benefit to Tesla Destination Chargers is most of them are 100% free, as long as you’re doing business with the establishment where the charger is located.

As we mentioned, the destination chargers aren’t DC fast chargers, so they charge your Tesla at a far slower rate than EVgo or Superchargers.

Tesla Destination Chargers deliver 44 miles of range per hour of charging. If you’re staying overnight at a hotel or spending several hours at a ballgame, this should be plenty of time to get you a full charge for the next leg of your journey.

How to Find a Tesla Charging Station in Texas

Finding a Tesla charging station is simple no matter which brand of charger you opt for.

EVgo has Android and iOS mobile apps that give you all the charging details, such as your current battery level, estimated charging costs, and more. The apps also use GPS to show you the nearest charging stations, and you can even filter them down to Tesla-compatible chargers.

You can also use the app to reserve the charger you want and earn rewards for charging.

If you drive a Tesla, you’ve got a massive touchscreen in the center of the dash that controls nearly everything in the vehicle. You can also use this system to find a Tesla Supercharger or Destination Charger. If you enter your destination in the GPS, it will recommend Supercharger stops along the way to keep you charged up for your entire trip.

Tesla also has Android and iOS apps that let you know your vehicle’s charge status, cost, and if the Supercharger is nearing the idle fee capacity. 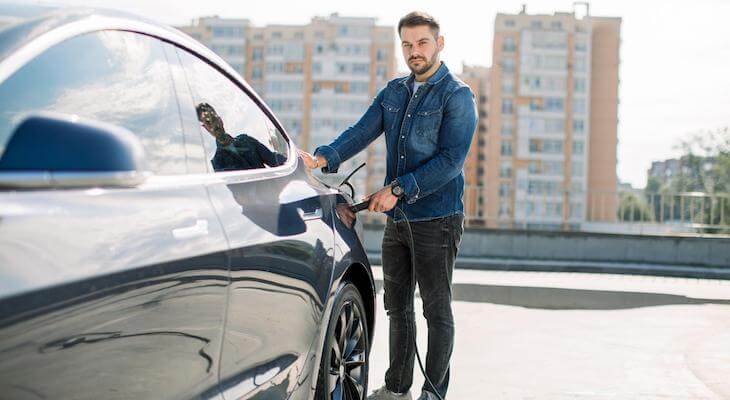 The Tesla Supercharger and Destination Chargers are the best overall option for convenience, as they’re easily located along popular routes, in large cities, and even in some more rural destinations. Plus, the Tesla touchscreen system makes it extremely easy to plan your charging stops on your trip.

However, with a per-100-mile cost that’s significantly higher than a Supercharger and the extra time an EVgo charger takes, a Supercharger should be your first option.

Also keep your destination in mind. If you are near a place where you’ll stay for a few hours, all day, or overnight, it’s worthwhile seeing if there are Tesla Destination Chargers available. These typically free chargers can save you big on your overall trip costs.

If you’re still considering a plug-in car like a Tesla, check out our electric car guides for additional help choosing the right one. Once you’ve narrowed down your options, our used EV search tool can help you find the perfect electric vehicle for you.