Tesla Destination Charger vs. Supercharger: Which to Choose 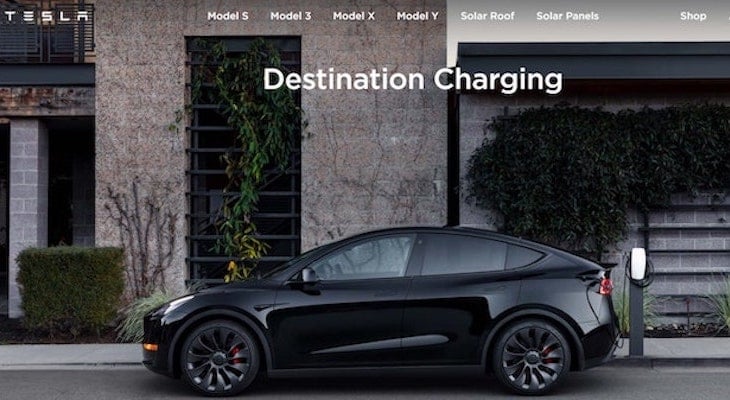 Whether you’ve driven a Tesla for years, are considering purchasing a pre-owned Tesla, or are simply in the market for your first EV, it’s normal to have a lot of questions. Electric automakers like Tesla are unveiling new technologies so fast, it can be difficult to keep up, whether it comes to on-board technology, battery range, self-driving technology, or charging.

In this article, we’ll map out the difference between Tesla Destination Chargers vs. Superchargers, so you’ll have a better idea of which type of charging station is best for you when you head out on that road trip you’ve been planning.

Some rest stops have gas stations. Some don’t. Similarly, not all Tesla Supercharger stations are Tesla Destination Chargers.

Tesla Superchargers are Level 3 DC fast chargers, and while Tesla Destination Chargers can be Superchargers, they are more often Level 2 chargers. Let’s unpack this more.

All Tesla Superchargers are Level 3 EV chargers outfitted with a connector to supply a direct current (DC) of electrical power at 72 kW, 150 kW, or 250 kW. As such, each is a designated DC Level 3 fast-charging location.

According to the Tesla website, Tesla Destination Charging locations must be able to host two or more Tesla Wall Connectors, each with a dedicated 208/240 volt 60A circuit breaker. That’s about as much electricity it takes to power one 240-volt appliance, such as an oven or a clothes dryer. While charging speed always varies depending on factors like vehicle and battery type, Level 2 chargers can take between eight and 10 hours to bring an EV to full charge. A DC fast charging unit similar to a Tesla Supercharger can fully charge an EV in less than 90 minutes — or up to 200 miles of charge in 15 minutes.

Additionally, while charging fees for use of Tesla Superchargers are arranged by Tesla drivers via the automaker’s app, there may be additional fees and charges added to charging costs at Tesla Destination Chargers.

Tesla uses the term “Destination Charger” cleverly. The designation of Destination Charger is actually meant to entice businesses like hotels, restaurants, and resorts into placing Tesla chargers on their properties. The motivation is twofold.

First, it gives businesses a way to leverage the Tesla brand with their own, making them appealing to visit or dine at for Tesla owners. At the same time, it allows Tesla prime real estate to showcase their vehicles at popular or well-traveled destinations.

Level 3 DC fast chargers require much more undertaking to install and they’re a much more robust electrical infrastructure to power. Although the exact number is not known, very few Tesla Destination Chargers are, in fact, Superchargers.

Ironically, the Tesla Supercharger network is so big, there’s very likely to be a Supercharger close to any destination you travel to in any major American city — even if your hotel offers Tesla destination charging.

Tesla Supercharger stations are most often located near highways, major transportation hubs, and near convenient amenities. The automaker suggests drivers of Tesla vehicles use them as a fast-charging source on long-distance road trips — as a “refueling” option in addition to home charging.

This idea is stated plainly on the Tesla website: “Superchargers are ideal for long-distance travel and are designed to charge your Tesla quickly so you can get back on the road. For daily commutes or local driving needs, there are a variety of home charger options.”

Another important thing to note: Tesla has offered free supercharging to new Tesla owners as a promotional program in previous model years, but these programs ended in 2017.

Who Can Use Tesla Chargers? 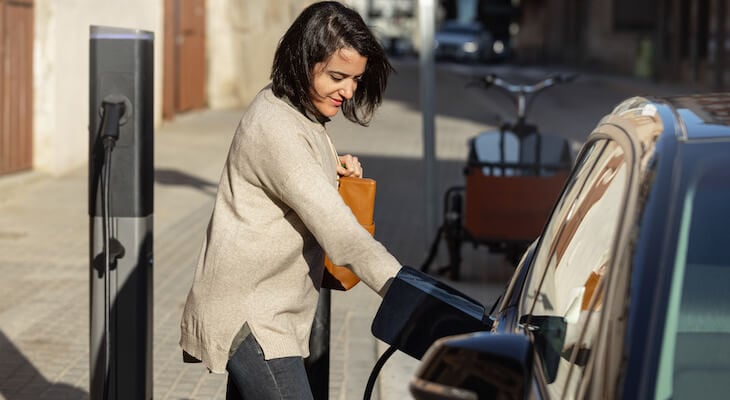 When it comes to Tesla destination charging vs. Tesla Superchargers, one major similarity remains: As of March 2022, only Tesla owners can use them. Whether you drive a pre-owned Model X, a brand new Model Y, or are awaiting your Tesla Model 3, only Tesla vehicles can recharge at Tesla Superchargers. This is true regardless of whether they’re Destination Chargers or not.

While non-Tesla drivers can’t use the automaker’s Supercharger network in the U.S. as of this writing, there are some signals that this might change in the near future.

Since late 2021, Tesla has opened up Supercharger locations in the Netherlands, France, and Norway that are accessible by drivers of other electric vehicle brands via the Tesla app (version 4.2.3 or higher).

What’s Tesla’s motivation for allowing non-Tesla drivers to utilize their Supercharger network as a charging option? It could open up a significant new revenue stream for the company, particularly as electric cars, pickup trucks, and SUVs become more and more common. It’s important to note, however, that Tesla has not announced any plans to bring this charging sharing program to the United States.

Don’t drive a Tesla? Looking for another public charging network when you’re on the road in your EV or plug-in hybrid? There are plenty of other options open to EV drivers who do not drive Tesla cars. Tesla drivers can also use these networks with an appropriate adapter.

Check out this guide on EVgo vs. ChargePoint if you need help deciding where to go.

Answer All Your EV Questions With Compare.com

Curious if a Tesla is the right EV for you? Have additional questions about EV charging, maintenance, or insurance costs? Compare.com can help.

Our library of EV guides will help you learn the basics in no time. When it comes to shopping the inventory of EVs in your neighborhood, you’ll be prepared to make the right choice for you and your family.