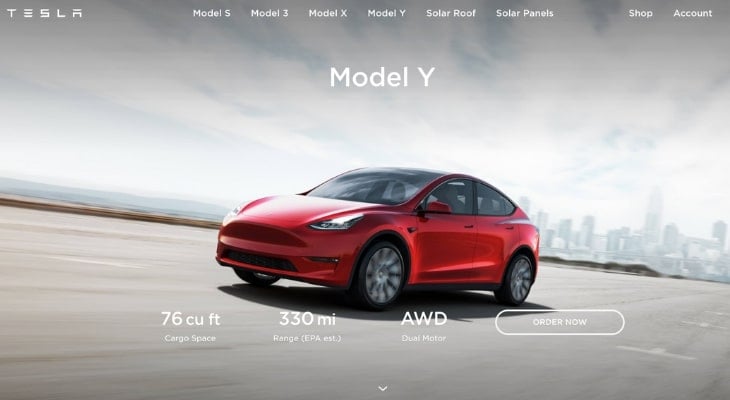 While the first electric vehicles were designed to be small, peppy vehicles with little storage space, their design and function continues to evolve. Looking for an all-electric crossover with plenty of room for all your family and friends? Tesla’s Model Y may be the new car you’re looking for.

The Tesla Model X and Tesla Model 3 have been trending for years in the all-electric vehicle market, and are extremely popular for commuting and city transport.

The Tesla Model Y is Elon Musk‘s brand’s first foray into the “family vehicle” segment, despite the car’s classification as a compact crossover. Along with the car’s increased passenger and cargo space, Tesla’s trademark enhanced technology and luxury-enthused comforts are all here.

Whether you’re planning a long summer road trip, or just want an all-electric vehicle with the practicality of plenty of cargo space, the Tesla Model Y Long Range could be the car for you.

In this article, we’ll check out the details of the car’s pricing, performance, and overall capability (plus ways to save on a purchase) so you’ll know what to expect before getting behind the wheel for a test drive. 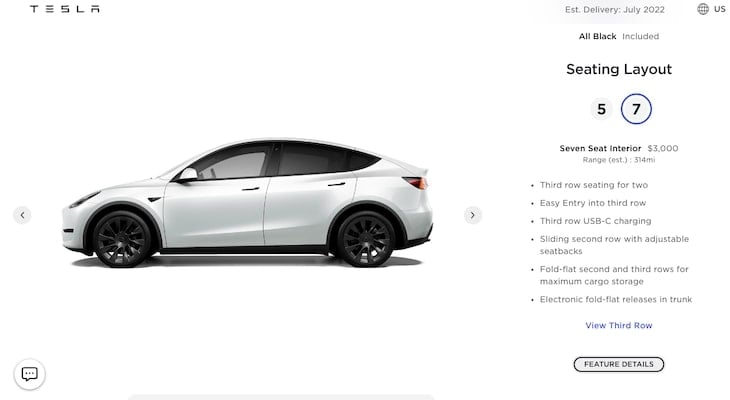 The Tesla Model Y Long Range with 7 seats has a starting MSRP of $61,990 before rebates and incentives. While Tesla vehicles are no longer eligible for federal tax rebates due to their volume of sales, new Teslas still qualify for state-based rebate and tax incentive programs for all-electric vehicles.

The interior of Tesla vehicles has gained a lot of widespread critical acclaim for their comfort and advanced technology, and the Tesla Model Y Long Range is no exception. In addition to offering heated front and rear seats (though the third row is not heated), the vehicle features several luxury-class amenities.

The Model Y Long Range comes with a tinted glass roof with ultraviolet and infrared protection that offers impressive skyward views and natural light throughout the cabin, as well as a dynamic climate control system with HEPA air filtration system to keep out fumes from gas-powered vehicles.

Lastly, the car’s premium audio system features 13 speakers and a subwoofer for fully immersive, high-quality sound throughout the cabin. Both music and temperature controls are all accessible through the vehicle’s expansive 15-inch touchscreen.

The Tesla Model Y 7-seater is powered by an all-electric dual-motor system and comes in both all-wheel drive and rear-wheel drive configurations. The car’s lithium ion battery pack is capable of an EPA estimated 318 miles of range on a full charge.

The Model Y’s two electric motors can reach a top speed of 135 MPH. The car also has a 0-to-60 time of 4.8 seconds, which makes it considerably more peppy than other seven-passenger vehicles drivers are accustomed to, particularly among other electric cars. 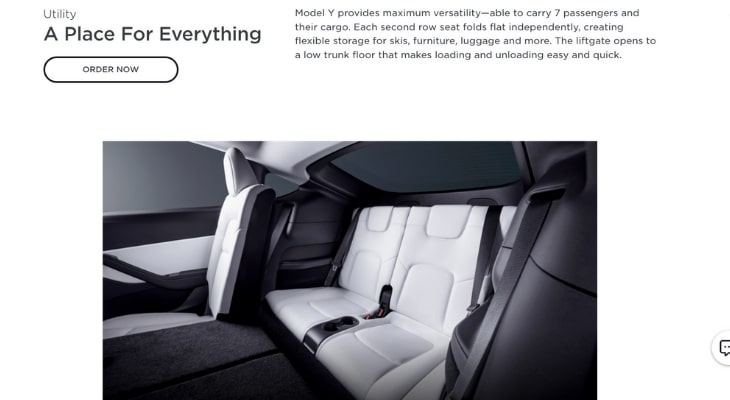 The additional headroom on the Model Y also gives the driver and front passenger an SUV-like experience. Critics and drivers have also lauded the car’s vegan leather seating material, a synthetic leather that’s very similar to the real thing in terms of touch and comfort.

The vehicle has a luggage capacity of 30.2 cubic feet with all seats occupied, and a maximum cargo capacity of 76.2 cubic feet with the rear seats folded. The space is more than enough for families traveling with vacation luggage and sports equipment. The expanded cargo capacity with all rear seats folded, meanwhile, is ideal for moves and other large hauls.

The rear location of the 7-seater Tesla Model Y’s dual-motor powertrain provides even more cargo functionality, since the front hood is freed to be a “frunk,” or front trunk.

The car’s seven-seat configuration is offered in a 2-3-2 arrangement, with both the second row and optional third row capable of folding down to create more storage space.

New Tesla drivers have an advantage over drivers who choose Model Y competitors like the Audi e-Tron, BMW iX, and Ford Mustang Mach-E: access to the brand’s Supercharger network. As of this writing, Tesla has initiated a pilot program to open their charging network to drivers of other EV brands, though it’s not yet happening in the United States.

The Supercharger system is a global matrix of 480-volt direct current fast chargers that make up the largest EV charging network in the world.

A Tesla Supercharger is an electric vehicle charger that provides 480-volt direct current fast charger technology. The Supercharger network is the fastest EV charging network in the world, and ideal for use in long-range travel.

Every Model Y comes with a home charger for everyday use. In addition, every Tesla vehicle is compatible with off-brand Level 2 fast charging units, which many Tesla owners choose to install at their home for their daily charging needs.

Who is the Tesla Model Y 7-Seater Best For? 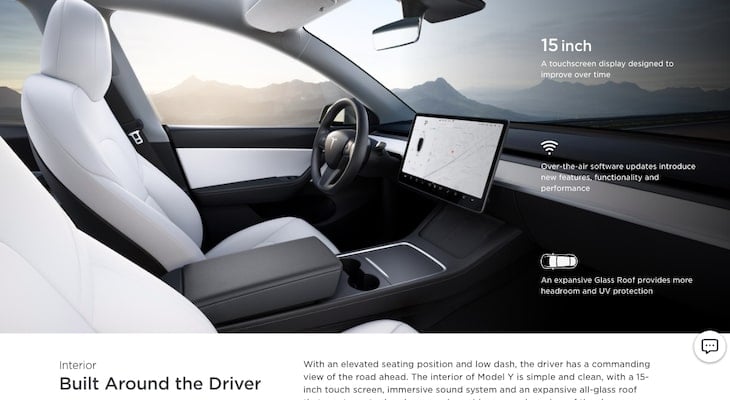 While the Model Y’s seven-seat capacity is certainly convenient for carpoolers and families, it’s not without flaw. The car’s optional third-row seat does not have the heating features that both the front and second seats offer. Additionally, the third-row seats are a bit cramped, particularly for adult passengers.

Many drivers insist that while the third-row seat is ideal for two small children, it cannot be relied on as an option for taller adult passengers. For this reason, the Tesla Model Y Long Range with optional third-row seating is best suited to families with several young children.

The car’s additional storage space with both rear seats folded makes it a great option for drivers of all stripes, particularly those who have to transport cargo regularly for work and play. That said, the Tesla Model Y Performance offers similar cargo space with the rear seats folded.

Another factor that will make the 7-seat Tesla Model Y Long Range appeal to families is its impressive safety scores. In addition to receiving five-star crash ratings across the board, the Tesla Model Y has a rollover risk of only 7.9%, the lowest risk ever recorded by the National Highway Traffic Safety Administration (NHSTA).

Much of the Tesla Model Y 7-seater’s high marks for safety are due to the absence of an engine in the front. Much of that space has been replaced by an additional protective barrier to deflect energy during head-on collisions.

Find an Electric SUV Near You

Whether you’re comparing the latest Tesla models or looking to save with an affordable used EV purchase, Compare offers a variety of resources for those eager to familiarize themselves with the EV market.

For further reading about saving money on Teslas, check out these articles: