Some make the case that “smart phone” is an oxymoron, a pair of contradicting words that don’t belong together. Or perhaps they’re lyrics to Alanis Morissette’s “Ironic” ditty that didn’t make the final cut. After all, for all of an iPhone or Droid’s technical prowess and digital smarts, they seem to have made us lazier, and well, dumberer, right?

If you agree, and you’d like to overtake your phone in terms of smarts, we have some easy suggestions for kicking it old school with your telecommunications and winning the battle of the brains.

Think before you Google 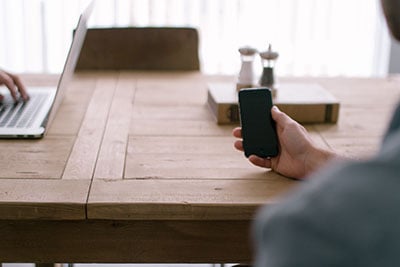 It’s become second nature to whip out our smartphones and either beckon Siri or starting typing in a Google query before we even think on our own. Google already displays a post-taxidermy encyclopedia above its fireplace, but will our cerebrum and frontal lobe also be joining the trophy room? One recent study says yes. In a study of 600-plus participants, those who were identified as “analytical thinkers,” and boasted stronger cognitive abilities, used smartphones far less than those who relied on instinct and gut feeling to solve a problem in a pinch. Of course, another way to look at these results is that smartphones provide a way to level the playing field for the more feeble-minded of us. Still, the takeaway is to turn off Siri, delete the Google icon and take the voice search off your home screen. The try your best to remember that recipe, address or C-list actor before resorting to fat-fingering a Google search.

Your bestie Jenni just added an Instagram selfie while pumping gas. Your old boss endorsed you for Microsoft Word on Instagram. And Pandora launched a new Hipster Hemp Crafting channel that it thinks you’ll like. Yippee. The next time a new app asks if it can send you push notifications, just say no. Turning off these distractions is the best way to get rid of that nervous tick. It’s a liberating feeling – and all that information will still be there when you’re ready and willing to dig in.

How long would it take you to get lost without your smartphone’s GPS app? One mile? A few more? What ever happened to embracing adventure, and treating a wrong turn as a chance to explore a new piece of the world? Unless that wrong turn was down a one-way street, in which case you should make your first possible U-turn and maybe turn the GPS on until you’re safely back on a trusted thoroughfare. Rest assured that all you need to get from Point A to Point B is a fold-up map – if you can find one – and a trusty gas station attendant, who may very well reach for his smartphone when you ask for directions to the interstate.

Scale down your data usage

Do you really need 500MB of data? Can you pause Pandora streaming and drop an old-school mix tape in your dusty boom box? What about shelving “Words with Friends” and actually playing Scrabble. You can cultivate your interpersonal communication skills – and use the savings to buy something for the e-reader – or an actual book, rather.

Get a home phone

While 90 percent of adults carry a cell phone, only two-thirds of U.S. households have a landline, according to Census Bureau data. Voice over IP landlines are available for $10 a month. And by restoring the literal cord, you’re cutting the much more brain-draining virtual cord of your smartphone. Have fun with it; get a hamburger or convertible car phone.

Hand it to your toddler…

There are anti-screen time parents who would take issue with any soothing Toddler smartphone apps. But the reality of overworked, two-income households that need an occasional digital distraction for their children is that they’re going to handle your phone. And by handle, we mean erase apps, rearrange icons, accidentally FaceTime exes, and make your phone such a mess that you won’t want to play with it anymore. Instead, you’ll play with your kid. And you’ll both become smarter.

You can be smarter than your smartphone. It may take a little discipline and some out-of-the-box thinking, but this guide can be a solid start.