The year is 2025, and night is falling in L.A. You and some friends are heading to a punk-hop bar across town. Instead of hailing a cab, you signal a driverless Mercedes F 0 15 (hey, we’ll all be rich by then, right?). A sleek white pod pulls up, and you and your crew climb into the cushy lounge space inside. The future is great — until you hit traffic congestion, and the car glides to a stop.

Driverless cars promise to fix a lot of problems: driver distraction, drinking and driving, car emissions, etc. But one problem will be tougher to solve: traffic jams. Rush hour is rush hour, whether a person or a computer is driving the car. And, as The New York Times wisely points out, “traffic is one of the few problems that fabulously wealthy people can’t buy their way out of.”

That’s why a lot of smart people are working to find data-driven solutions to congestion, in the age of the driverless car and beyond. Tunnels? Flying cars? Here are a few more down-to-earth ideas. Which do you think will work?

In 2011, some scientists reached a simple but startling conclusion: Adding roads does nothing to relieve traffic congestion. Their “Fundamental Law of Road Congestion” says, in short, that if you build roads, they’ll fill up, and that providing public transportation as an option doesn’t help reduce traffic. One thing that does help, however, is congestion pricing.

In London, for instance, people have to pay around $14 per day, in 2017 dollars, to drive in certain areas between 7 a.m. and 6 p.m. Beginning in 2020, drivers will have to pay an additional charge unless they’re in ultra-low/zero emissions vehicles. American drivers have resisted this idea, but sooner or later, we’ll have to try it.

2. Find out where the heck everyone’s going. 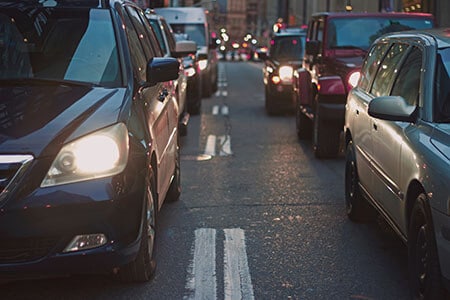 Cities have a big blind spot: “For the most part, they have no idea where entire neighborhoods of people go when they leave home (let alone specific individuals). And they know even less about the trips people aren’t taking but might take if they had more affordable or convenient transportation options,” writes Corinna Li of Sidewalk Labs. Basically, they have no idea why certain traffic jams happen, or how to help.

Sidewalk Labs, a recent spinoff of Google, is developing a software platform called Replica that tracks commuter behavior to help city planners and transportation engineers better understand why people move as they do. Only then can they offer alternatives that people will actually use.

Another problem Sidewalk is tackling is the congestion caused by cars circling in cities as they search for parking. “Since every drive ends at a parking space, every extra minute spent circling for that space means more traffic frustration, more wear and tear on local roads, and more damage to the planet,” Sidewalk parking expert Willa Ng says. Big Data is already offering some possible solutions, such as “community-based parking.” As more and more cars get parking-assist systems, those systems can measure the spaces between parked cars as they drive past. Combine all this information and you get a real-time parking map to guide other drivers.

Another idea is automated valet parking. Imagine pulling up to the entrance of a parking garage, getting out of your car and letting the car park itself. It’s not as far off as you think — BMW already offers fully automatic parking on some models.

4. Get rid of all human drivers.

A single person slamming on the brakes or changing lanes is all it takes to cause a traffic jam, as this traffic simulator shows. The converse is also true: If everyone maintained a perfectly consistent following distance, we’d have much, much less congestion. But there’s only one way to make that happen, and that’s getting rid of human drivers. “The more robotic cars on the road, the more they can communicate, follow these rules, and make commuting more efficient than it ever could be with even one human driver in the mix,” Road & Track says.

5. Learn to live with traffic congestion.

Even if we paved 12-lane highways between every destination, we’d still have traffic — and that’s OK. Traffic congestion is how we manage competing demands for road space. In loftier terms, “peak-hour congestion is the balancing mechanism that makes it possible for Americans to pursue other goals they value, including working or sending their children to school at the same time as their peers, living in low-density settlements, and having a wide choice of places to live and work,” argues a Brookings Institution expert.

Next time you’re lingering at the office, waiting for rush hour traffic to end so you can go home, take a few minutes to save big on your car insurance. In just a few minutes, you can get free quotes from multiple insurers through Compare.com. Try it — it’s easy!
[socialpoll id=”2425831″]