Drivers in California must show financial responsibility – usually, this means drivers must carry proof of car insurance.  In California, this proof can also take the form of a $35,000 deposit with the DMV, a $35,000 surety bond, or a DMV-issued self-insurance certificate. You must carry this proof with you at all times, in case you are in an accident or stopped by the police.

California also requires insurance companies to electronically report insurance information for private-use vehicles, so that the DMV can determine whether or not you meet the coverage requirements.  California’s minimum insurance coverage levels are:

Medical payments, collision insurance and comprehensive coverage are not required by law in California.  However, between medical bills, bumper damage and possible lawsuits, you may wind up owing far more than the state minimum coverage is able to cover.  Keep this in mind when you’re shopping, and be sure to get the most appropriate coverage for you.

On the hunt for cheap liability car insurance? We can help you find it. In California, all you need is a state minimum policy with 15/30/5 coverage, which means $15,000 per person and $30,000 per accident in bodily injury liability, plus $5,000 in property damage liability.

So how much does a cheap liability insurance policy cost? In California, the average plan costs $841 per year for liability only. But you can’t trust that your current insurer is giving you the best rates, so you need to compare personalized quotes. It only takes a few minutes on Compare.com.

Failing to meet California’s minimum requirements may result in an any number of penalties. These include:

To learn more about the requirements and penalties, visit the California Department of Insurance.

There’s a lot to things to worry about when you have a child – how to put your child safely in a car seat is something all parents worry about at one time or another. Learn what California’s Car Seat Laws have to say on the matter.

Read our California Car Registration and Licensing guide to learn what steps you need to take when getting a California driver’s license, registering your car, and more.

California is known as “the strangest state west of New Jersey,” and car insurance in California is strange too. The nation’s most populous state has some unique car insurance laws that cause wide variations in how much a policy costs. That means it’s especially essential for California residents to shop around for the best deal on car insurance. We’ll show you what we mean with this California auto insurance comparison chart.

Which Direction are Car Insurance Rates Heading in California?

So, if you haven’t shopped around for car insurance in a couple years, it might be time to compare rates. Just based on this chart alone, you could end up saving some significant cash.

Which Age Group Gets the Cheapest Rates?

By analyzing premiums by age range, we find that the drivers 55-64 tend to have the lowest rates. To little surprise, young drivers under 18 top our list as the most expensive age group to insure.

Will Your Gender Dictate How Much You Pay?

It’s good news if you’re a female driver in California. Men are paying more for car insurance across the state on average.

This might change, however. As of June 1st, 2019, car insurance companies are forbidden from rating consumers based off of gender. As a result it’s possible that men could pay slightly less for auto insurance, and women slightly more. This is in line with previous regulatory changes in California car insurance. As a consequence of Proposition 103, passed in 1998, a car insurance quote should be primarily based off of a consumer’s behavior, rather than factors outside of their control.

How Much does Your Driving Record Affect Your Rates?

To no surprise, the less tickets and accidents you have on your driving record, the better. Even just a single speeding ticket can cost you. As you can see, you could be paying as much as 30% more than the average rate with just a single infraction on your record.

If you want to get the cheapest car insurance possible, remember to drive safely and do your best to keep a clean record.

And keep in mind that accidents and tickets will drop off your record every six years, so if you have an accident from a few years ago, but have kept a clean record since, it may be time to start shopping around so that you can save some money.

What Cars are the Cheapest to Insure in California?

As you can see, trucks and vans tend to be the cheapest vehicles to insure in California, with an average rate of right around $50 a month. Cars come out as the most expensive, at $57 per month.

How old your car, truck, or SUV is will play a big role in how much you pay as well. Generally, brand new cars are going to be the most expensive to insure, and old cars with little value will be the cheapest.

As you can see, the difference in rates between a new car and one that’s 15 years old or older can be as much as 15%.

Does Your Relationship Status Affect Your Car Insurance?

You may not realize it, but your relationship status can actually play a pretty big role in how much car insurance companies choose to charge you for insurance. In most cases, married drivers will end up with lower rates. This often boils down to having multiple vehicles on the same policy, which can get you a discount from most insurance companies.

Another factor that can come into play is your housing situation. As you can see in the chart above, homeowners tend to pay slightly less for car insurance than those who are currently renting. This is often the case because insurance companies see homeowners as being more financially stable, putting them at less risk to miss payments.

California Car Insurance Comparison Charts: Which Profile is Most Like You?

As is the case in many states, car insurance rates in California can vary wildly. Insurance companies use a wide array of factors to help calculate the rates you might pay. These include things out of your control like your age and gender, but also things like your driving record, housing status, and education level.

To help you get a better idea of what you might end up paying for car insurance, we created a few California car insurance comparison charts. Each of the three profiles below are from actual Compare.com customers and the quotes are 100% real. Which of them is most like you? 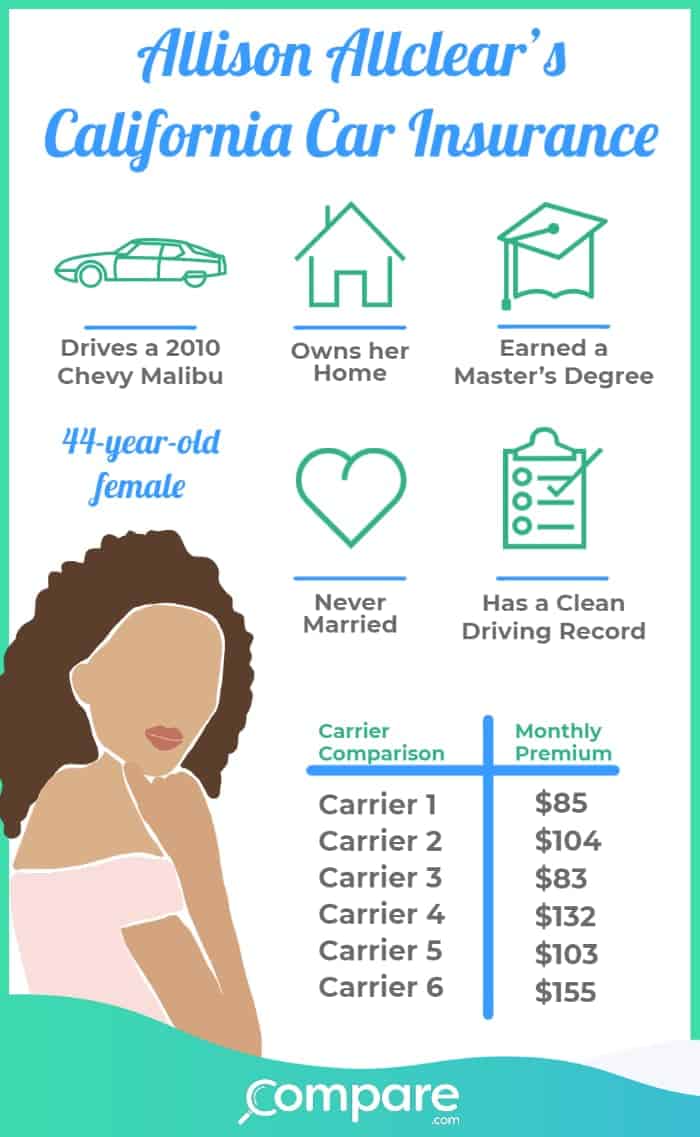 As you can see, Allison Allclear is a 44-year-old female driver in California. She’s classified by many insurance companies as “low risk” because of her clean driving record. That, combined with the fact that she owns her car and house and has a master’s degree, leads companies to offer her some pretty competitive rates. 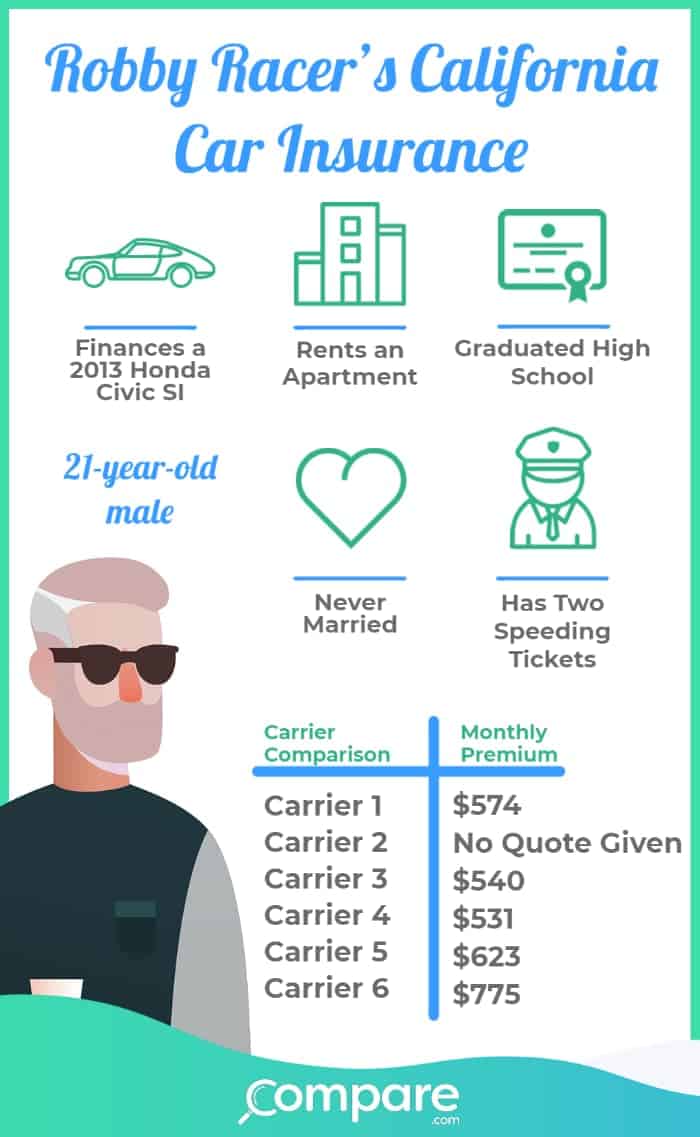 Robby Racer’s insurance profile isn’t quite as appealing to many insurance companies. Because he’s young and has a spotty driving record, the quotes he’s offered from carriers are significantly higher than Allison’s — some as much as 7 times what she’s asked to pay! 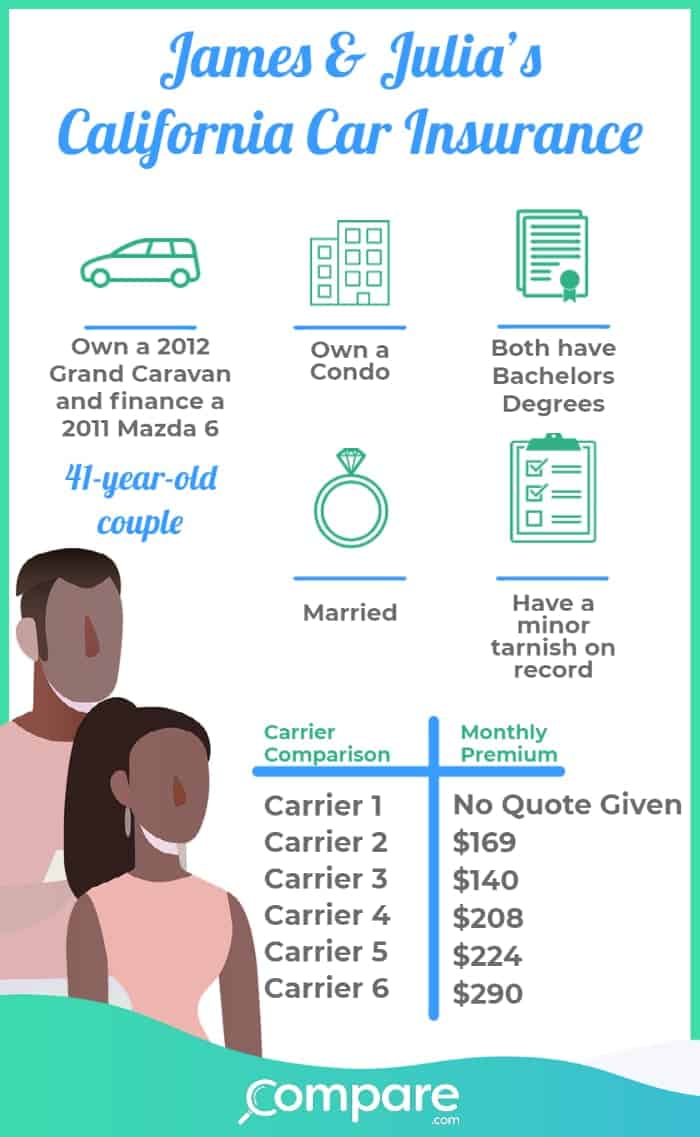 James and Julia are a 41-year-old married couple from California. They have a multi-vehicle policy, which saves them money each month, and with a pretty average driving record, their rates reflect that. 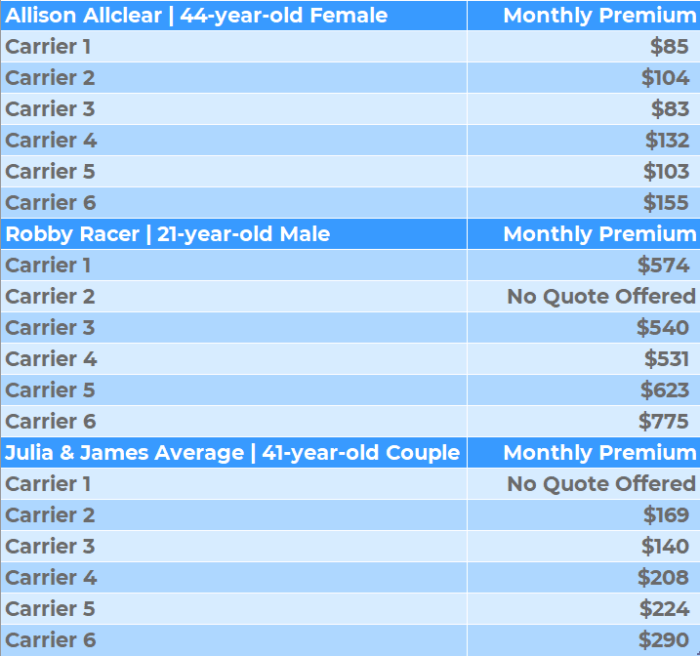 Each one of these are actual quotes obtained by real Compare.com customers. All we’ve changed are the names of the people and the carriers.

In California, drivers are required to carry at least $15,000 in bodily injury coverage per person, $30,000 in bodily injury coverage per accident, and $5,000 of property damage coverage. If you don’t want to carry insurance, you have a few other options for demonstrating financial responsibility, such as a $35,000 cash deposit with the state Department of Motor Vehicles or a surety bond for the same amount.

What if you can’t afford California auto insurance? Low-income drivers may be eligible to participate in the California Low Cost Automobile Insurance Program. This program is open to people 19 and older who have a valid California driver’s license, own a vehicle valued at $25,000 or less and meet income eligibility guidelines. Find out if you qualify by taking this online questionnaire.

What about high-risk drivers? If your driving record is tarnished, you need to shop around for the lowest rate available. In our California car insurance comparison chart, Johnny Racer is looking at monthly premiums as high as $775 because of his age and his two speeding tickets. That’s almost twice as much as the $417 offered by another carrier — and that’s why it’s so important to compare insurance quotes on compare.com before you buy. It’s free, fast and easy.

Which California City has the Cheapest Car Insurance?

Click on the name of each city in the table above to find detailed breakdowns on all the factors that go into calculating your monthly premium. Here, you’ll find all the information you need on how things like driving record, age, gender, vehicle make and model, and more will affect how much you pay for car insurance in each locality.

And if you want to jump right in and see how much you’ll pay, simply enter your ZIP code below and find your best rate in minutes!

Compare.com works directly with dozens of insurance companies to show you real prices that you can actually buy. Some of the insurers that we compare are:

If you’re in the market for a new or used car, you’ll need to budget for more than just the vehicle’s sticker price. You’ll be on the hook for basic DMV fees like title, license plate, and registration fees no matter where and how you purchase your new car, truck or SUV, as well as buying a new car insurance policy for your car. But some buyers will find themselves with additional fees such as sales tax, documentation fees, personal property tax, emissions and inspection fees, hybrid and electric vehicle fees, lien recording fees and a slew of other costs.

Check out Compare.com’s comprehensive vehicle costs breakdown to make sure you account for all the added fees you might be on the hook for when buying a car in California.