A recent study by United Ways of Virginia found that nearly 1 million people throughout the state are employed, but still do not make enough money to cover their bills each month. 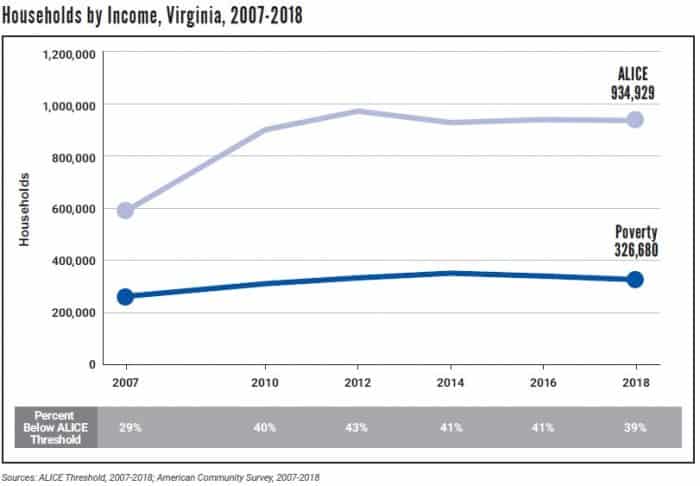 According to the 2020 Virginia ALICE Report – which was made possible through a strategic partnership with Compare.com – a growing number of Virginians are being identified as ALICE, which stands for Asset Limited, Income Constrained, Employed. This is essentially the individuals and families who work hard to earn a living, but still don’t make enough to cover their basic household and living expenses each month.

United Way found that while the federal poverty level sits at $1,012 per month for a single individual, the “Household Survival Budget” which estimates the bare-minimum cost of basic necessities, is more than double that amount. In fact, the two most basic living expenses, housing and food, end up running the average Virginian $200 more each month than the federal poverty level alone. And that’s not taking into account other necessities like transportation, health care, taxes and other expenses. 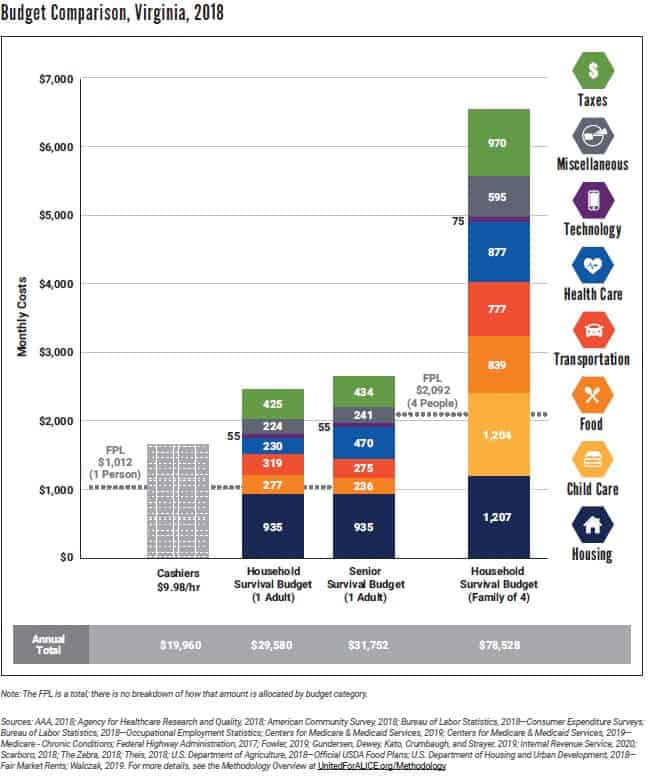 Even a person who makes $10/hour – almost 30% more than the minimum wage – falls nearly $900 short of the Household Survival Budget each month.

The situation gets even more grim for Virginian families. According to the United Way report, the Household Survival Budget for a family of four is more than $6,500 each month. That’s almost $4,500 above the federal poverty level for four-person families.

To put it simply, a family of four would have to earn well over three times the federal poverty level just to cover the bare minimum living expenses in Virginia.

In total, 39% of Virginia’s households fall below the ALICE Threshold, with minority households suffering the worst.

Half of all Hispanic homes and 55% of Black households fall below the ALICE Threshold. Additionally, 73% of those under 25 years old and a whopping 76% of single mothers fall into that category.

Possibly the worst part is these statistics seem to be trending in the wrong direction. In 2007, there were around a quarter million more medium-wage jobs than low-wage ones. Since then, those numbers have reversed. It’s no coincidence that the number of ALICE households has increased by nearly 50% during that same time frame.

Lifting up ALICE benefits everyone

So, what can we do to reverse these trends and ensure all Virginians, and Americans for that matter, earn enough to provide for themselves and their families? United Way has a few ideas.

The first revolves around access to libraries, which can be a critical resource for this growing segment of the population. Because libraries provide access to free internet, community programs, information on job opportunities and social services, meetings and other resources, they play a major part in helping to uplift lower-income communities. If government officials and other decisionmakers ensure lower-income communities have sufficient access to public libraries, these negative trends may slow down or even reverse. 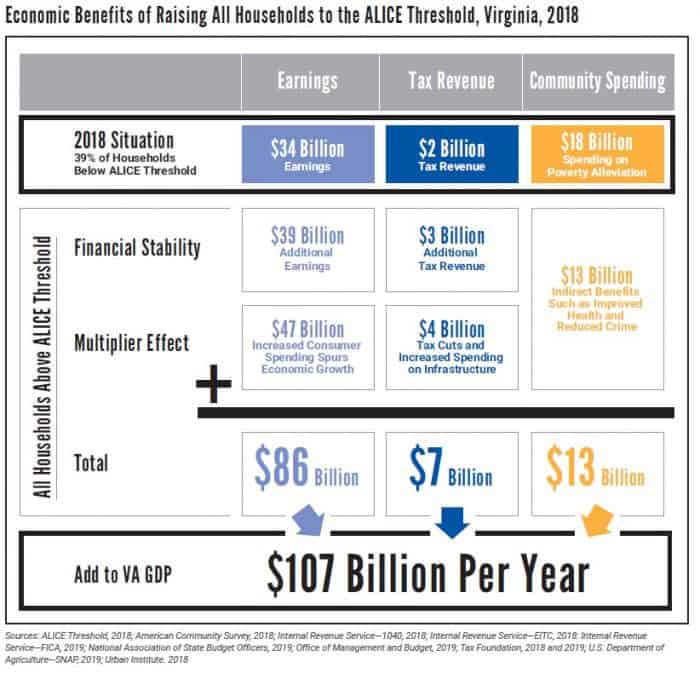 Perhaps the most important factor in bringing 1.2 million Virginia to a point of financial stability is moving toward financial equity across the state. Based on data in the United Way report, if Virginia were to increase wages to bring all households above the ALICE Threshold, it would result in approximately $107 billion in economic benefit to the state. That’s a 20% increase in statewide GDP.

The effects would be life-changing for affected households while also providing a massive economic benefit to the state as a whole. To put it simply, if we bring affected households back above the ALICE Threshold, everyone wins, no matter your background, age or socioeconomic status.

Filling the gap through savings on essential items

Until everyone finds themselves above the ALICE Threshold, Compare.com will be working with United Way and other organizations to help these households save money and find their own versions of the American dream. After all, that’s what we’re here for.

According to United Way, transportation costs make up between 10 and 15% of the total Household Survival Budget, with a big part of that coming in the form of car insurance.

Since every American driver is required by law to purchase an auto insurance policy, finding ways to save on your monthly or annual premium can play a big part in filling the financial gap for ALICE. That’s where we come in.

We recently conducted a study of over 2,500 American adults and found that not only are Americans in dire need of more money in their pockets, but also more time on their hands. As more and more Americans work hard to rise above the ALICE Threshold, the gig economy finds many working multiple jobs or spending time on side hustles to make ends meet.

That’s what makes services like Compare.com so important, especially for those struggling to make ends meet. By having the ability to compare multiple products at once and making companies compete for your business, you can get the best price in a matter of minutes, saving both time and money that can be used on other important tasks and expenses.

Ultimately, that’s why we’re here. We’ve made it our mission to use our platform to provide resources that empower ALICE to make smart financial decisions that will help them win a game that seems stacked against them. At the end of the day, everything we do comes down to helping ALICE overcome their financial struggles so that they can find a better future for themselves and their families.

Working together toward a better future 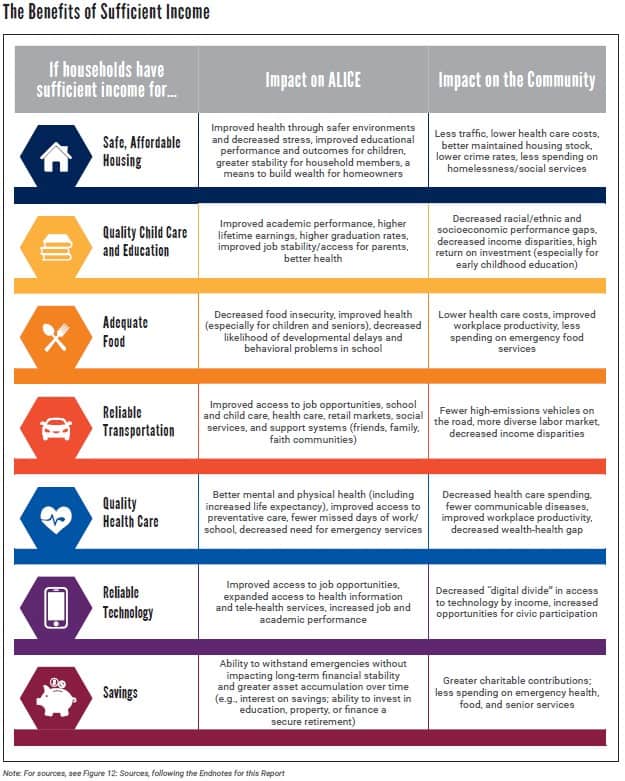 Through continuous research, we’ve found that groups like ALICE are the ones who benefit most from our services. By partnering with United Way and joining the National ALICE Advisory Council, we’re able to work together to help ALICE focus on the things that matter most rather than worrying about a necessary monthly expense like car insurance.

Join us in supporting United Way and its efforts to strengthening communities and families and bringing a higher quality of life for all. Learn more about ALICE by visiting UnitedForALICE.com and support the movement by donating or volunteering.

Together, we can make a difference.