Home Auto Insurance Resources Did You Have a Car Accident Involving a Deer?

Did You Have a Car Accident Involving a Deer?

A century ago, white-tailed deer were rare on the East Coast. Now they number more than 20 million, and they’re everywhere: in back yards, in parks and on the roads. Collisions with deer cause 200 human deaths and cost more than $4 billion per year. Don’t assume it won’t happen to you! Deer car accidents are more common than you think. In fact, you have a 1/169 chance of hitting a deer, according to State Farm. Here’s what you should do if you get into a deer car accident.

What to Do if You Hit a Deer

Two eyes shining in the road. You hit the brakes, but it’s too late: You hear a thump as you strike the deer. What should you do if you hit a deer?

If your car has sustained minor damage, it might be tempting to drive away. Don’t do it. Pull over in a safe place and call the police to report hitting a deer. Take pictures of the scene and any damage to your car. If there are witnesses, ask for their contact information.

If the deer is alive and lying in the road, don’t try to move it yourself. You could be injured by a frightened, hurt animal. If you see a deer that appears injured — with a broken leg, for instance — don’t try to catch it. Mark the spot and call your local wildlife rehab group.

How does hitting a deer affect your car insurance?

A collision with a deer is typically a covered loss, according to Allstate. Read your comprehensive coverage policy to see if collisions with animals are covered. If there’s no physical contact with the deer (e.g. you swerve and hit a tree), it will probably be considered a collision loss. Some states let the policyholder choose if the loss should be paid under collision or comprehensive coverage.

The average cost of a deer crash? $3,900, State Farm says. The good news is that insurers typically don’t hold drivers responsible for car accidents involving deer, and so your rates are unlikely to increase.

When do deer crashes occur?

Deer car crashes are most common in October, November and December, with November being the peak.  This is mating season for deer, so deer tend to roam more. They also can be more prevalent in late spring and early summer, when young deer start to establish new territory for themselves.

Crashes occur most frequently at dawn and dusk, as deer come out to feed. Plus, lower visibility makes it more difficult for the driver to see them. While they’re more common in rural areas, suburban crashes can happen as well – particularly as new development infringes on deer habitats.

The most common states for deer car accidents tend to be Midwestern or Appalachian, with Michigan, Wisconsin and West Virginia reporting the most crashes per capita. Crashes are also prevalent on the East Coast and the Pacific Northwest, though to a much lesser extent.

How to avoid a deer car accident 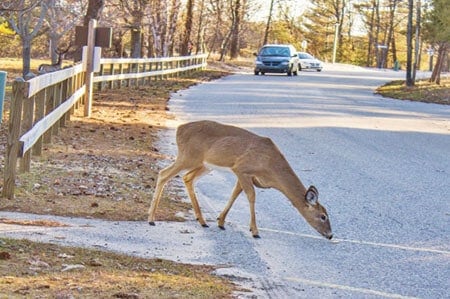 Even though car accidents caused by deer are common, they’re not inevitable. To avoid hitting a deer, you should:

Should you hit a deer?

If you see a deer ahead of you on the road, it’s important not to try to swerve out of it’s way. Deer car crashes because approximately 200 fatalities per year, and many of them result from car crashes caused by the driver attempting to swerve. Instead, make sure to slow down, and if the deer refuses to move, simply prepare for impact.

Some people say you should speed up instead of braking if you can’t avoid hitting a deer, but a Mythbusters investigation involving a rubber moose found that to be a myth. It’s safer to strike an animal at low speed, the show discovered, than to speed up hoping to launch the animal over the vehicle.

Can you eat a deer you hit with your car?

You can, if you follow the proper safety procedures and obey state law. Modern Farmer magazine argues that eating roadkill is not only sensible but is eminently ethical. If even a third of the 1.23 million deer killed each year could be salvaged, the magazine says, it would amount to about 20 million pounds of free-range venison.

To salvage a freshly struck deer, you need to act quickly. On a warm fall day, the carcass should be gutted and cooled within 4-5 hours — ideally within 30 minutes, Superior Meats owner Jerry Stroot tells The Missoulian. Pay attention to how the deer died, too. If the deer is struck on the head, that’s a clean kill. The meat is likely not usable if it’s been battered and run over. If you’re not an experienced hunter, get help from one when you’re assessing and processing the carcass.

But is it legal to harvest a deer struck by a car? That depends on where you live. Texas, Tennessee, California and Washington prohibit collecting roadkill. In West Virginia, it’s fine as long as you report the kill within 12 hours; in Wyoming and Vermont, you must have a game warden tag the carcass.