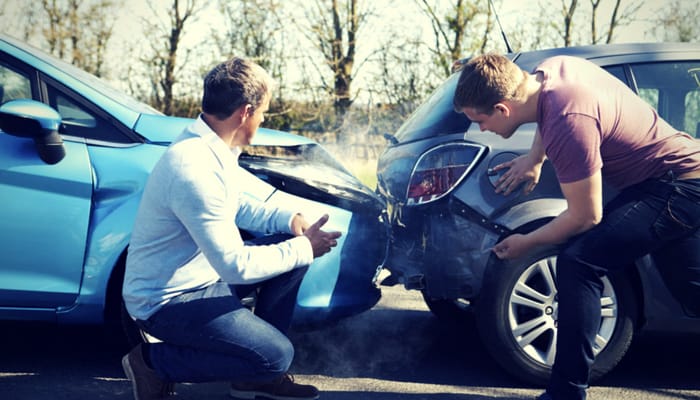 Parking lots are dangerous places. Limited visibility and what can, at times, be intense competition for a parking space contributes to the danger of operating a vehicle in a tight space with other moving vehicles. Parking lot accidents are some of the most common types of car accidents, but despite that fact most Americans aren’t clear on who is responsible for a fender bender that occurs in a parking lot. We took five of the most common parking lot fender benders and made a quick guide to liability when driving in parking lots.

Who is at Fault in a Parking Lot Fender Bender?

Right of way is typically the primary factor that determines fault in auto accidents, but in a parking lot that can get a bit murky. Here are two fast and easy ways to know whether or not you were in the wrong if you’re ever in a car accident in a parking lot.

Was your car moving?

If only one car was in motion, then the driver of the moving car is typically at fault. Not always, but the majority of the time. If you are legally and
correctly parked and your car is hit by a moving vehicle, it’s usually that driver’s fault and not yours. Of course, if you are incorrectly or illegally parked, you may be to blame.

Who has the right of way?

This can get pretty sticky because not all parking lots are laid out better than others. Stop signs, yield signs, and other signage and markings help to establish how traffic is intended to flow in a parking lot and thus establish right of way—but not all parking lots have these guides. As a general rule, a driver who fails to yield or stop at a stop sign is at fault in any resulting accident.

When it comes to driving in parking lots, there are several accidents that happen most frequently. This is largely due to how most parking lots are laid out. They are also a result of basic driving mechanics and bad timing. Let’s take a look and see how these accidents happen (from your perspective) and how we can identify the driver at fault.

Another Driver and I Backed into Each Other

Both drivers are moving, which makes them each responsible for their actions. Neither driver has the right of way and each driver is responsible for ensuring that the movement of their vehicle won’t result in an accident. In this scenario both drivers would be at fault (though some insurers will label the accident as “no-fault”. When it comes to filing a claim with your insurance company, each driver’s payout will come from their own insurance company.

Another Driver Pulls Out Into Traffic from their Parking Space

At some point you’ve either been the guy in the parking space or the other guy. It’s incredibly common and after all, it’s hard to see around the SUV parked next to you when you’re driving a Mini Cooper. In this scenario, the person pulling out of the parking space is usually at fault. It’s their responsibility to yield to moving traffic, even if they can’t see oncoming cars. It’s possible both cars are responsible since both cars were moving, but it’s not a common outcome.

Another Driver Backs Out of a Parking Space into Your Car

Similar to the previous scenario, both cars are moving so it’s again possible that both cars are at fault. Of course, the way it tends to work out is that the car backing out of the parking space is liable. When it comes to handling your insurance claim, typically the each driver’s insurance company will pay their own claim (as opposed to the other driver’s insurance paying their claim).

Two Drivers Collide while trying for the Same Space

Who’s at fault? Again, good chance of both drivers being at fault, but most of the time the driver who has to cross the stream of traffic to take the parking space is the one that’s liable. That means the driver who had to turn left to take the space is most likely to be at fault. Other factors such as the point of impact on the vehicles will be used as a determining factor since that information could reveal that one driver was mostly in the space or was already turning into it when another driver tried to take it. If this scenario happens to you, take pictures to provide your insurer if you feel you were not at fault.

This fender bender is common just about everywhere. Despite being large and red, people sometimes fail to see stop signs, which often results in a car accident where the driver who gets hit is free of fault. The driver who failed to stop in time is typically at fault here.

They happen. Most of them don’t require a police report, but if you find the other driver involved to be aggressive or if they appear to be under the influence, it’s probably a good idea to give the police a call. Always take photos if you can and always report car accidents to your insurance company.

How Much Will Your Premium Rise After a Fender-Bender?

Car accidents are bad enough without tackling insurance claims. Many people sustain serious injuries and are afraid to drive for months following the incident. To make matters worse, some people also have to worry about a hike in their insurance premiums.

It’s no secret that if you plow into another car, your premium will likely skyrocket. But what about fender-benders?

According to Esurance, it’s a complete myth that you’ll wind up paying a higher premium regardless of the size of the accident. In fact, filing a claim doesn’t necessarily equate to shelling out additional funds.

Some drivers are so nervous about premium increases, they won’t file claims following an incident. However, several factors play into the rate decision, including the severity of the accident, your driving history, who’s to blame, whether you’re no-fault and your policy’s details.

The amount of time an accident stays on your record depends on where you live and the violations that were a result of the accident. The Department of Motor Vehicles can be a useful resource to learn more information relevant to your situation.

“If you weren’t at fault for the accident, it may not impact you at all.”

As insurance varies from company to company and person to person, it’s hard to put a number on how much you could face if an accident is your fault. However, in most states, after you’ve been in an accident, the premium decreases every year you’re accident-free.