Home Auto Insurance Resources What Does “Dream Car” Really Mean to Most People?

What Does “Dream Car” Really Mean to Most People?

Most of us have a dream car – a vehicle we want more than any other on the market. Maybe we think it would be exciting to drive, or maybe we believe it would make time spent in the car more enjoyable. In our recent study of over 1,100 Americans, our aim was to understand what the average person thinks of when picturing the car of their dreams. Here are our findings about what people want most in a car and what they’re willing to spend to make the dream a reality.

Picture the Car of Your Dreams

When you think of the car you want most in the world, what do you see? A high-end model of a practical sedan? A luxury convertible built for looks and speed? While most of us have different ideas about the make and model of car we would love to own, many of us agree on which features are the most desirable. Here’s a breakdown of what makes a dream car in America. 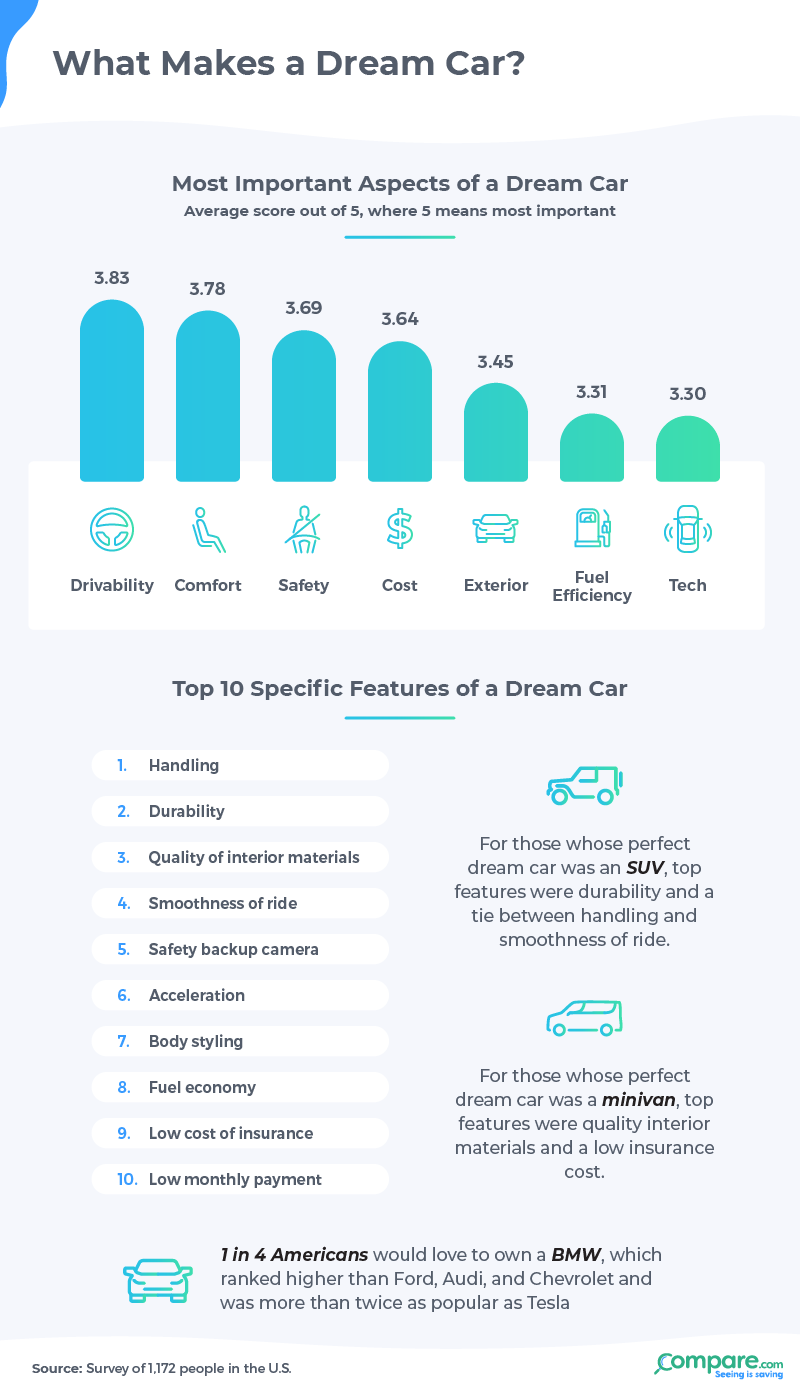 When considering their dream car, Americans were most concerned about how it feels to take it out on the road for a spin. Is the car easy to handle? Are the seats comfortable and the ride smooth? According to our results, drivability, comfort, and safety were at the top of most people’s wish lists. We also discovered that women believe comfort is the most important factor of all and that safety ranked higher for women than men.

Based on recent vehicle sales, the top car brands in America are Ford, Toyota, Chevrolet, Honda, and Nissan. These are the cars that most people are buying and driving on a daily basis; however, only two of these brands made it onto our list of most wanted dream cars. BMW emerged as the most desirable dream car brand: 1 in 4 Americans would love to own a Bimmer someday. BMW ranked higher than Ford, Audi, and Chevrolet and was more than twice as popular as Tesla.

SUVs were the most popular fantasy car in the U.S., with 30% of Americans dreaming of owning one. Drivers want a very durable sports utility vehicle that’s both easy to handle and smooth to drive. SUVs have been outselling sedans for years now, and their popularity shows no signs of slowing down. SUVs are actually forecasted to make up 78% of car sales by 2025.

And the most popular color for a dream car? Dark, sleek, sophisticated black. Though black cars are seen as elegant, the more economic choice may be yellow when it comes to resale.

The Influence of Age and Lifestyle

Does our birth year or gender affect what we think of when picturing our dream car? What about where we live or whether we identify as a car enthusiast? We dove deeper into the thoughts of the average American to discover the effects of these factors and more on our desires. 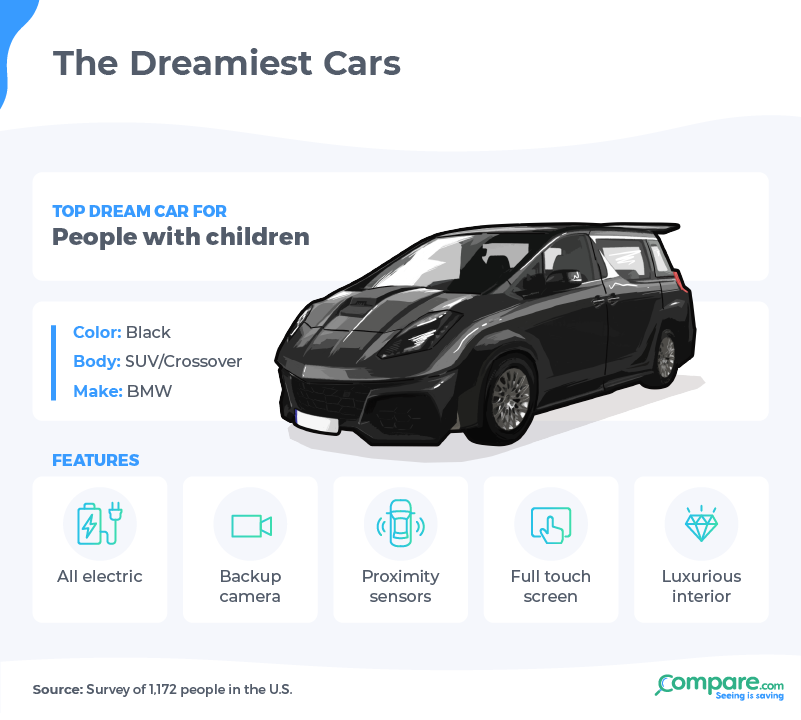 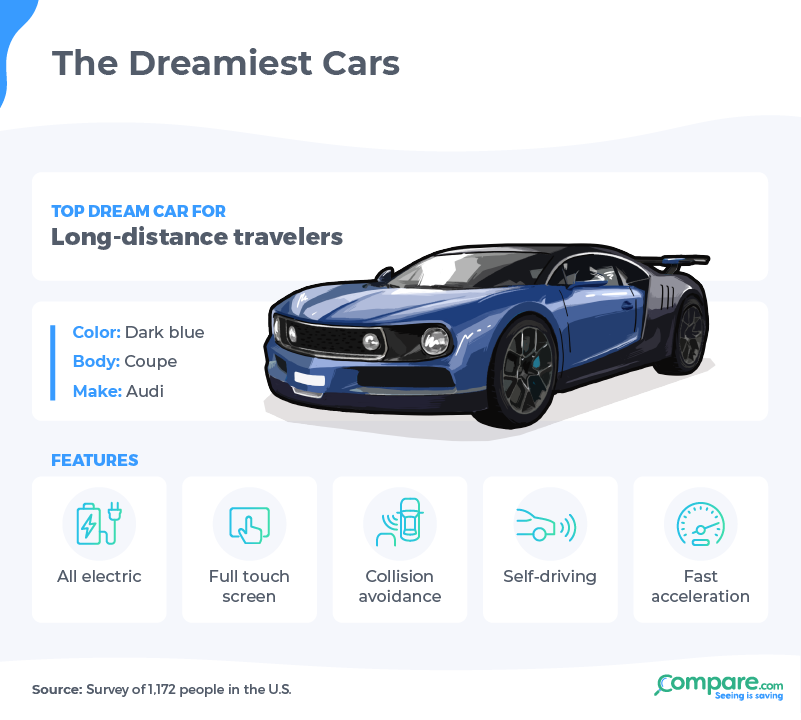 Other studies reveal that most people are looking at function and cost when purchasing a new car. They also factor in their previous experience with a brand or model. We determined that what most people are looking for in a dream car varies widely depending on their lifestyle, too, with drivability topping our lists as well. Black was still the most popular color choice overall; however, pearl was the top choice for urbanites, while bright red won out in smaller towns and rural areas. 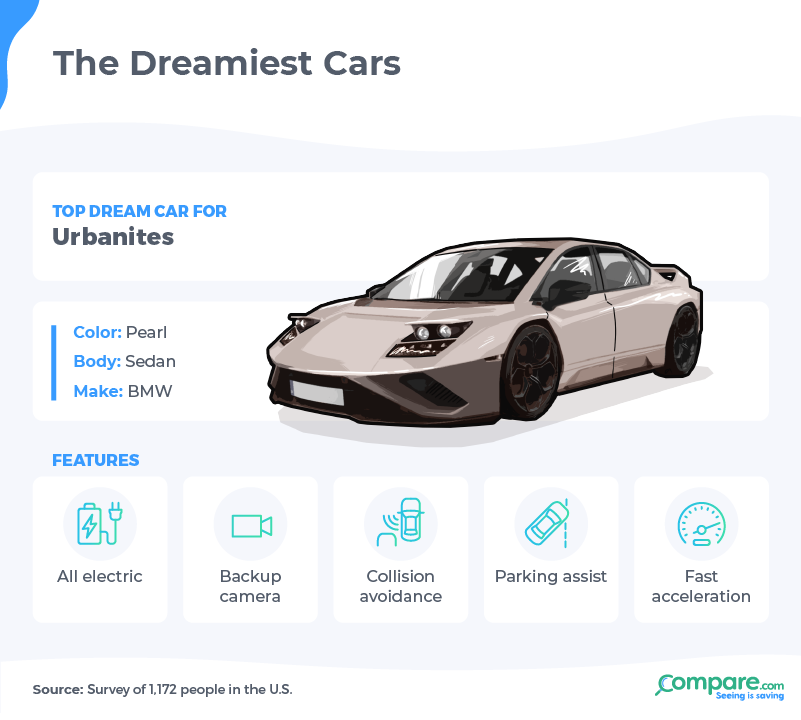 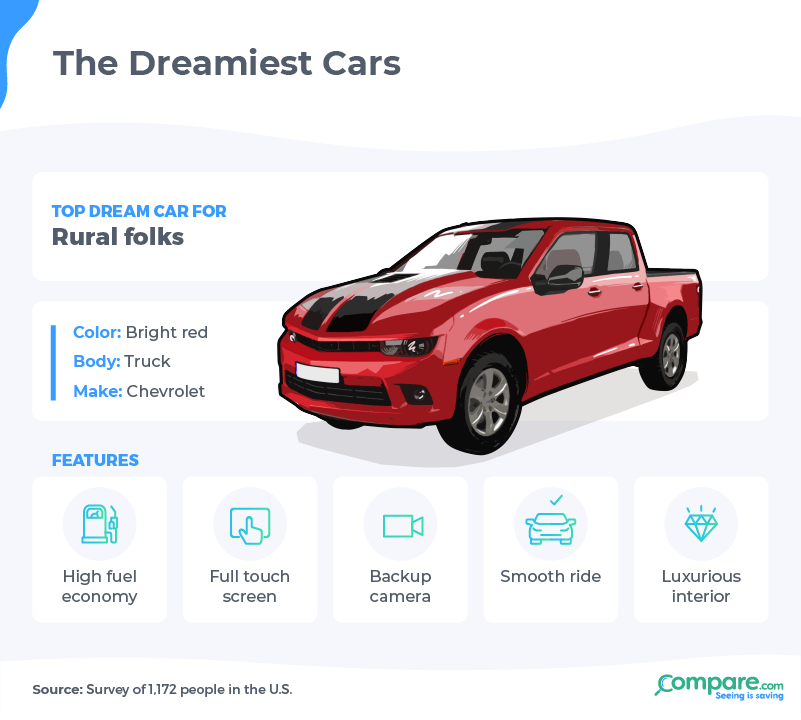 Many people are interested in owning an all-electric vehicle and want a backup camera and full touch-screen capabilities as well. Other desirable car features varied depending on where a person lived. For example, city dwellers dreamed of a car with collision avoidance and parking assist, while rural Americans were more concerned with fuel efficiency and a smooth ride.

Making the Dream a Reality

Almost 4 in 10 Americans were ready to purchase their dream car in the near future, although those who consider themselves car enthusiasts were much more likely to pull the trigger. Sixty-five percent of car aficionados reported being ready to jump into their dream driver’s seat, while only 25% of regular car owners reported feeling the same.

Drivers with longer commutes were also much more ready to make a purchase, which makes sense considering how much time they spend in their vehicle each day. Our results show that the longer a person’s commute, the more likely they were to buy their dream car soon.

Some dream cars can lead to higher expenses for things like maintenance, parts, and fuel. The cost of your car insurance policy may also increase depending on the type of vehicle you dream of owning versus the one you currently drive.

Sports cars are notoriously more expensive to insure than other types of vehicles. Because of their value and flashy appeal, they have a higher risk of being stolen. They’re also notably more dangerous to drive because of higher speed capabilities, smaller bodies, and lack of safety features in vintage models. Parts for sports cars can be costly to replace, too.

Are people willing to pay more for a vehicle that ticks all their boxes? According to our survey, the answer is yes: 62% of Americans were willing to spend an extra $50 or more per month on car insurance for a dream car.

An Outlook on Fuel Efficiency and Technology

To wrap up our study, we asked people how they felt about dream cars of the future. As a result, we found some interesting trends among different generations of Americans when it came to which tech features and power type mattered most. 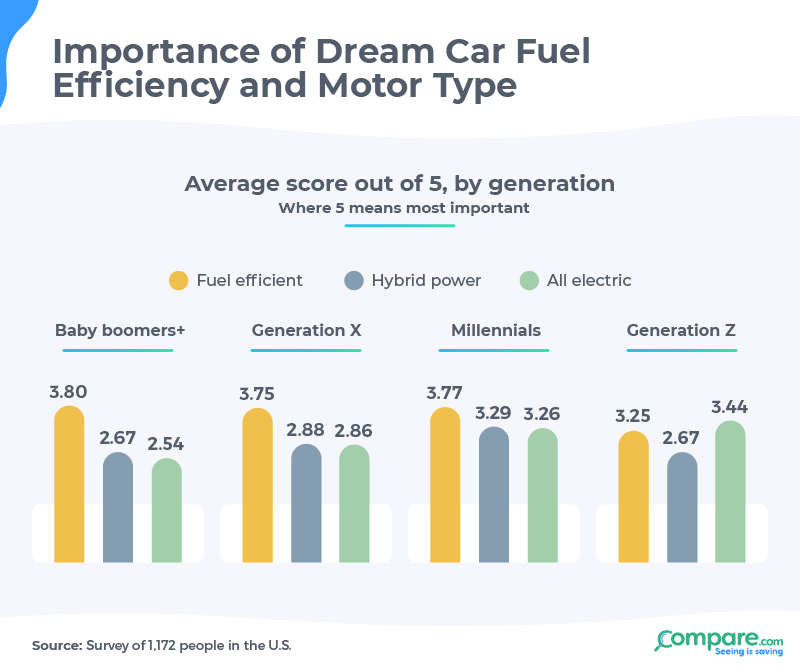 Our oldest respondents were also the most concerned about purchasing a dream car with high fuel efficiency. Perhaps this is because younger generations (and particularly Gen Zers) were significantly more interested in electric cars rather than gas-powered or hybrid vehicles.

As for the importance of automotive technologies, baby boomers were the least interested in their dream car’s tech features. We also determined that people are generally not looking for self-driving cars, since Americans across the board valued self-driving technology the least. People are currently more interested in parking assist or having a full touch screen on their dashboard.

When it comes to their dream car, Americans want more comfort and quality from the inside out. A smooth ride in a nice vehicle that handles well is worth a lot to most people, and they’re willing to pay extra per month to own and protect it.

Compare.com provides drivers of all ages with multiple ways to save on car insurance — helping drivers save money and time by instantly providing comparison quotes from multiple insurance companies, which could help some Americans better afford their dream cars.

We collected 1,172 responses from people in the U.S. via Amazon Mechanical Turk. 56% of our participants identified as men, 43% identified as women, and roughly 1% identified as nonbinary or nonconforming. Participants ranged in age from 18 to 80 with a mean of 39 and a standard deviation of 11.9. Those who failed an attention-check question were disqualified.

Information from this study about what makes a dream car can be shared for any noncommercial use. We just ask that you link back to this page as credit to our team of creative analysts.