Home Auto Insurance Resources How Are Americans Feeling About Their Commute These Days?

How Are Americans Feeling About Their Commute These Days?

Thinking back to a time before March 2020, sitting in rush hour traffic and sprinting to catch the subway were regular aspects of the working world. The idea of hybrid or fully remote working was a less common concept, so many employees were expected to make their way into the office each day. However, the onset of the pandemic forced employers to consider alternate methods, impacting employees’ overall commuting habits.

We surveyed over 1,000 employees across the country to dig deep and uncover trends surrounding those habits, including the specific impact of the pandemic on daily travel, positive and negative aspects of a daily commute, and the potential of leaving an employer due to the required commute time.

Commuting Trends Amid the COVID-19 Pandemic

How has COVID-19 influenced the average American’s daily commute? To answer this question, we first explored the major differences workers have experienced between their pre-pandemic and current commutes. Many reported seeing a surge in distracted drivers – specifically increased cell phone usage in the car. As Americans continue to navigate the current pandemic environment, one in three drivers observed an increase in road rage while making their way to work via car. The COVID-19 pandemic has shaped America’s commuting habits. 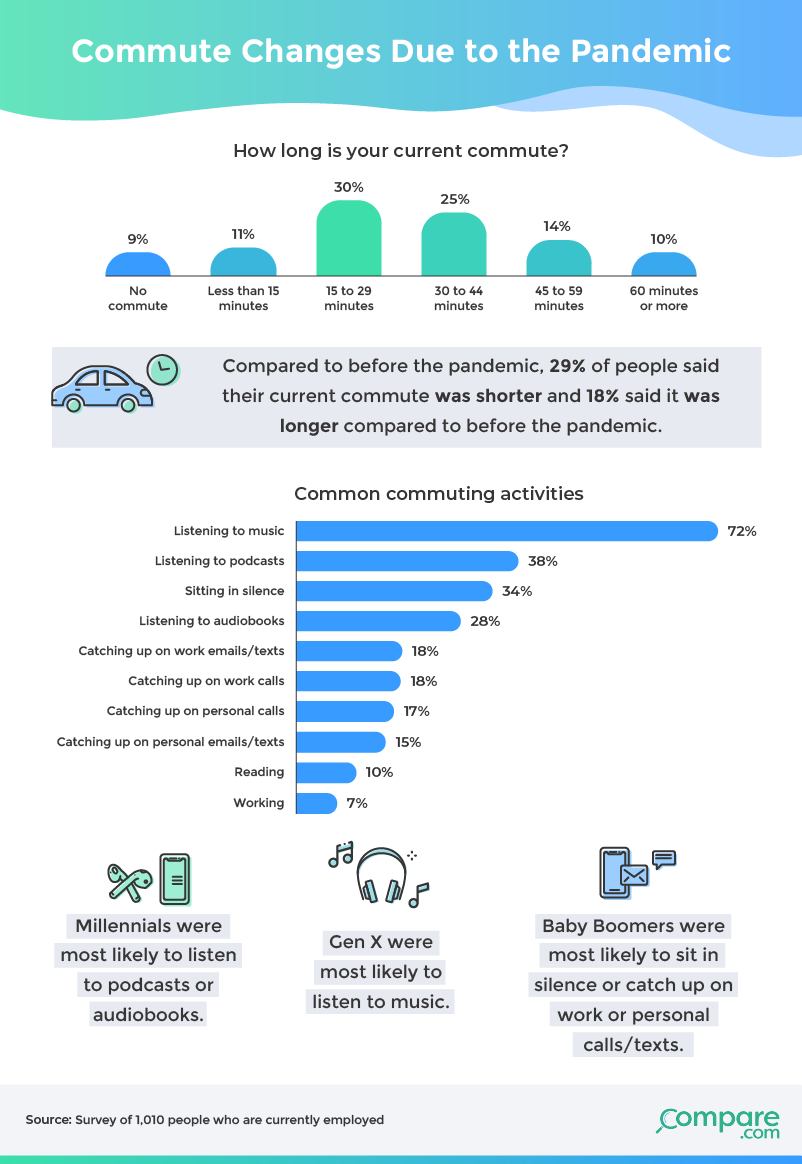 With the onset of COVID-19, many employees began working from home more frequently. Our research investigated the resulting effects of this change, including its impact on job satisfaction and work-life balance. 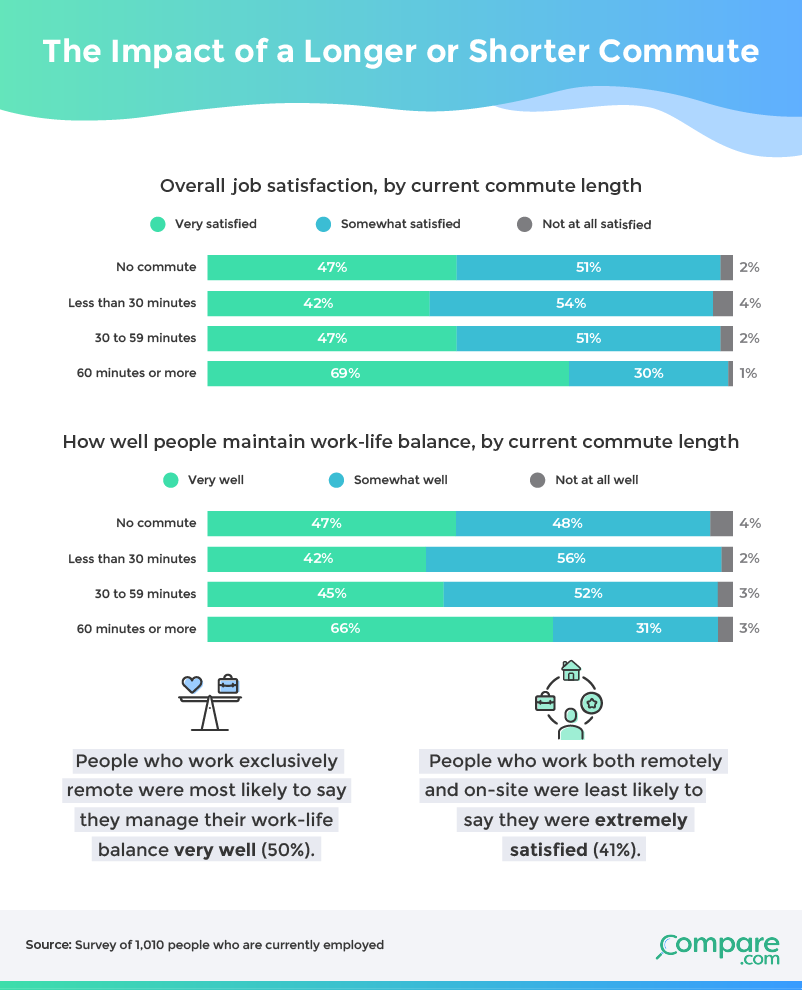 Among employees who have enjoyed a shorter commute since the pandemic hit, many reported surprisingly mixed emotions. More than half rated their overall job fulfilment as moderate or only slightly satisfied, at 33% and 23% respectively. Conversely, the overwhelming majority of employees with a longer commute compared to last year shared a positive reaction, with 39% declaring they were very satisfied and 19% extremely satisfied at work. This daily ritual often sets employees up for a similar successful routine each day, allowing for improved purpose and preparation.

With more time spent working in a fully remote or hybrid environment, one might automatically assume a correlation between shorter commute times and improved work-life balance. However, our research showed that the opposite was true. Among those with a longer commute since the arrival of COVID-19, most described an improved work-life balance, with over 60% reporting an improved ability to effectively juggle both home and work. At the other end of the spectrum, approximately a quarter of those surveyed revealed the unexpected – a shorter commute time negatively impacted their work-life balance.

Of those who spent their mornings traveling into the office, over half shared that their daily commute was a positive component of their workday, while only 1 in 5 considered it to be a negative part of the day. 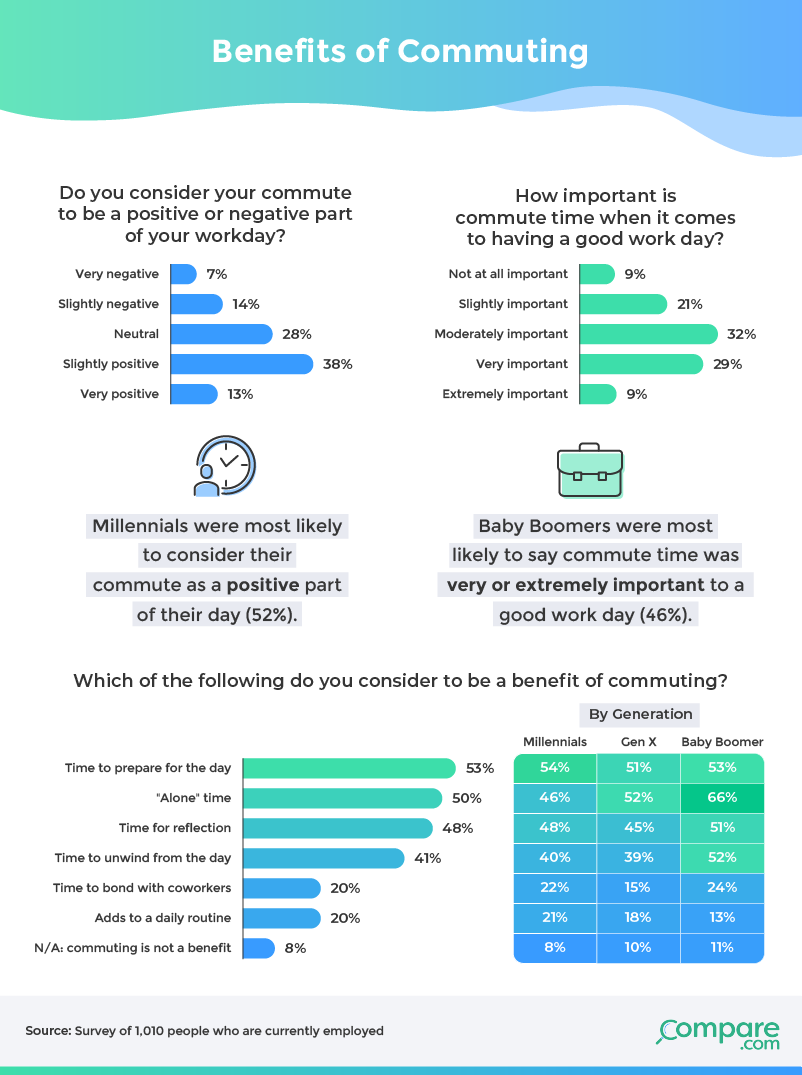 Similarly, more than half of respondents agreed that a commute is an important part of an effective workday. Most respondents (53%) said travel time was an opportunity to prepare for the workday ahead. Many also considered their commute to be the perfect chance to enjoy some time alone, as well as a few moments of self-reflection. Baby Boomers were more likely to utilize their daily commute for introspection and alone time, whereas Millennials were more likely to prepare for the day ahead.

Are You Currently Hiring?

While some employees who commute each day might enjoy their time in transit, others might feel differently. One in five workers said that they were very or extremely likely to seek out a different employer due to the required commute. 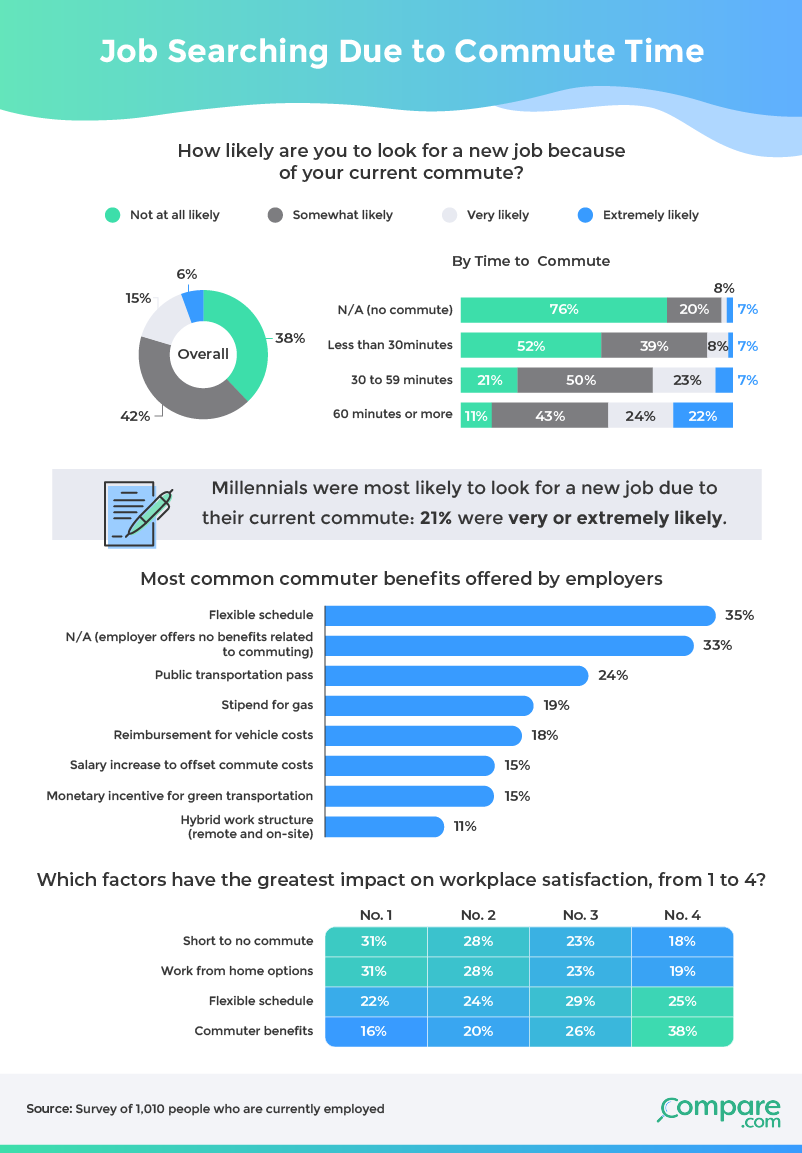 Specifically, those with shorter commutes were significantly less likely to consider changing jobs. The largest segment of respondents who were most inclined to look for a new job (22%) commuted for an hour or more.

As employees ramp back up to in-office work, it is important to consider the commuter benefits offered up by companies. To avoid the frantic rush through the door after bumper-to-bumper traffic, 35% of employers offered flexible scheduling for commuters, however, the second most common response was that no benefits are offered whatsoever. Even if one’s employer does not offer perks for commuters, changing careers or job locations can still result in financial benefits – specifically, decreased auto insurance rates.

While 31% of respondents confirmed that either a minimal commute or the ability to work remotely contributed most to an ideal work environment, the ability to be flexible also stood out as a vital component of employment.

The Future of Our Commutes

As the data from this study demonstrates, a daily commute can come with a vast array of benefits. Since many employees shared that longer commute times improved feelings of job satisfaction and work-life balance, it is expected that folks are looking to return to a state of pre-pandemic normalcy.

As companies across the country continue to move forward through these unprecedented times, it is essential to consider employees’ needs as they relate to commuting. Supporting flexibility when it comes to work style and schedules is an effective start, and if you are an employee, we encourage you to identify which aspects of the commuting process are most beneficial to you. You can also share these findings with your employer, thus giving them new ideas regarding how to most effectively support your needs as you travel to work each day.

We collected 1,010 responses of employed Americans from Amazon Mechanical Turk. 59% of our participants identified as men, 40% identified as women, and roughly 1% identified as nonbinary or nonconforming. Participants ranged in age from 20 to 71 with a mean of 38 and a standard deviation of 11.2. Those who reported no current employment or who failed an attention-check question were disqualified.

As the world’s working population steers through the ever-changing environment between in-office and remote employment, we are confident that you will find this data helpful and informative. We encourage you to share these insights with your team at the office, as well as friends and family who may also commute as part of their daily routine. You are welcome to share these results for noncommercial use, and we simply ask that you link back to this article.