Home Auto Insurance Resources The Most Popular Cars in Music Videos, by Genre

The Most Popular Cars in Music Videos, by Genre

Popular music has been synonymous with cars since the advent of motor vehicles. The Beach Boys sang about them, and modern country music has built an empire off of telling stories that involve pickup trucks. Since music videos were introduced in the early 1980s, cars have been a major part of the visual aspects of promoting a song – Whitesnake’s “Here I Go Again” is just one example of an 80s classic with a memorable car scene. Hip-hop music also made cars a big part of its aesthetic, especially in the ’90s and onward, and the music video obsession with flashy cars remains prominent throughout many different genres today.

If you’ve ever been curious about what makes, models, and colors of cars have been most prominently featured in music videos over the years, wonder no more. We watched 250 music videos from rock, hip-hop, country, EDM, and pop artists to find out which cars were most popular in those genres; which artists are most obsessed with cars; and what videos featured the most rides. Let’s get rolling! 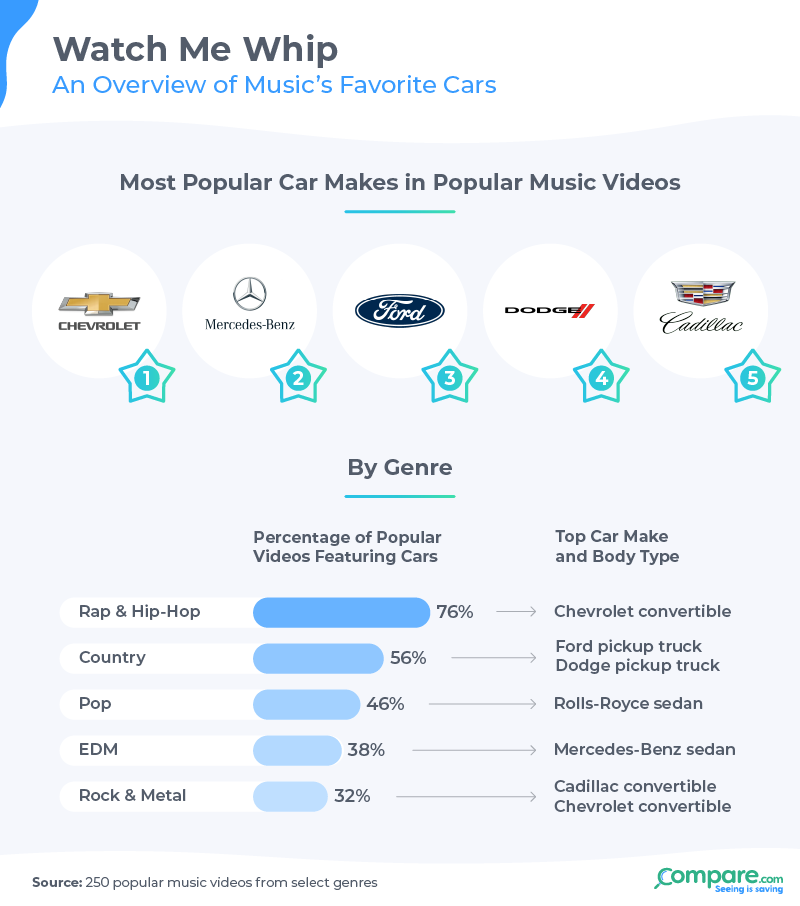 Notably, just 32% of rock music videos featured cars, the lowest percentage of all the genres observed, and Cadillacs and Chevy convertibles were the most prominently featured in those videos.

EDM music, interestingly, had the highest number of muscle cars of all genres analyzed and was right behind rap and hip-hop videos in the number of SUVs featured.

Breaking it down by genre, country music certainly had some interesting results when it comes to the prominence of cars in its videos. As mentioned earlier, Ford and Dodge pickup trucks were featured the most in country videos; in fact, there was a tie between the two. The top two car colors in country music were black and red, while black was found to be the most prominent vehicle color overall among the genres. 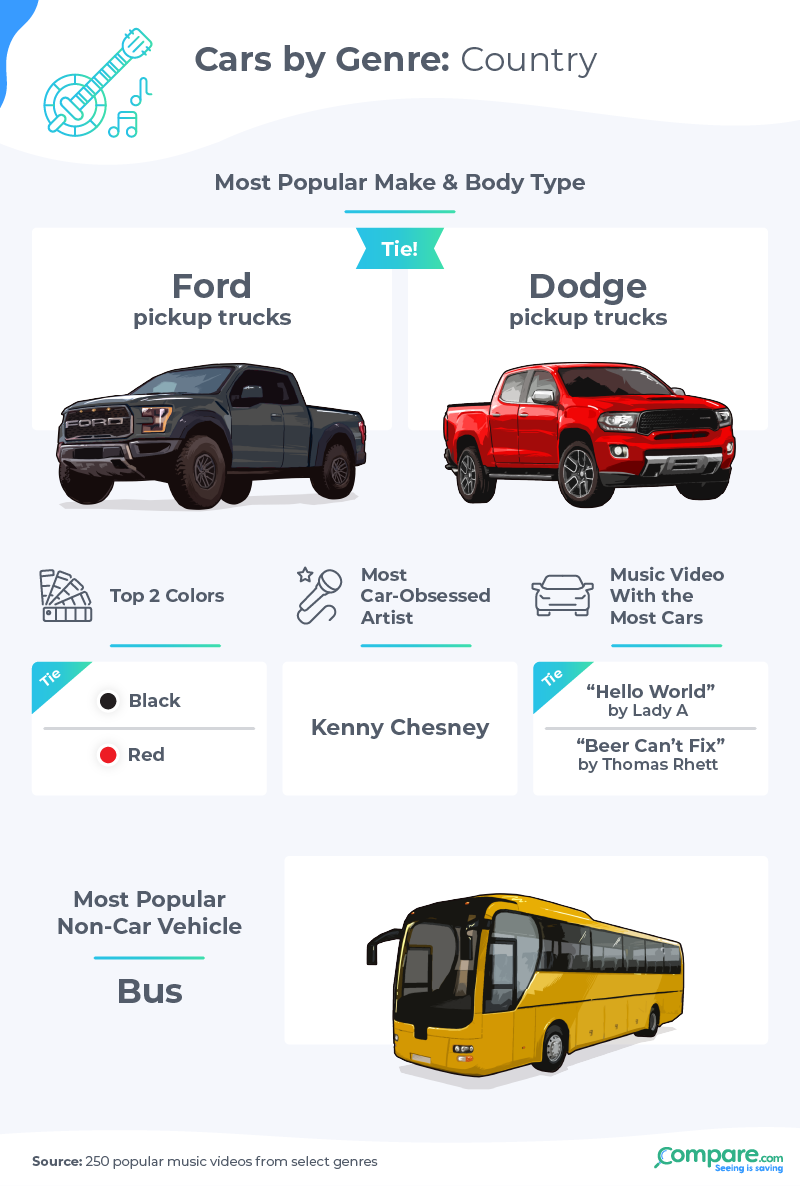 Kenny Chesney holds the title for most car-obsessed artist in the country music genre (meaning he had the most videos that featured cars in them), though he didn’t end up grabbing the coveted top spot for video with the most cars – that was a tie between Lady A’s “Hello World” and Thomas Rhett’s “Beer Can’t Fix”. 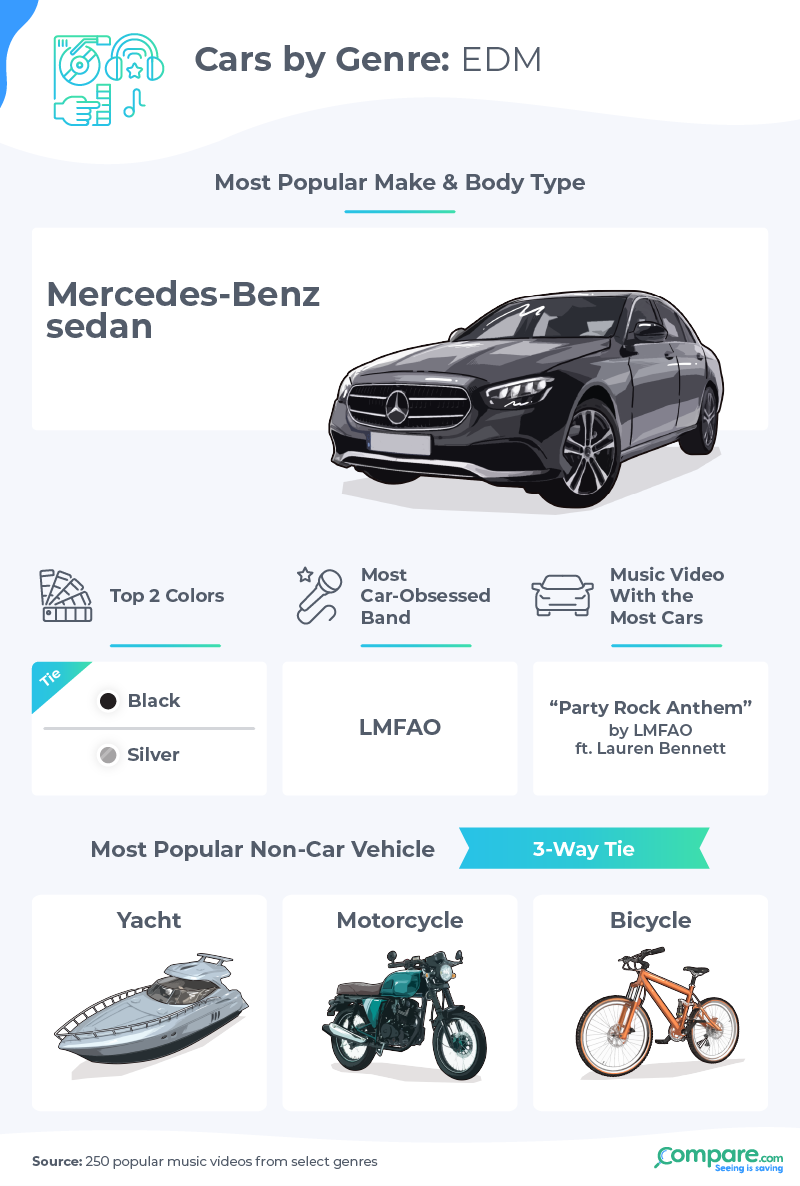 Among EDM videos, the most popular make and type among videos with cars was a Mercedes-Benz sedan, with black and silver being the top two colors. The artist with the most cars featured in their videos total was LMFAO, and that group’s smash hit “Party Rock Anthem” was the video in the EDM genre showcasing the most cars. Most notably, “Party Rock Anthem” totally overshadowed every other EDM video analyzed when it came to how many cars were featured.

Pop music videos most prominently featured Rolls-Royce sedans, with black and yellow being the top two colors. There was a tie between not two but three artists as the most “car obsessed” – Ed Sheeran, Psy, and Maroon 5 all had the most cars featured among all of the artists. There was also a tie for the pop video with the most cars, between Psy’s “Gangnam Style” and Maroon 5’s “Sugar.” 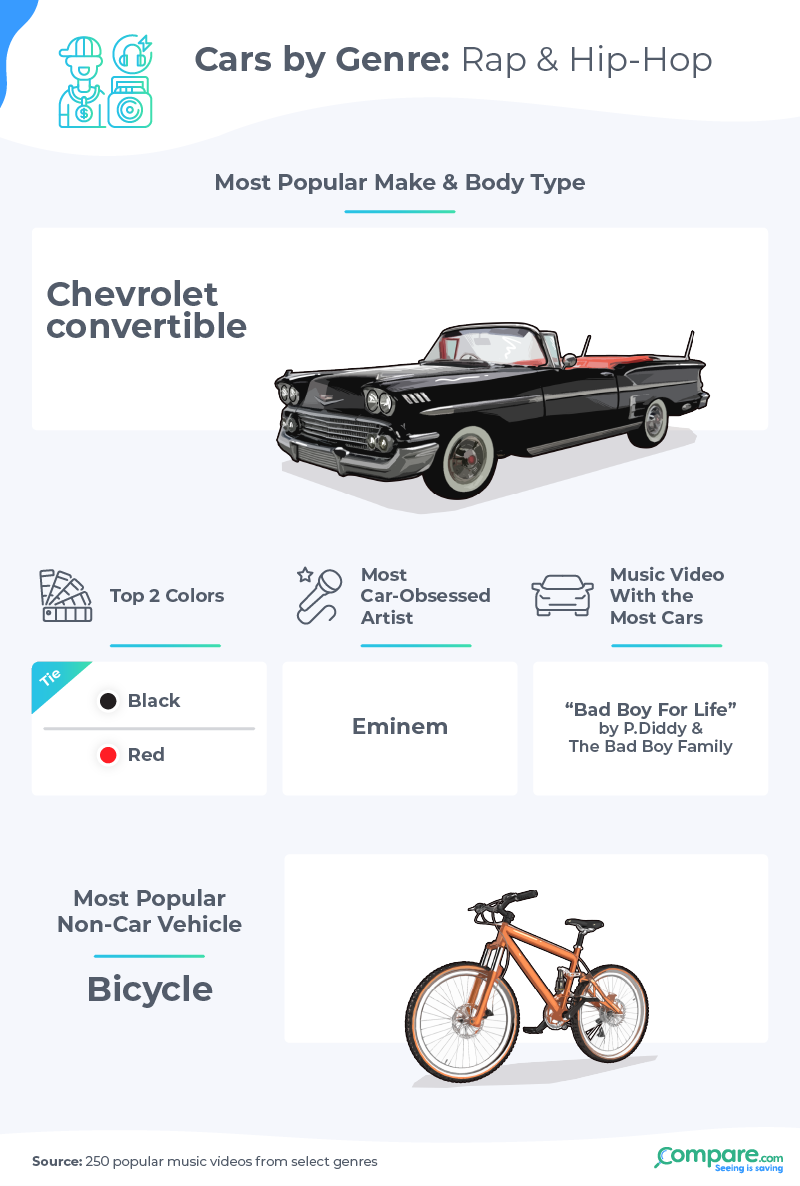 In the rap and hip-hop genre, the most popular car was a Chevy convertible, and black and red were the top two car colors featured in videos. The artist with the most cars in its videos was Eminem, though the title of video with the most cars went to P. Diddy & the Bad Boy Family’s “Bad Boy 4 Life”. 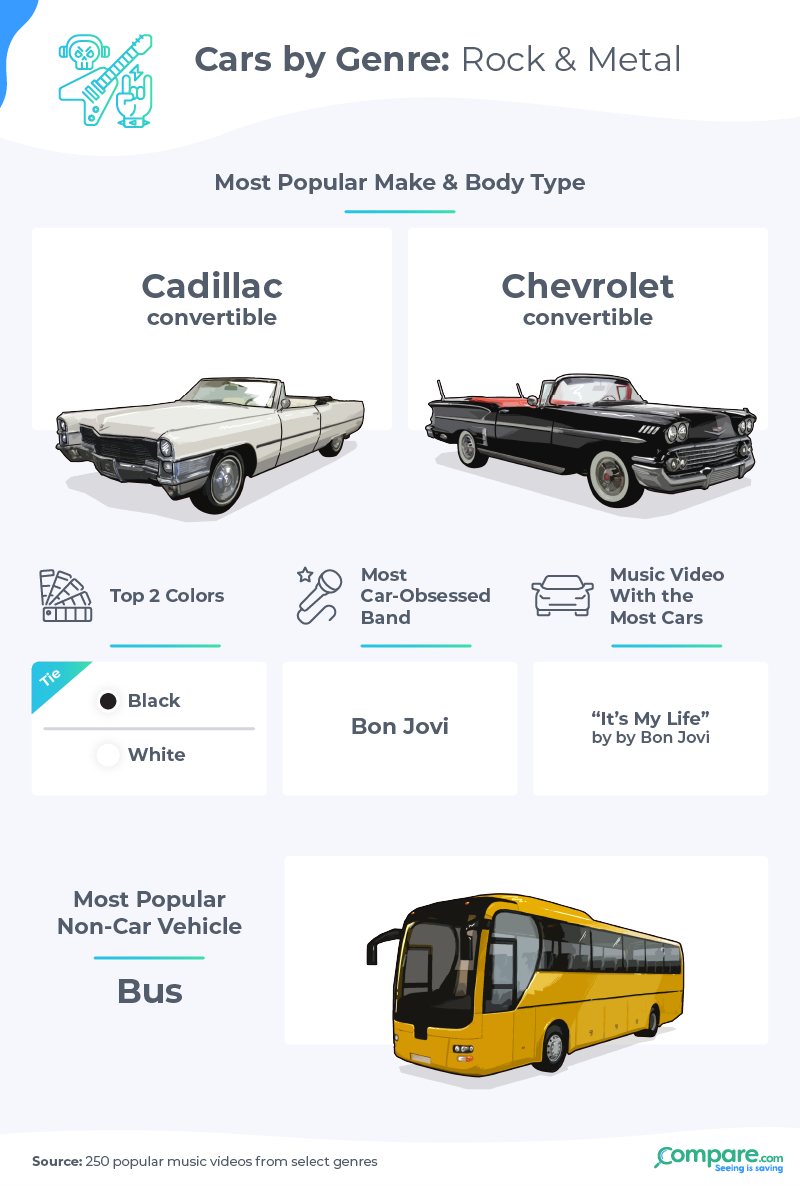 Finally, in the rock and metal genre, the most popular make and body type was a tie between Cadillac and Chevy convertibles, and the top two colors were black and white. Bon Jovi had the most videos with cars, and their “It’s My Life” video had the most cars in the genres.

Cars for Each Genre

Comparing music videos and genres, it certainly seems like cars have become a key part of popular music over the last couple of decades. Whether it’s a Chevy, a Ford pickup, or a Mercedes-Benz, music fans of all kinds undoubtedly associate cars with their favorite songs and videos. This is thanks in part to the large number of hip-hop and country music videos that feature different kinds of cars (especially the 76% of hip-hop videos that have various whips in them).

If you’re looking to take inspiration from these music videos next time you go car hunting, remember: No matter what you’re driving, parking in your driveway, or flaunting in music videos, having excellent and affordable car insurance has never been more important. Hidden costs can stack up quickly, so be sure to put in the requisite effort to find a great deal before settling on an option.

To analyze the use of cars in music videos across a range of genres, we identified 50 popular music videos in each genre by pulling from sources including lists from Ranker, popular YouTube playlists, and lists of top music videos from publications such as Loudwire, Rolling Stone, and CMT.

Having synthesized a compendium of 250 popular music videos, we then watched each one and manually coded appearances of cars, trucks, and other vehicles. We tracked the vehicle’s type, make (if apparent), and primary color. The primary limitation for this project was sample size; although 250 videos is a healthy sample, greater insights could result from a larger set.

If you’re a music video lover, vehicle enthusiast, or just a casual browser, we are confident that you will find this data entertaining and informative. You are welcome to share these results for noncommercial use, and we simply ask that you link back to this article.