Did you know the average American spends over five hours a day on their smartphone? According to a recent study on smartphone usage, the average user checks their phone over 60 times a day. Obsessive phone use leads to behavioral addiction due in part to the high it creates in the reward center of the brain.

Phone addiction can lead to sleep loss, mental health issues, and risky behavior, such as texting while driving. We know that people have a problem with phones and driving thanks to prior reports, but we wanted to better understand those who self-identify as phone addicts. How do they really think and behave behind the wheel on a daily basis?

Our new study determined the addiction level of over 1,000 drivers in the U.S. and explored the effects of smartphone usage on driving habits. We hope these results bring more awareness to the issue and encourage safer phone use and driving. Here’s a look at our top findings.

According to our research, more than 1 in 4 respondents felt very addicted to their smartphones, and the younger they were, the more they used their phone and the more addicted they felt. Only 24% of baby boomers said they use their phone for five or more hours each day, compared to 42% of millennials. Also, 91% of millennials felt moderately to very addicted to their phones, while 75% of baby boomers felt the same. Many Americans using their phones for five or more hours a day appeared aware that it’s a problem.

Overall, around 60% of respondents felt moderately addicted to their smartphone. They knew they sometimes spend too much time on their phone, but believed it hasn’t yet become a full-blown addiction. A previous study of college-aged young adults determined that certain factors, such as psychological and emotional issues, increase the chances of technology addiction.

If you find yourself struggling with phone addiction and mental health issues, you’re not alone. Learn more about these issues and how to reach out for addiction help today.

Our study delved into how often Americans drive and how they use their phones while driving on a daily basis. 70% of our respondents spent less than 45 minutes in the car each day. The youngest drivers spent the most time in the car, with around 42% of Gen Zers driving 45+ minutes each day. Urban residents also spent more time driving than suburban and rural drivers. 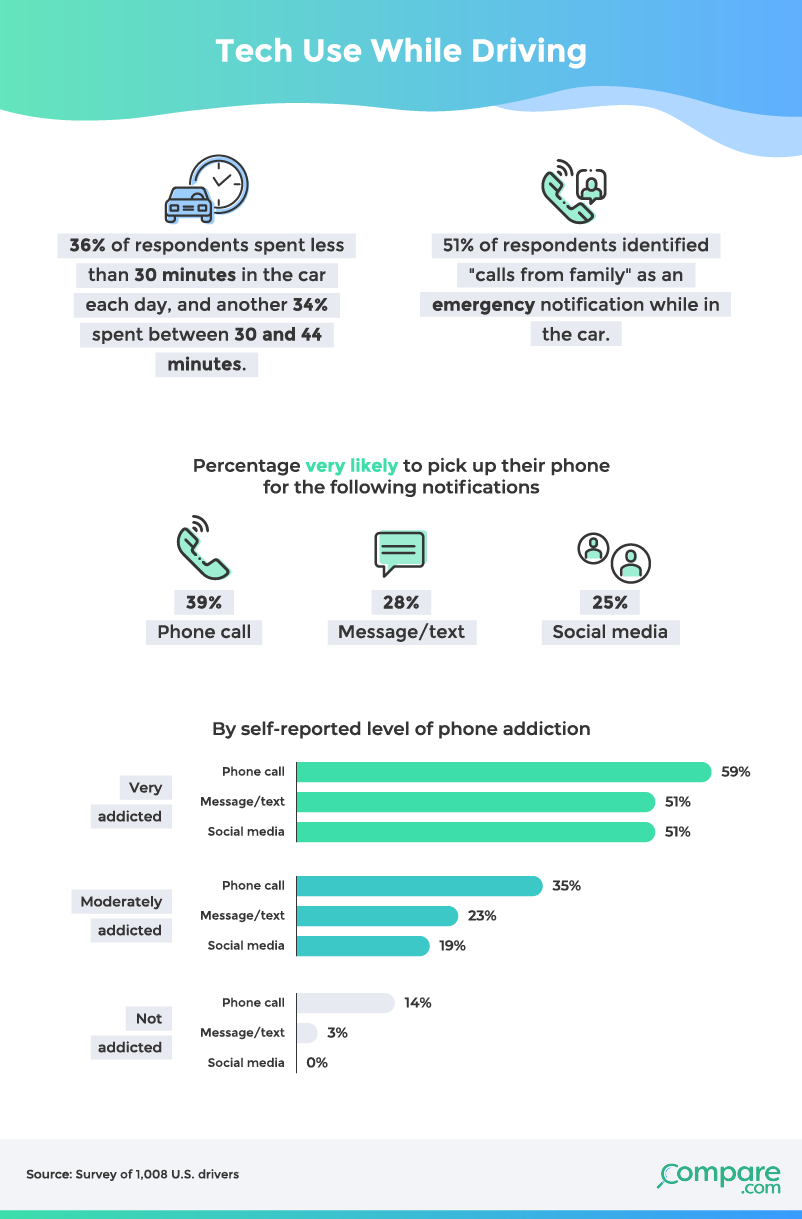 Respondents agreed that the top three reasons for very frequent phone use while driving were streaming music, using maps and navigation features, and listening to podcasts or the radio. Americans who identified as very addicted to smartphones were much more likely to use their phones for all purposes while driving. From making phone calls to playing games, this group was always around 10% to 30% more likely to be on their phones than other groups. 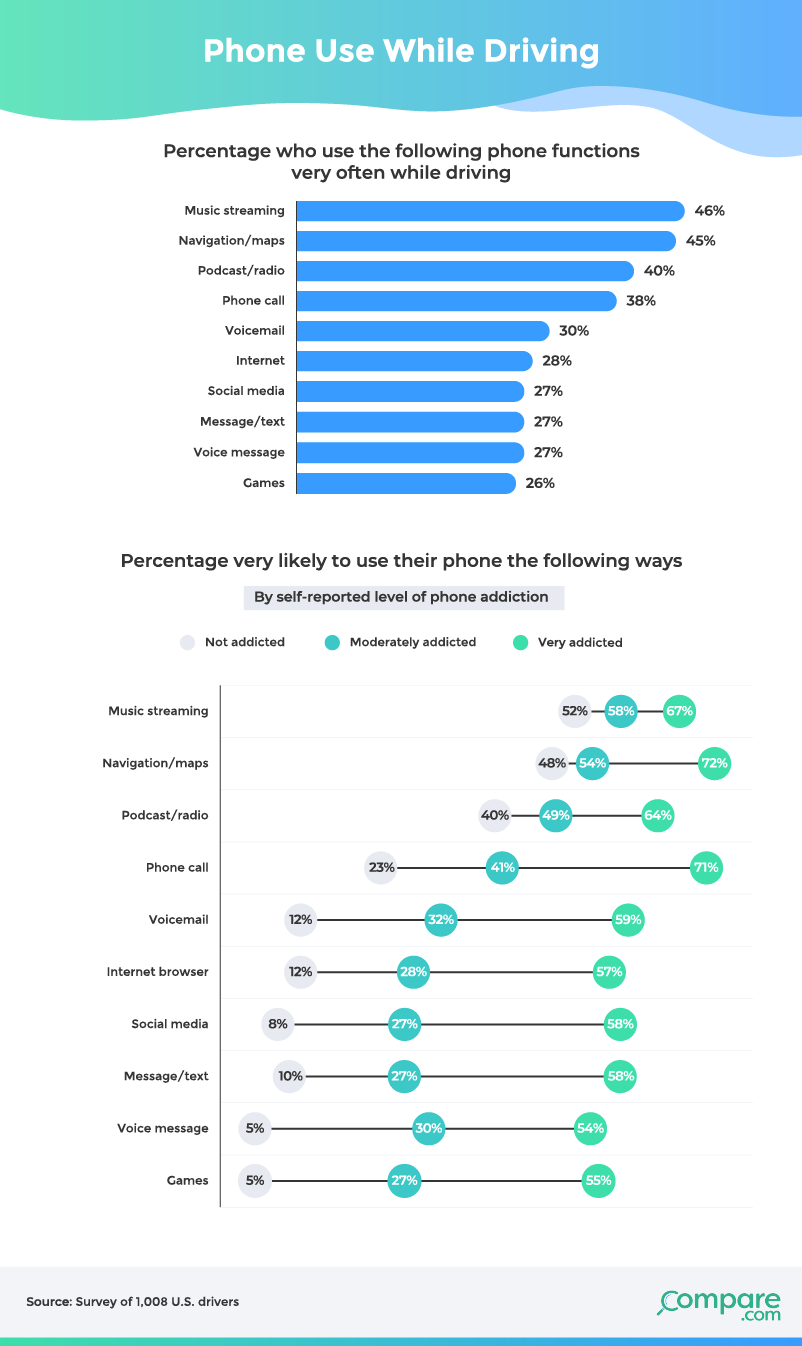 Research suggests that dopamine increases in your body after using social media. Your brain then associates these apps with pleasure and encourages you to repeat the behavior so you can experience these feelings again. FOMO, or the fear of missing out, is another reason why many people have trouble ignoring social media.

The truth is out. About 20% of phone addicts admitted they are unlikely to wear a seat belt. And while our survey made sure to be as neutral as possible when presenting questions, taking into consideration response options, question order, and potential biases and priming effects, this number may actually be even higher due to the nature of self-reporting and social desirability bias in surveys. 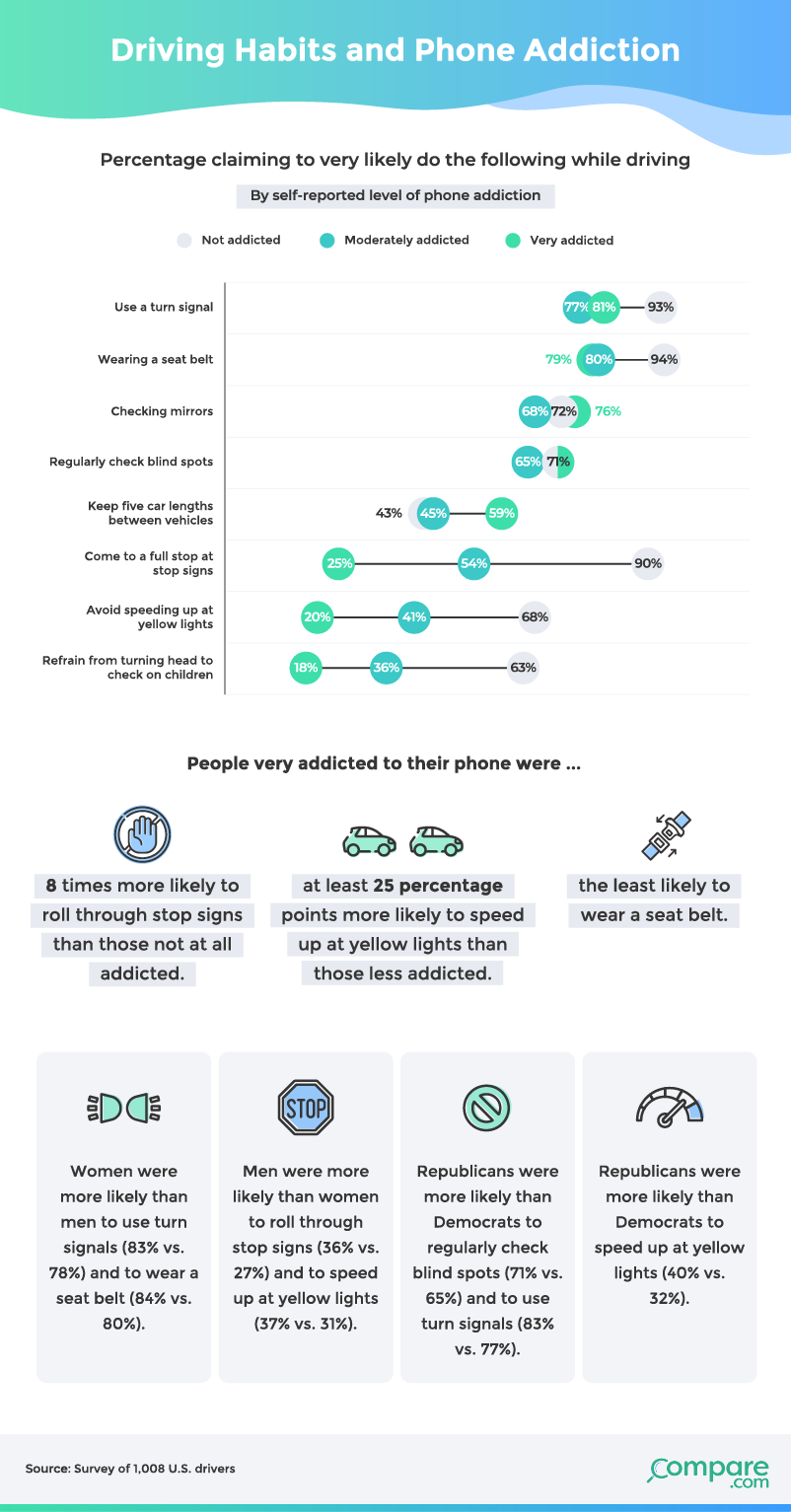 The very addicted were also over five times more likely to speed up at yellow lights and eight times more likely to roll through stop signs, according to our data. Another study on cellphone use while driving came to similar conclusions. They found that young adults, ranging in age from 18 to 24, who said they use phones while driving, also admitted to engaging in other risks. These risks included speeding, running red lights, and passing cars quickly on the right.

Road Rage on the Rise

Phone distractions plus risky driving behaviors are a recipe for disaster. Half of all very addicted smartphone users admitted to being involved in a distracted-driving accident, as shown below. Whether you’re a good driver seems to depend less on how old you are and more on how you use your phone while driving. There appeared to be a relationship between phone addiction and road rage, too. 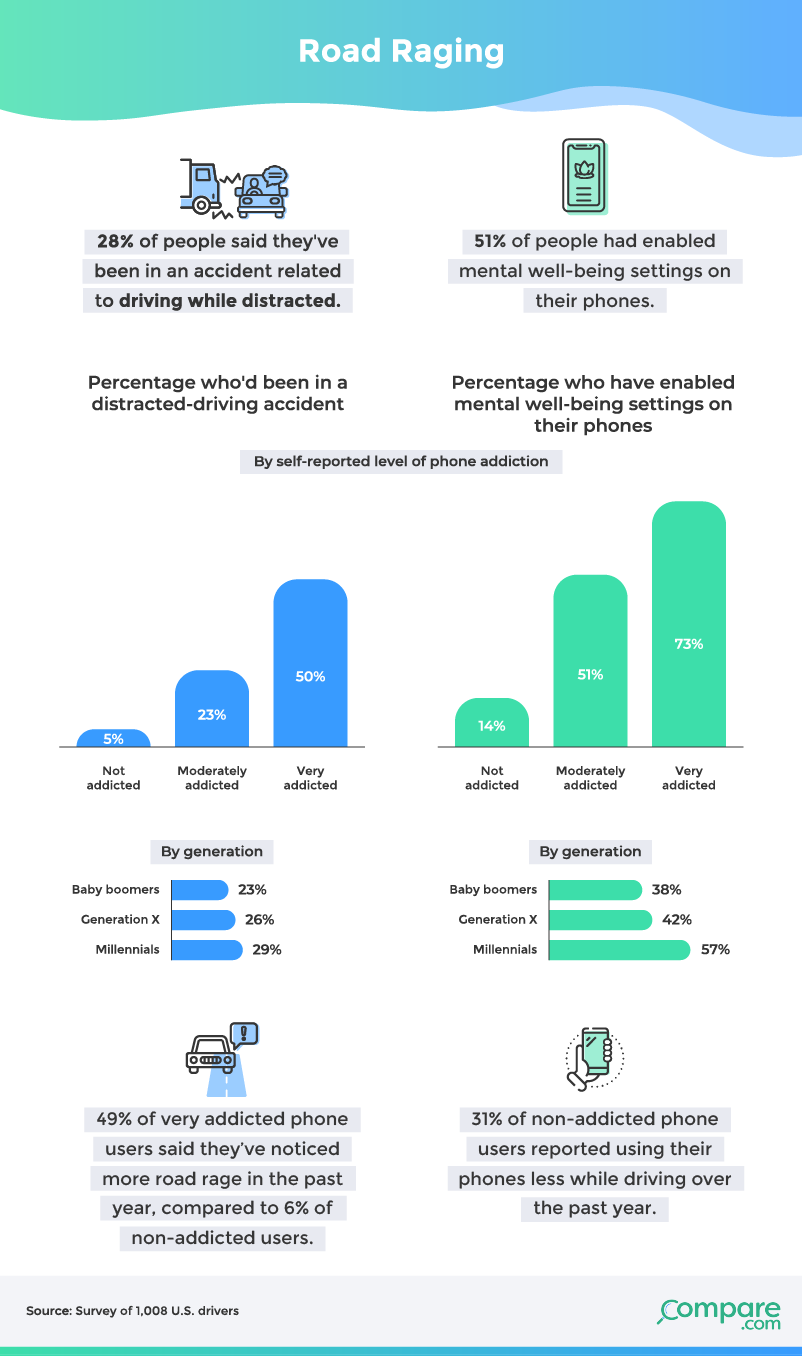 Driver phone usage increased by 17% during the pandemic, contributing to an overall rise in distracted driving. Studies show that being on social media delays a driver’s reaction time the most, followed by texting. Road rage incidents also went up this past year.

Almost 50% of phone addicts reported more road rage in the past 12 months, compared to just 6% of non-addicted users who said the same. Phone addicts also noticed they’ve been using their phones more often and have felt more distracted while driving.

Screen time reports and app limits are two tools that help smartphone owners better manage usage both on the road and at home. The good news is that the majority of phone addicts (73%) had enabled these well-being measures on their smartphones.

If checking your phone feels like an uncontrollable impulse while driving, try shutting the phone off or silencing it and placing it well out of reach (like in the trunk). Turning off notifications or turning on driving mode might also help you to cut down on driving distractions. You may also want to check out your app store for apps that encourage you to drive safer.

Make Smart Decisions to Protect Yourself

Smartphones are useful tools filled with spectacular technology, however, they’re a major source of distraction for many U.S. drivers. Phone addiction is a very real problem linked to behavioral, mental, and even physical issues. Those who risk using a phone while on the road also typically participate in other risky driving behaviors, often leading to dangerous and costly accidents.

Take steps to protect yourself and your vehicle. Set new limits on your phone if necessary and find the best car insurance with sites like Compare.com so that you’re covered if you get into a collision with a distracted driver on the roads.

We used Amazon Mechanical Turk to collect responses from 1,008 people in the U.S. who drive. 56% of our participants identified as men, and 44% identified as women. Participants ranged in age from 20 to 84 with a mean of 39 and a standard deviation of 12. Those who failed an attention-check question were disqualified.

In terms of generational breakdowns, 11.8% of respondents were baby boomers or older, 26.7% were Gen Xers, 59.6% were millennials, and 1.9% were Gen Zers. It is possible that with more Generation Z participants, in particular, we could have gained a more accurate insight into this population.

If you want to help your readers learn more about how phone addiction can affect driving habits, you can share the results of this study for any noncommercial use. We just ask that you link back to this page as credit to our team of creative analysts when doing so.