Study: Where Cars are Most Susceptible to Crime

During 2020, we saw a lot of headlines about increased car break-ins and attempted automobile thefts throughout America. To investigate this topic, we evaluated Open Data portals from major cities in the United States for last year.

For some cities, all data regarding vehicle theft and break-ins is freely available. Depending on where you live, you might even be able to get a detailed look at incident reports in a specific area. We took an in-depth look at these records, as well as metrics such as the times and days when these vehicle-related crimes occurred.

For 18 of the 25 largest cities in the U.S. where police data was readily accessible, we looked at the total number of motor vehicle incidents reported, as well as the number of incidents per 100,000 residents. These numbers include all incidents involving a vehicle, from auto theft to attempted theft and vehicle break-ins. 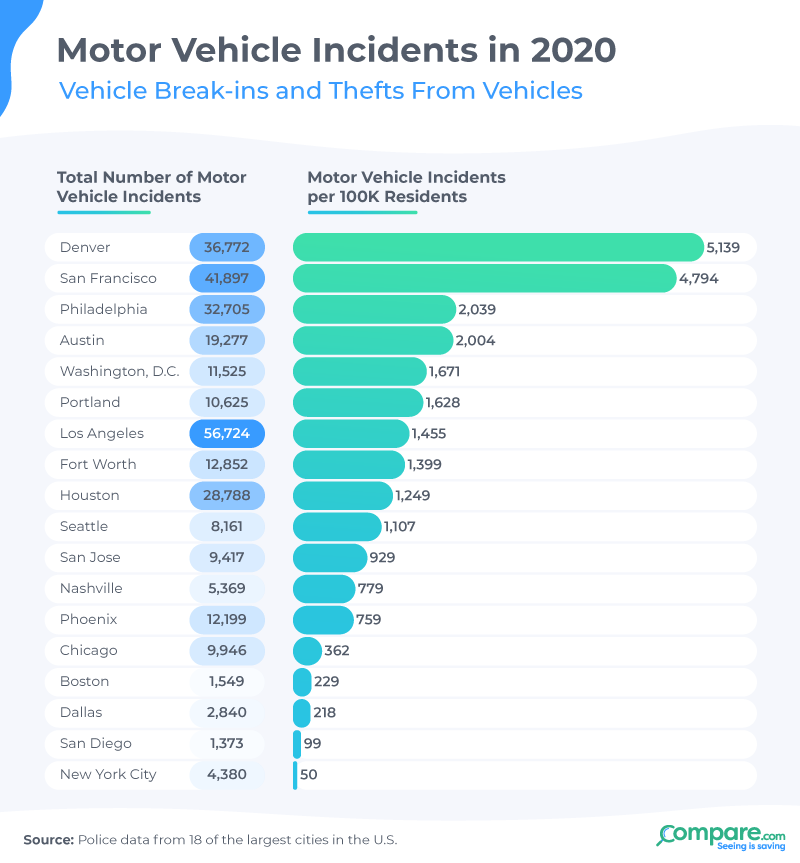 While there might be a wide range of factors for this increase, the media reported that the pandemic could be a contributing factor due to employment losses and difficult financial situations, but also because cars are being left unattended for longer or used less often.

When Are You Most at Risk?

Filtering incidents by the day of the week, the most occured on Monday and Friday. While the exact time each incident occurred is not available for all cities, looking at the available data for Los Angeles and Portland shows an interesting picture. The majority of thefts and break-ins happened during the evening between 5 and 10 p.m. In these two cities, the fewest incidents occurred between 2 and 6 a.m. 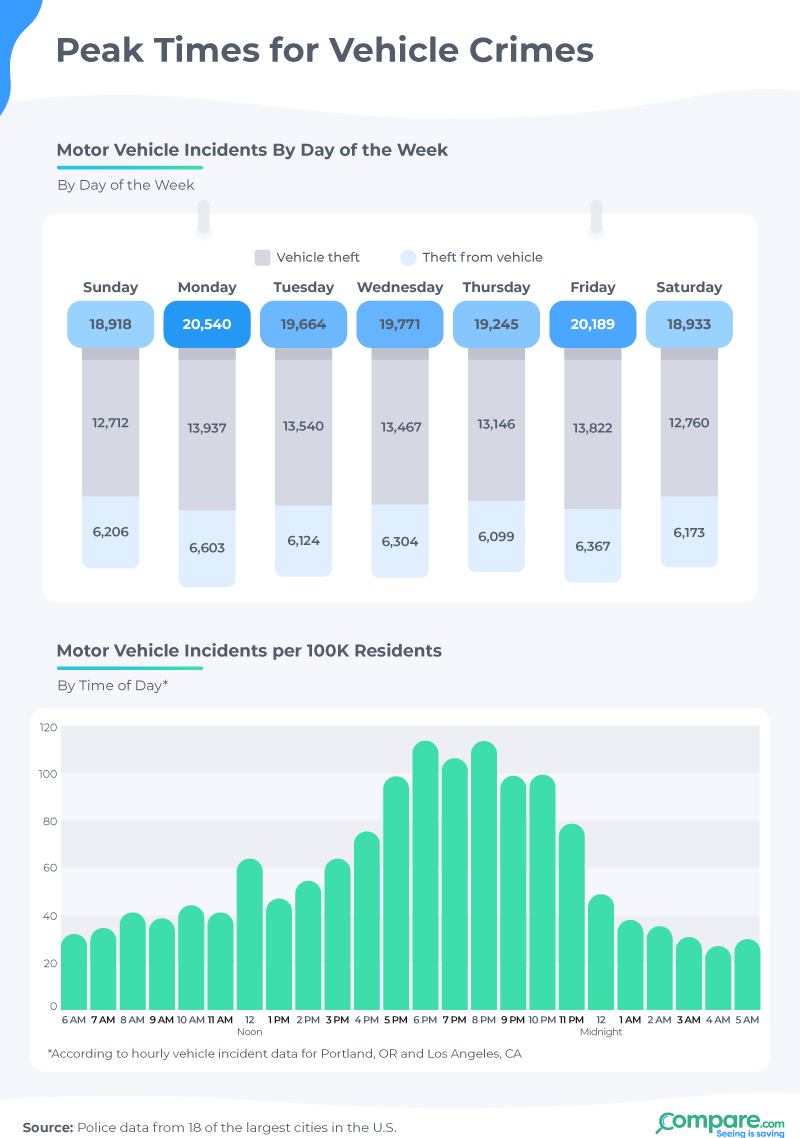 Again, this is specific to certain cities, and there might be variations in peak times and days depending on the area. While it is insufficient to define a pattern, darkness seems to increase the risk factor, especially in the first part of the night when offenders may be most active. One of the most common pieces of advice given by authorities for avoiding vehicle theft is to park in a well-lit area whenever possible.

To further assess whether there is a specific pattern for vehicle break-ins and thefts, we looked at the number of incidents per month. In 2020, breakdowns of monthly vehicle thefts and break-ins in America’s largest cities showed lower numbers from February to June, months when restrictions linked to the COVID-19 pandemic – such as shelter-in-place orders and nightly curfews – were more severe. 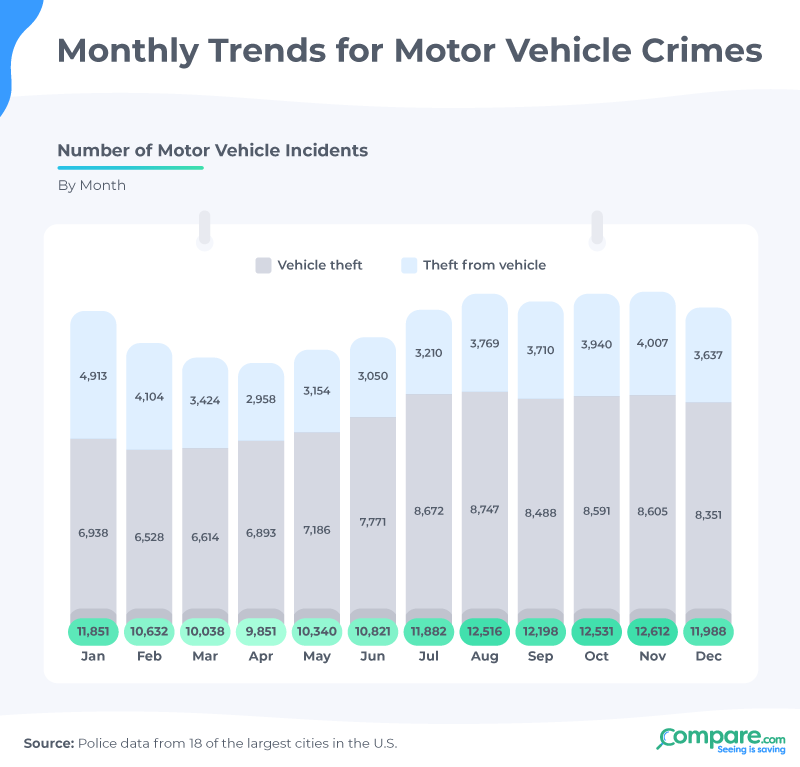 From July onwards, the numbers increased to over 11,000 incidents per month, with November 2020 being the month with the highest number of incidents. The split between the types of incidents is similar throughout the year, with between 60% and 73% being vehicle thefts and the rest being vehicle break-ins (whether to steal something inside the vehicle or as part of an attempted theft). While this data is a compilation of major cities, the statistics do vary from one area to another.

Having a more comprehensive auto insurance plan might well be worth it, given the numbers above. This is especially true because just as the numbers of thefts and break-ins have increased, car prices have also gone up a lot in the last year. So, if your car is stolen and not recovered, you are likely to incur a significant financial loss. Investing in additional insurance for your car might cost more, but there are ways to get a good deal while also getting a comprehensive coverage plan.

This data was compiled using U.S. city open data portals for 18 of the largest cities in the U.S. We evaluated data from vehicle theft and vehicle break-ins for 2020, the most recent year offering complete data from the most cities. Variables included in this analysis were normalized across each city to encompass any motor vehicle incident. Theft data was encoded as a range of city-specific identifiers, from “auto theft” to “motor vehicle theft” to “stolen vehicle.” Theft from a motor vehicle was coded as a range of city-specific identifiers from “burglary from vehicle” to “theft, from locked/unlocked vehicle” to “theft from auto.” Some limitations apply: not all cities had data available across variables used in this study.

Do you feel your area has had an increase in car break-ins? If you’d like to continue this conversation with your friends and family, feel free to send this article their way. We only ask that you do so for noncommercial use and provide a link back to the original page, so our contributors can earn credit for their work.