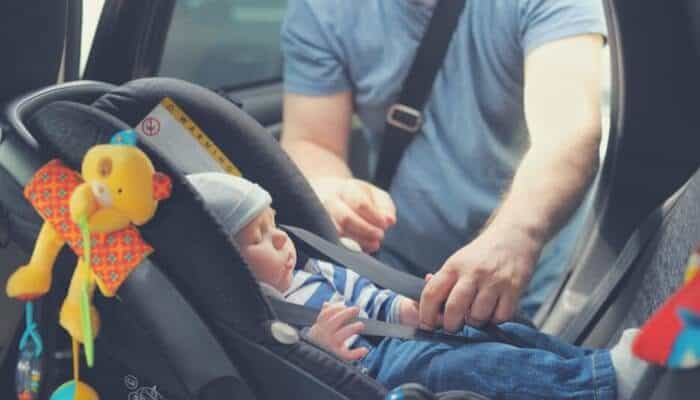 If you’ve done it before, you’ll know that installing a car seat can be one of the most stressful things you’ll do as a new parent. Made all the more stressful that there’s no way around it: there’s a good reason you’re doing it! Using a car seat reduces the risk of death to infants by 71% and to toddlers by 54%, according to the Centers for Disease Control and Prevention.

Installing a car seat is the law. But do you know the real ins and outs of California’s specific car seat laws? Before you cruise down Rodeo Drive, make sure you understand The Golden State’s rules. Here’s what you need to know to keep your kids safe and to abide by the law.

Who Should Have a Car Seat?

As of 2012, California car seat laws require all children under 8 who are shorter than 4 feet, 9 inches to ride in a car seat or booster seat in the back. There’s a good reason for this: In an accident, the risk of a child getting injured is reduced by 33 percent when riding in the back seat, according to the California Highway Patrol (CHP).

California’s laws also require children under one year old to ride in a rear-facing seat. Although, countless studies have shown that it’s safest to keep children rear-facing until at least age two. All children must wear seat belts until age 16, but we recommend wearing a seat belt whenever you’re in the car.

California car seat laws are stricter than many other states. The other states that generally require a child restraint for children up to age 8 (as opposed to 7 or younger) are Colorado, Georgia, Illinois, Kansas, Maine, Maryland, New Jersey, Oregon, Tennessee, Vermont, Washington and Wyoming.

When Should a Car Seat be in The Front?

What if you drive a pickup truck? Or a two-seater sports car? Or an older car without shoulder belts in the back? California car seat laws do include some exceptions for situations like these, allowing a child to ride in the front seat if:

It’s important to remember that a rear-facing car seat must never be placed in a front seat in a vehicle with airbags. The force of an airbag deploying in an accident can cause serious injuries to an infant. If you must place a rear-facing car seat in the front seat, only do so if your vehicle has a switch to deactivate the passenger-side air bag. This will help reduce further injury from the airbag.

What If You Have More Than Two Kids?

Safely installing a car seat is simple if you only have one child to worry about. But what if you have three? California car seat laws allow for exceptions if the back seat is fully occupied by children under 12. You’ll need to use your best judgment and place each child where he or she is safest.

The California Highway Patrol gives an example: what if a car only has lap belts in the back, and a driver needs to transport a 5-year-old in a booster seat, a 2-year-old in a forward-facing car seat and an infant in a rear-facing car seat? Because a booster seat must be used with a shoulder belt, the 5-year-old goes in the front seat. The younger children should ride in the back in properly secured car seats. Phew, got it?

Even though the law includes some exceptions for different situations, that doesn’t mean parents can disregard California’s car seat laws. If you’re caught driving while your children under 16 aren’t safely secured, you can be fined $100 for a first offense and $250 for subsequent offenses. Lower-income drivers may have to attend a car-seat education course in lieu of paying the fine.

Where Can I Get Help?

Despite manufacturers’ best efforts to make them easy to use, car seats are complicated. Installing a high-tech, super-safe car seat can borderline the stress you feel with self-assemble furniture. Infant seats, convertible seats, all-in-one seats, booster seats… they each have a specific way they must be installed to make them safe.

Some seats use a LATCH belt that attaches to anchors in the car, while others may be installed with a seat belt. A general rule of thumb is that the belt should be tight enough so you can’t move the car seat side-to-side or front-to-back more than 1 inch.

If you need help installing a seat, or you want an expert to make sure the seat is correctly installed, you can find a California car seat inspection station or visit your local police or fire station for advice. Many certified technicians, who are often firefighters, will take a look free of charge. Or, you can contact your local CHP office for a free lesson in car seat installation.

There’s one other way you can protect yourself and your children, and that’s by making sure you’re fully insured. Compare free car insurance quotes on Compare.com and ensure that your growing family are fully covered.