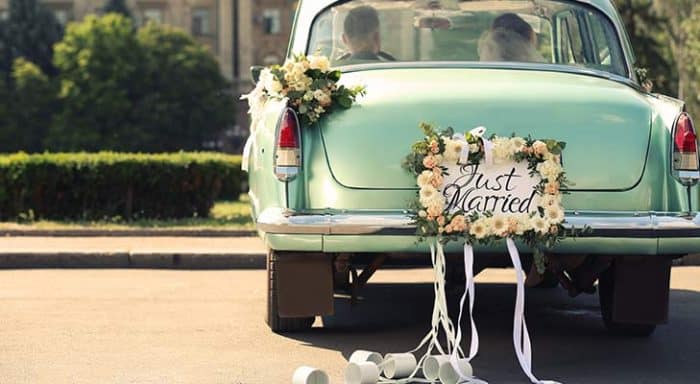 You’re getting married! Time to add all the essentials to the gift registry: an air fryer, an Instant Pot, an asparagus steamer and a new car insurance policy.

Hold up. That doesn’t sound very exciting (well, maybe a little more exciting than the asparagus steamer). But you really should shop for auto insurance as soon as you’re married. You’ll probably save a bucket of money — and Compare.com can help.

Do Spouses Have to Be on the Same Auto Insurance Policy?

No. There’s no part of the marriage vows that says “to have and to hold from this day forward, as long as we’re sharing our car insurance.” You can maintain separate policies, but if you’re living together, your insurance company will usually require spouses to be added to each other’s policies. That’s because if you’re living under the same roof, you’re probably driving each other’s cars, right?

As you can imagine, it gets expensive to maintain two separate auto policies with two drivers on each one. That’s why it’s smart to shift to a single policy for you both. But don’t just pick one of the policies you already have! This is a perfect opportunity to shop around and see which insurers can offer you the very best, cheapest quotes.

Do Spouses Automatically Save Money by Sharing an Auto Insurance Policy?

Good question! A marriage discount on car insurance isn’t guaranteed, but you have a good chance of saving money. Here’s why:

What If My Spouse Has a DUI, a Bad Driving Record or Bad Credit?

First, don’t panic. For better or for worse, right?

It’s true that you’ll pay more for auto insurance if you share a policy with someone who has a blemished driving record or poor credit. Surprisingly, credit history can be a bigger deal than driving history.

A major Consumer Reports study a few years back found that the average driver with bad credit pays $1,301 more for car insurance in a year. Some states prohibit the use of credit in setting insurance rates, however.

Comparing car insurance quotes becomes vitally important when one (or both) spouses has some dings on their record. Some insurance companies specialize in higher-risk drivers or SR-22 insurance. Comparing quotes side by side lets you see who offers the lowest rates.

Read more: How to Get Cheap Car Insurance with Bad Credit

For your first anniversary, the traditional gift is paper — so why not print out some auto insurance quotes? We’re kidding, of course (we don’t want your sweetie to smack you), but you really should keep comparing quotes as the years go by. As tickets and traffic violations drop off your record, and as you get older, your insurance rates should go down.

There’s another reason that you, as a couple, should keep checking quotes every year or so: a sneaky insurance practice called price optimization.

In many states, insurance companies are allowed to collect personal data about you to figure out how sensitive you are to price increases. If they think you won’t notice, then they’ll gradually hike up your insurance rates each year — for no real reason! To fight this practice, you have to shop around, and be willing to switch insurance companies when you find a better deal.

Compare.com is the easiest way to see how much you could save! It’s fast, it’s free, and our customers save an average of $720 a year on their car insurance.