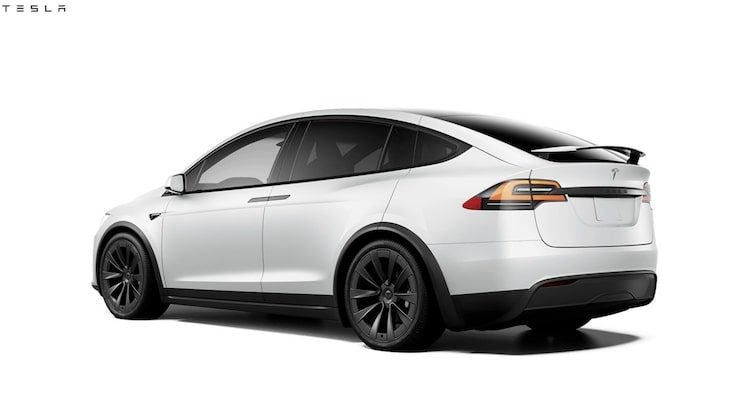 The electric vehicle market has seen a lot of change since Tesla became a leader in the class in 2012. Today, fear of running out of battery power and charging times are less of an issue, making EVs more viable as daily drivers.

For those who want a little more luxury from their EVs, Tesla and Audi offer several options. Audi has the e-tron and e-tron GT, while Tesla has the Model X and Model S. Find out how these models stack up in an Audi e-tron vs. Tesla head-to-head competition. 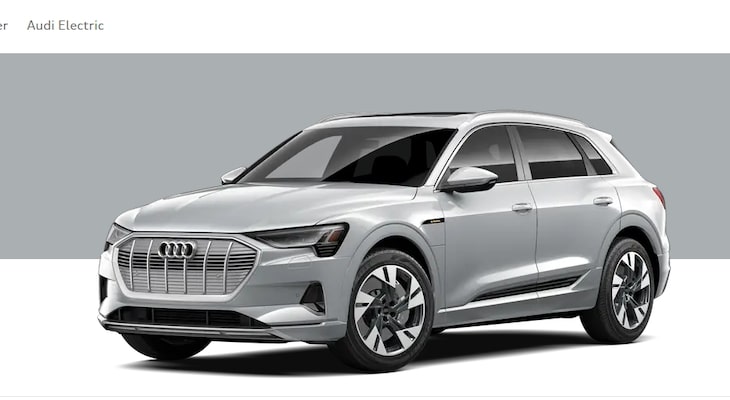 The Audi e-tron is a very traditional-looking luxury SUV from the outside. It is easily interchangeable with just about any other Audi crossover. The only indicators that it’s an electric vehicle are its charging port, aerodynamically optimized wheels, and partially closed-off Audi singleframe grille. 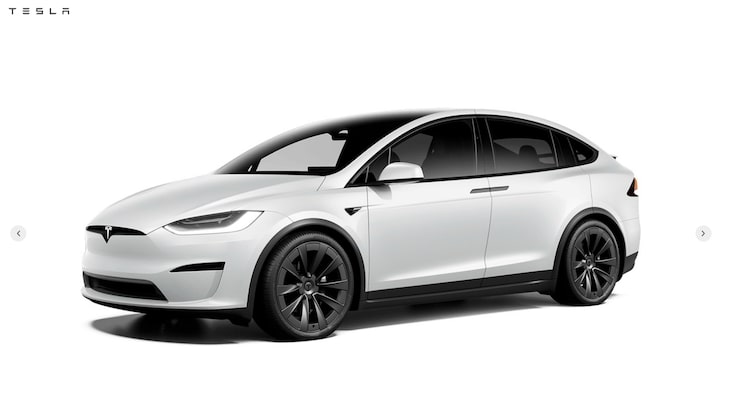 The Tesla Model X is far less traditional with its crease-free body panels and sleek bubble shape. This cut-through-the-air design does little to mask that it’s an electric vehicle. 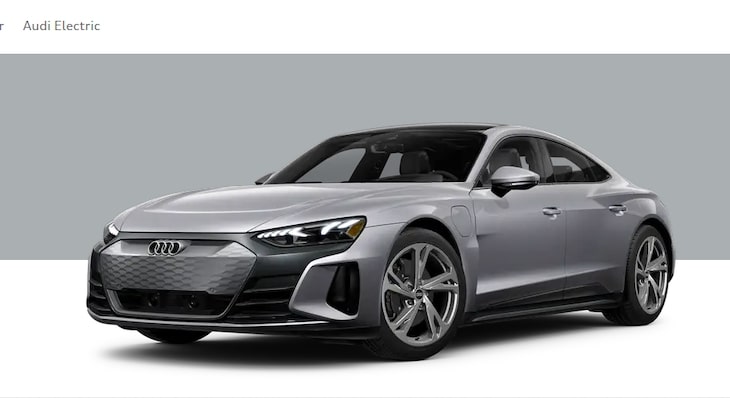 The Audi e-tron GT, on the other hand, has a unique look that stands out in Audi’s lineup. It boasts a low and long roofline with a shallow rake — the rear glass extends further out toward the rear of the vehicle — that creates almost a coupe-like look. It also features sharp matte-black accents on the front and down the sides, and its sporty wheels are placed as close to the corners as possible to help with handling. 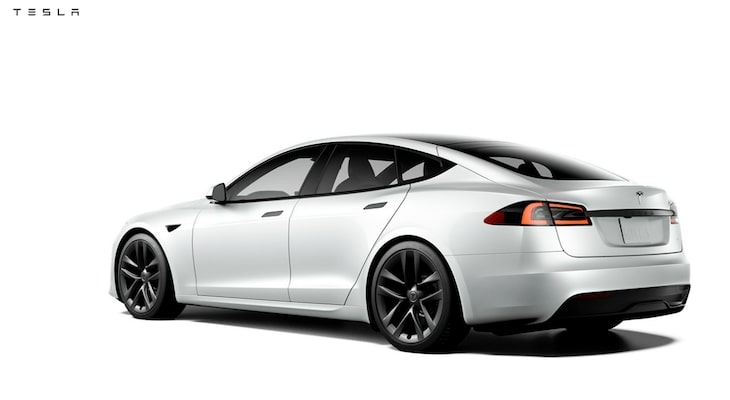 The Tesla Model S is more understated than the e-tron GT, but it’s still sporty with its long hood, swooping roofline, and coupe-like rear glass. It also features sharp ridges on the hood, adding to its sportiness. The rest of the body is relatively smooth and featureless.

Electric vehicles have some of the most advanced cabins in the industry, and the Audi e-tron, Audi e-tron GT, Tesla Model S, and Tesla Model X are no exceptions. Here’s how they measure up head-to-head. 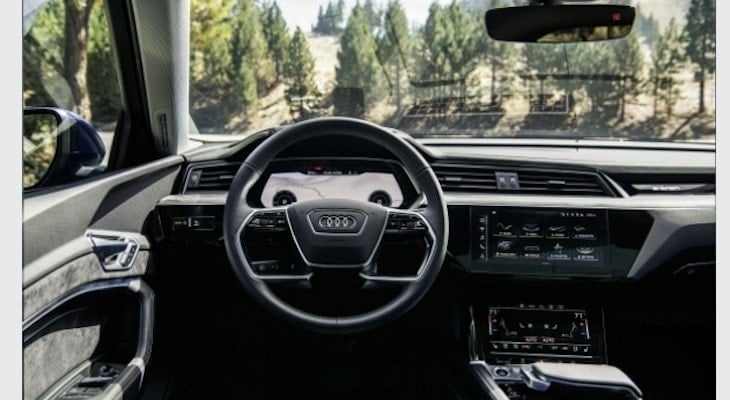 The Audi e-tron’s interior is relatively simple for an electric SUV, featuring a design that’s quite similar to other Audi models. It features a quad-horizontal-spoke steering wheel, the Virtual Cockpit digital gauge cluster, a large infotainment touchscreen with Android Auto and Apple CarPlay, and a separate touchscreen for the climate controls. The interior also features a tasteful use of angles and premium materials to give it a sporty but luxurious look.

The Model X, like all Teslas, has a simple interior that features a digital gauge cluster and a 15-inch tablet-style touchscreen that also includes the climate controls. The dash is clean and sparsely featured, but the unique squared steering wheel adds some zest. The downside is the Model X lacks Android Auto and Apple CarPlay connectivity.

In the backseat, the Model X features a 10 teraflop gaming system that, according to  Tesla, rivals all modern gaming systems. Inside the Audi e-tron GT, the design is familiar to Audi fans. It’s not over the top and feels a lot like the Audi S and RS lines of performance-focused vehicles. The e-tron GT features a flat-bottom steering wheel, a digital gauge cluster, and a 10.1-inch infotainment screen with standard Android Auto and Apple CarPlay. This design makes the e-tron GT a good fit for buyers who prefer a traditional car design. 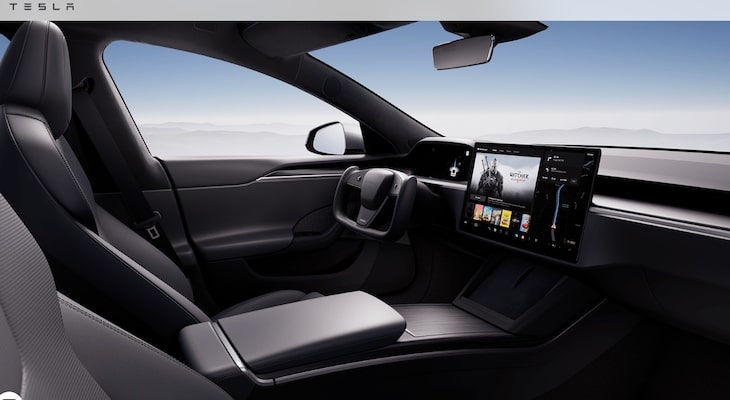 Tesla’s Model S has a cabin that’s virtually identical to the Model X’s, minus the video game system.

In terms of roominess, the Tesla Model S easily beats the e-tron GT with significantly more rear legroom and shoulder room. The Model S also hauls more like a small crossover, whereas the e-tron GT has a small trunk, similar to most sports cars, and a tiny front storage space known as the “frunk.”

Electric cars were once all about efficiency, but Tesla flipped that on its ear with the Model S, which accelerates like a supercar in a sedan’s clothing. Today, many automakers have high-performing EVs, and Audi’s e-tron lineup delivers on both speed and power. The Model X base model comes standard with dual-motor all-wheel drive (AWD). Tesla doesn’t list its output, but it can reach 60 mph in just 3.8 seconds.

The Model S base model comes standard with dual-motor AWD. Tesla doesn’t advertise the base model’s output, but accelerates to 60 mph in just 3.1 seconds.

Many people are making the shift to electric cars for their ability to drive without gasoline or diesel. However, there is still concern with the driving range of EVs, as some drivers still fear running out of battery and being stranded. Fortunately, the e-tron lineup, the Model S, and the Model X mostly put these worries to bed.

The Audi e-tron delivers 222 miles of range on a single charge. This translates to a fuel economy equivalent of 78 MPGe combined.

The base Model X’s battery pack allows it to travel 351 miles on a single charge, translating to 102 MPGe combined.

Clearly, the Model X is the ideal choice for those seeking range and efficiency.

The Audi e-tron GT boasts a 238-mile range, which results in a fuel economy equivalent of 82 MPGe combined. Opting for their RS model dips the driving range to 232 miles and the efficiency to 81 MPGe combined.

The Tesla Model S has a 405-mile maximum range in its base trim and delivers 120 MPGe combined. Moving into their Plaid version dips the maximum driving range to 396 miles and the efficiency to 116 MPGe combined.

With that impressive 405-mile range, the Model S wins another round.

Pricing is another factor to consider, especially given the premium you’ll pay for an EV. However, that premium is offset in a few ways. Charging an EV’s battery is generally a fraction of the cost of refilling a fuel tank. You’ll also save significantly in repairs and maintenance.

Plus, the Audi e-tron and e-tron GT qualify for up to a $7,500 federal tax credit. Tesla models are no longer eligible for this credit, though.

Quickly Find Your Next EV 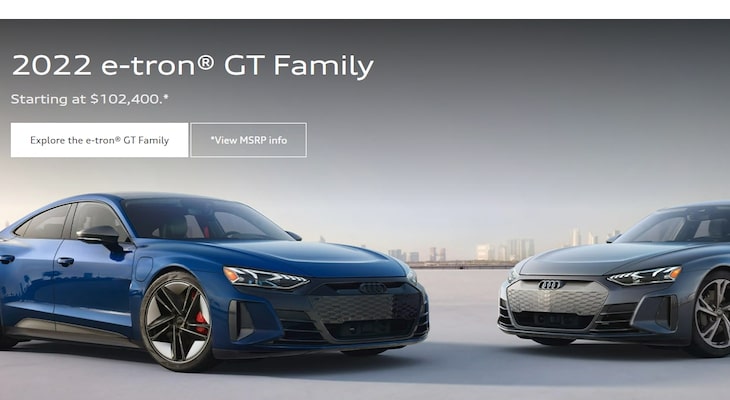 All four vehicles are great EVs for individuals or families of various sizes, but the Tesla lineup is the clear winner in EV range and efficiency. These are two of the most significant drivers in an EV purchase.

However, the Audi e-tron lineup has a lot to offer in the looks department. This makes it great for folks seeking a traditional-looking EV or a sporty sedan.