Car Insurance Rates by State: Which States are the Cheapest? 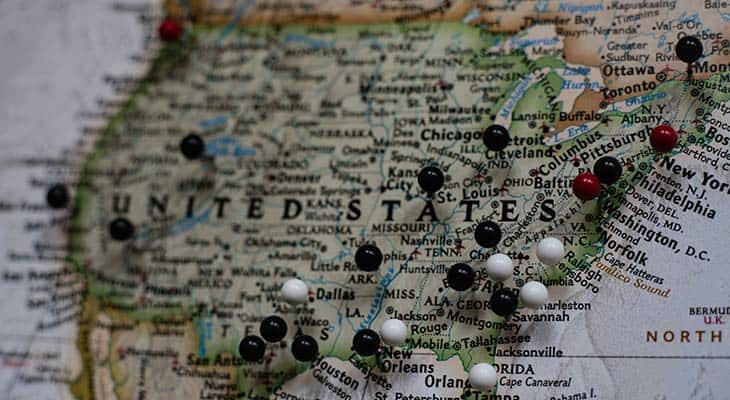 There are several ways you can save money on your monthly auto insurance bill. And while it may not always be the most realistic option, the best way to lower your car insurance rates might actually be to move to another state. Moving from New Jersey to Idaho, for example, could save the average driver nearly $700 per year on insurance.

When you compare car insurance rates by state, why are some so much more expensive than others? In general, there are a few reasons why, including: 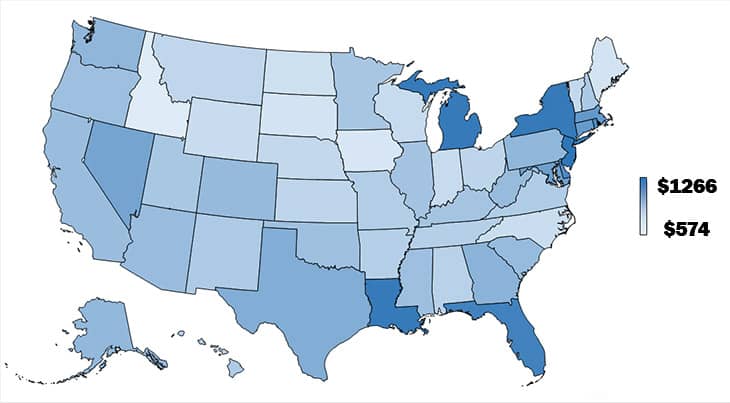 Cheapest to Most Expensive:

Sources: National Association of Insurance Commissioners for average expenditure data. Calculations by Auto Insurance Report, not endorsed by data sources. California Department of Insurance has not verified 2015 data. D.C. is entirely urban and is not directly comparable to states with rural areas.

The Most Expensive States for Car Insurance Coverage

Topping our list is New Jersey, which has the highest average car insurance rates: $1,266 per year. That’s more than $105 every month. Why is NJ car insurance so expensive? For one, it’s an urban state with lots of traffic. Did you know the western end of the George Washington Bridge is the second-worst spot for congestion in the whole country? It’s also a pretty wealthy state, which means more people are driving luxury cars that are expensive to fix. (There’s even an auto restoration shop in Jersey called “BillyBob’s Fast Expensive Cars,” which is awesome.)

But the main reason NJ car insurance is expensive is the PIP coverage requirement. Personal Injury Protection (PIP) pays for medical bills, lost wages, and other expenses if you or anyone else covered by your policy is injured in an auto accident, regardless of who was at fault. In other states, people might carry $10,000 or so in PIP benefits. In New Jersey, the minimum is $15,000, but the option most people choose is $250,000. That’s a lot of insurance coverage to pay for!

New York, which has the second-highest average car insurance rates on Compare.com’s list, also requires a lot of PIP coverage: $50,000. It’s another heavily urban state, and rates are particularly high in Brooklyn and the Bronx. Auto insurance fraud is also a persistent problem in New York.

Louisiana isn’t really an urban state or one with high traffic — so why is Louisiana car insurance so expensive? One reason is geography. In such a storm- and flood-prone state, the cost of cleaning up after disasters raises insurance rates for everyone. Another reason is poverty. More than 40 percent of Louisiana drivers carry only state minimum coverage, the Times-Picayune reports, and another 15 percent have no insurance at all. When one of these drivers gets into an accident, they may get sued if they don’t have enough insurance to cover losses, or the other driver’s uninsured motorist coverage kicks in. As a result, rates go up.

Michigan, the fourth most expensive state on our list, has an unusual quirk in its auto insurance laws. In Michigan, drivers must carry PIP coverage with unlimited medical benefits for injured drivers. This means that if you get hurt in an auto accident, your PIP will pay all your necessary medical expenses with no maximum limit, as well as up to 85 percent of the income you would have earned (up to $5,541 per month), for up to three years. Drivers also must carry property protection insurance (PPI) with a limit of $1 million, which pays for damage you cause to parked cars or other property (but not cars being driven.)

Remember: If you live in a state known for high insurance rates, you can save a lot by shopping around! Compare car insurance quotes on Compare.com and you may find insurers that will charge you hundreds less for the same coverage you already have.

Why do some states have very cheap car insurance? The answer is usually pretty simple: They’re rural. Fewer people = fewer cars = fewer collisions = lower rates. Idaho, Iowa, South Dakota, Maine and North Dakota are all among the states with the lowest population density, and they’re also the five cheapest states for car insurance on our list.

North Carolina is an interesting exception! In North Carolina, the state sets a cap on car insurance rates. As a result, insurers compete by offering a ton of discounts, resulting in low premiums. There’s a catch, however. The North Carolina Safe Driver Incentive Plan mandates hefty insurance rate increases for various traffic convictions. If you’re at fault in a minor accident, your normal NC car insurance rate will go up by 30 percent. If you’re convicted of reckless driving or passing a stopped school bus, your rates will go up by 80 percent. Driving with a blood alcohol content of 0.08 or more will jack your rates by 340 percent. Ouch.

Even if you live in a state with cheap car insurance rates, you can’t be confident that you’re getting the best deal until you compare insurance quotes on Compare.com. It only takes a minute to check rates from multiple insurance companies — try it now!