Pros and Cons of Buying a Used Tesla Model X 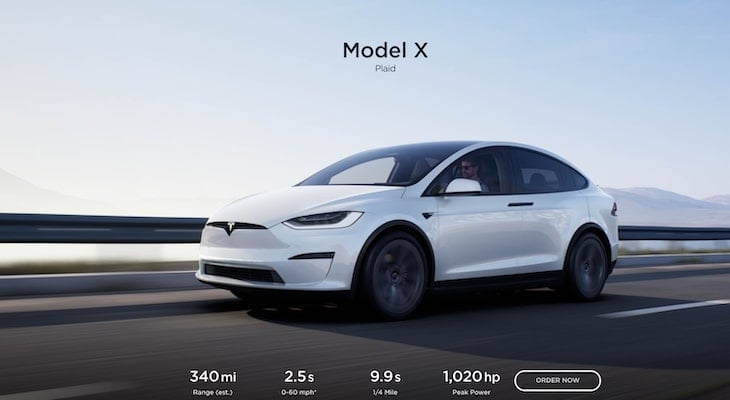 The Tesla Model X was first released in 2015, and is classified as a mid-size crossover, making it just a little bigger than other models like the Model 3 and Model Y.

It also has several other distinguishing features, such as seven-passenger seating capacity and iconic falcon-wing doors.

The Model X initially came in four trims, but now only two of them are still in production: Plaid and Long Range.

That means if you want an earlier model like the Tesla Model X Performance edition or the Long Range Plus — or you just don’t want to wait for a new Model X to be delivered — then you may want to consider buying a Tesla Model X used.

Let’s take a look at this model’s pricing, features, and trim levels, and what you need to know before deciding whether to buy a new or used Tesla Model X.

Like all Tesla models, the Tesla Model X is a fully electric vehicle, meaning you’ll have to plug it into an electric car charger to recharge the battery.

Fortunately, Tesla makes some of the most reliable electric car batteries in the industry and has a comprehensive network of Supercharger stations around the U.S.

But if you’re in the market for a hybrid or a plug-in hybrid vehicle, you’ll have to look elsewhere: The Tesla Model X (or the rest of Tesla’s vehicle lineup) doesn’t offer any models with a gasoline engine.

Here’s everything else you need to know about buying a new or used Tesla Model X: It has a dual-motor AWD (all-wheel drive) powertrain, which gets a top speed of 155 mph and can reach 50 mph in 3.8 seconds. You can choose from 20-inch or 22-inch Cyberstream alloy wheels.

Although it’s slightly more affordable than the Plaid edition, it has a similar projected wait time of at least six months.

For a faster delivery time, you can consider buying a used Tesla Model X.

If you want to compare preowned Tesla Model X’s near you, just click the button below: From the outside, the Tesla Model X looks similar to other models in terms of style. It’s built with efficiency in mind, with an aerodynamic exterior that has a drag coefficient of 0.24 Cd — which Tesla claims makes it the “lowest-drag SUV on Earth.”

The Model X is available in five exterior colors: white comes standard, while black, blue, and silver paint will set you back an extra $1,500, and red costs an extra $2,500.

But the vehicle’s most notable feature is its falcon-wing doors, also known as gull-wing doors, which are similar to those on a DeLorean. The two rear doors open out and up, making it easier to access the rear passenger seats in tight parking spaces. 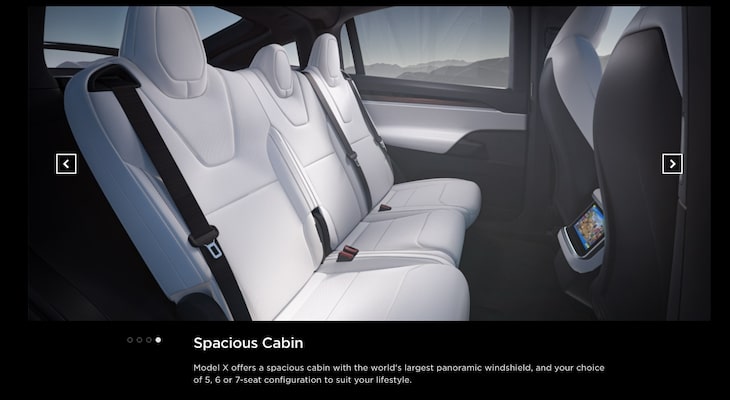 The Model X’s interior is another thing that sets it apart from similar electric cars. Many other EVs, such as the Chevrolet Bolt, are five-seat hatchbacks, but the Model X has a seating capacity of up to seven, with synthetic leather seats.

Other features include a panoramic windshield (but no sunroof), a 17-inch infotainment screen, and a yoke-style steering wheel for smoother handling.

Plus, the climate control system has separate temperature zones for the front seats and the back-row seats, as well as HEPA air filters for the entire cabin. 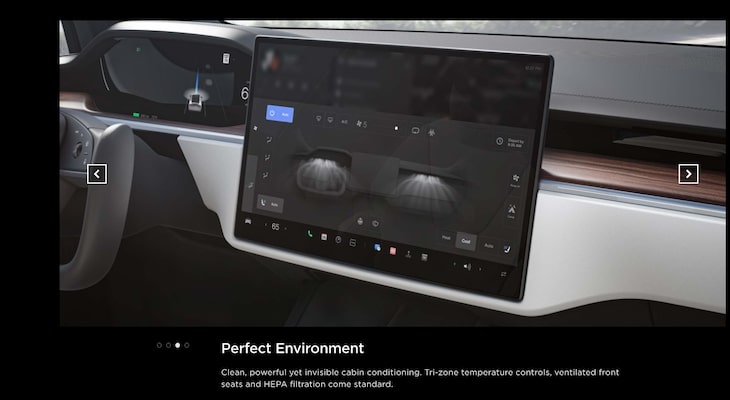 Tesla also offers full self-driving capabilities, such as auto lane change and auto park features, but you’ll have to pay an extra $10,000 for these options.

Even without that upgrade, you’ll get forward-facing cameras and backup cameras, as well as 12 ultrasonic sensors for 360-degree blind-spot monitoring and adaptive cruise control.

Other navigation system features include a Trip Planner, which will automatically find a route to your destination with enough Superchargers for you to stop at. Now that we’ve looked at all of the interior and exterior features, it’s time to weigh the pros and cons of buying a new Tesla vs. buying a used car.

Should You Buy a Used Tesla Model X?

Buying a used car may seem like a gamble, but with their long-lasting batteries and high resale value, used Tesla models are far from obsolete.

Plus, your used Tesla Model X will automatically download the latest software updates, ensuring that you have access to the newest tools and safety features.

The Model X may be too flashy for everyday commuters, but it’s great for drivers who want a stylish, high-performance ride. It can even be a great choice for families, since it’s the only Tesla model that can fit seven passengers comfortably.

If a used Model X is still out of your price range, then you may want to consider other electric car companies like Toyota, Ford, or BMW.

Learn more about our picks for the best Tesla alternatives or search for used electric cars near you.