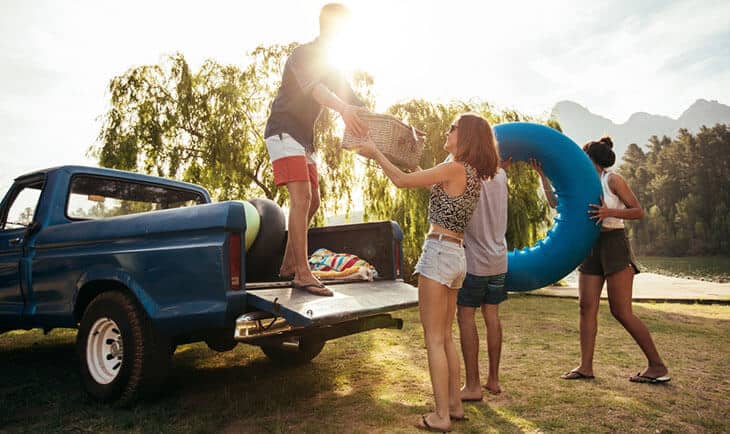 Hooray, it’s almost Memorial Weekend 2017! Whatever the weather, Memorial Day marks the beginning of summer — and an irresistible call to escape for the weekend. The only problem? Everyone else has the same idea.

We take a look at some of the most popular Memorial Weekend getaways. Plus, we offer a few alternative ideas for avoiding the crowds. Get ready to enjoy your Memorial Day weekend getaway! Just make sure you’re well protected by car insurance. We can help by giving you free quotes from multiple insurers in just minutes.

Florida is the number-one searched destination for a Memorial Weekend getaway, and for good reason. Florida is inviting and warm when northern beaches are still frigid. If you, too, want to head to Florida, just remember that there are dozens of destinations less crowded than the big cities. Instead of Miami, try Delray Beach, a fun town just an hour north with boutiques, art galleries and appealing beaches. Or, on the Gulf Coast, play on the sparkling sands of Santa Rosa Beach, where the water is Caribbean-clear. An even more remote destination is Alligator Point (named for its shape, not its gators!), a sandy peninsula with little beach cottages and abundant opportunities for clam-digging and birdwatching.

South Padre Island is stunningly beautiful, but it also gets stunningly busy on Memorial Day weekend. Expect bumper-to-bumper traffic on the Queen Isabella Causeway. For a less frustrating Memorial Day getaway, seek out a wilder beach, such as High Island on the Bolivar Peninsula. High island offers an idyllic family weekend, with soft waves and warm, shallow water. Plus, there is a four-wheel drive trip that features sand and surf in peace for those who travel past the end of the road.

Or, you can skip the beach altogether and head to Texas hill country for the long weekend. How about Bandera, the Cowboy Capital of the World, where you can see a rodeo, take a trail ride or have a drink on a saddle-shaped barstool at O.S.T.? Or Fredericksburg, Texas, a small town that celebrates its German heritage with authentic biergartens and breweries?

Highways 50 and 80 fill up fast on Memorial Day weekend, as thousands of San Francisco residents head east to Reno and Lake Tahoe. Yosemite National Park gets crazy, too; don’t even think about going unless you’ve already booked a hotel room or campsite. Instead of going to the mountains, drive along the coast to Fort Bragg, a former lumber town that’s now an inviting getaway. You can ride the Skunk Train into the redwood forests, look for polished sea glass on Glass Beach or kayak along the Noyo River.

Angelenos don’t have to head out of town for a Memorial weekend getaway. They head to the beach, even if May Gray descends, or head to one of the city’s many festivals. Fiesta Hermosa, on Hermosa Beach, has a big craft fair, a kids’ carnival, music and drinks. The Topanga Days Country Fair is an old-school hippie fest with tie-dye shirts and vegan snacks aplenty. Lots of people hop on the ferry and head to Santa Catalina island for a weekend of fishing, scuba diving and hiking. But if the LA crowds are too much, turn away from the beach. Head east to Twentynine Palms, a town in the Mojave Desert where you can explore Joshua Tree National Park or visit the famed Oasis of Mara. Or go to the resort town of Palm Springs for spa treatments, sunbathing and celebrity sightings.