Finding an electric SUV that seats seven passengers can be tricky, because the most popular types of electric cars — crossovers and hatchbacks — usually seat five.

That said, automakers are introducing more electric SUVs, minivans, and family-friendly vehicles to the market, and there are several EVs that come standard with seven seats or offer it as an optional upgrade.

Of course, there’s more to an electric car than the number of passengers it can carry. You’ll also want to take a look at its battery capacity, range, and other specs to make sure it’s a good fit for your lifestyle and budget.

Here’s what you need to know about choosing the right 7-seater electric SUV for you, and our picks for the top models currently available.

To help you get started, here are our picks for the top seven-seater electric SUVs available this year — as well as a few concept cars worth keeping an eye on. 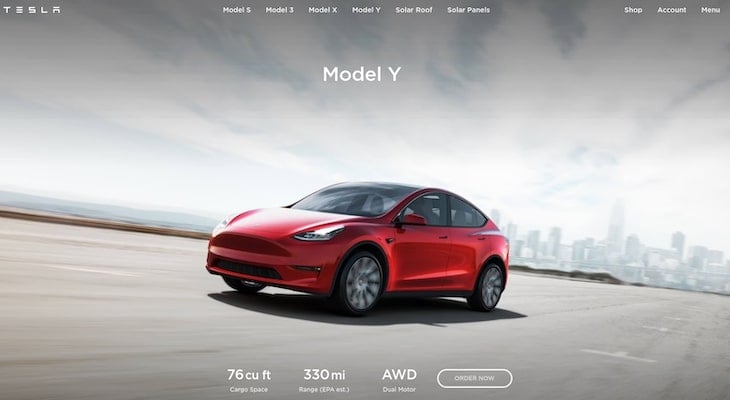 The Tesla Model Y is one of Tesla’s most versatile models, with all-wheel drive and a dual-motor powertrain that can reach a top speed of 155 mph. In order to get the 7-seat edition, however, you’ll have to opt for the Model Y Long Range AWD, which has 330 miles of range and a slightly lower top speed of 135 mph. 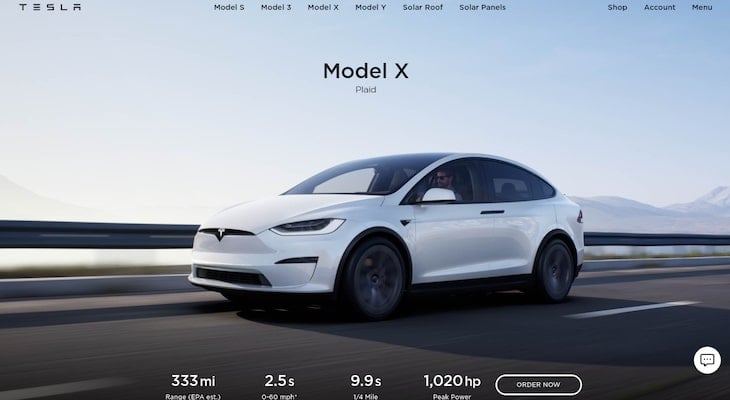 The Tesla Model X comes with 5-, 6-, and 7-seat configurations, but it will set you back a bit more than the Model Y with a starting price of $104,990. What does the extra money get you? In addition to the luxury styling you’d expect from a Tesla, you’ll also get the Model X’s unmissable (and controversial) “falcon-wing” doors.

Mercedes claims its EQB offers “electromobility in a family package.” This EV is already available in China and Europe, and will be available in the U.S. sometime in 2022. With an estimated starting price of around $50,000 and a range of 260 miles, this 7-seater EV will have a high-tech interior with voice navigation and steering wheel controls.

The Toyota Highlander is the only SUV on our list that can comfortably seat eight. It’s available in both a conventional version and a hybrid version, the latter of which gets 615 miles using gas and battery combined. Other features include a moonroof, LED headlights, and a hands-free liftgate that opens when you kick the bumper.

The Volvo XC90 Recharge is a plug-in hybrid (PHEV) with a starting price of $63,800 that gets you luxury stylings like leather-free seats and a Swedish crystal gear shifter. While its electric range of 18 miles may seem low compared to fully electric EVs, its hybrid powertrain gets 55 miles per gallon for a total of 520 miles of range. 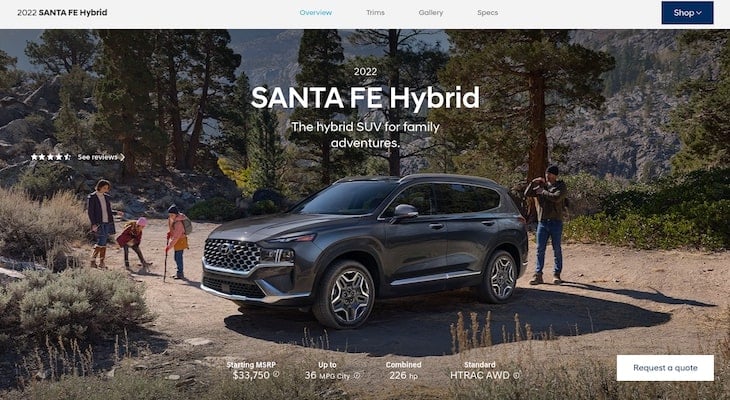 The Hyundai SANTA FE is available as both a hybrid and a plug-in hybrid, with a starting price of $33,750 for the base model. The PHEV gets 30 miles of electric range and 440 miles of total range, for an EPA-estimated fuel economy of 76 mpg. The SANTA FE can tow up to 2,000 pounds and has built-in Trailer Sway Control for added safety.

The SUVs above are some of the best cars available now, but it’s always worth looking ahead to see what’s on the horizon.

While these concept cars aren’t likely to be released any time soon, they can give you an idea of what kinds of cars we might see next year and beyond: 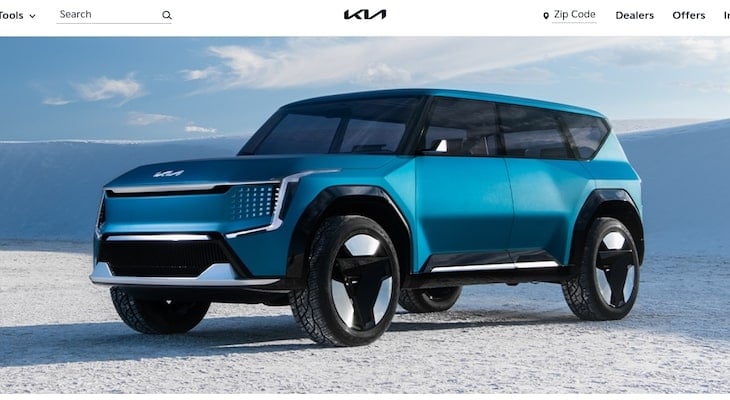 The Kia EV9 is a 7-seater SUV that looks a bit like the Kia Soul but has several futuristic features, including a solar panel on the hood and a yoke-style steering wheel. Best of all, the third row of seats can pivot, and the second row can fold into a table, making this one of the most flexible seating configurations around. 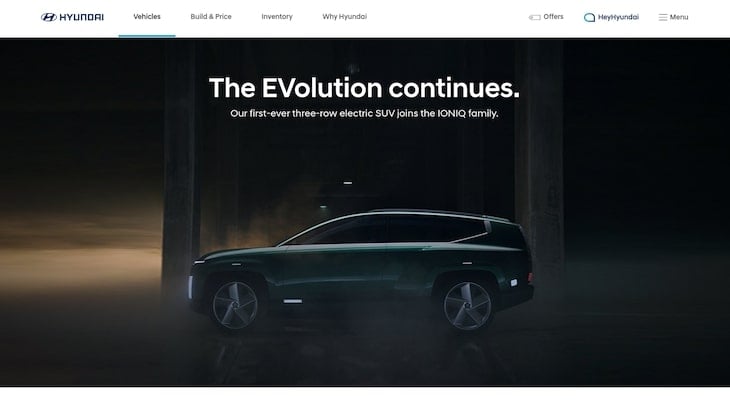 This concept car is being introduced as the next addition to the IONIQ lineup. The IONIQ is already available in electric and hybrid models, but the SEVEN adds multiple seating configurations, including a rear bench seat and front seats that can swivel around. 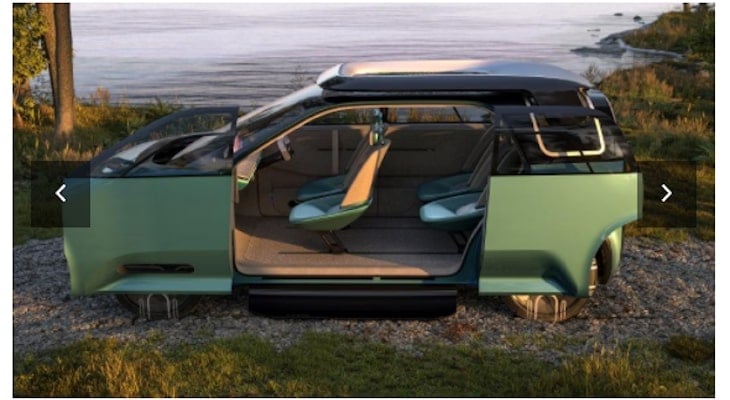 Nissan is planning to add more EVs to its lineup to ultimately take the place of the LEAF hatchback. Concepts include crossover SUVs like the Chill-Out and Hang-Out. Although the exact number of seats hasn’t been announced yet, both designs appear to follow the trend of roomy interiors with adjustable seating configurations.

What to Look for in a 7-Seater Electric SUV

The best 7-seater electric SUV depends on what you plan to use it for. If you have a big family and need to use all seven seats often, then you’ll want to look for one with plenty of legroom in the third row.

On the other hand, if you only plan to use seven seats occasionally, you may be better off with a more compact EV that gets better fuel economy.

Here are a few other things to look out for when choosing an electric vehicle:

The biggest difference between an electric car and a gas car is its powertrain. That’s the part of the car that turns the fuel source — gas or electricity — into motion.

In a fully electric vehicle like the Tesla Model X, the lithium-ion battery is the only source of power. It’s used to propel the electric motor and there’s no real “engine” to speak of.

If you drive a hybrid electric vehicle (HEV), then you’ll have both an electric motor and an internal combustion engine. That means you can refuel a hybrid at any gas station, but they have lower fuel economy and higher emissions.

Plug-in hybrids (PHEVs) give you even more options, since you can fill them with gas or plug them into a wall outlet to charge them. PHEVs tend to have a higher starting price than standard hybrids, though.

Seven-seater electric SUVs are available with all three types of powertrains, but not every automaker produces every type of electric model.

In addition to the powertrain, you’ll also want to take a look at the specs on the battery pack. The battery determines how far you can go on a single charge.

The Tesla Model S Long Range is currently the market leader with 405 miles of range, but it isn’t available in a 7-seat configuration. For that, you’ll want to consider the Tesla Model Y or Model X, which both get more than 300 miles of EPA-estimated range.

As for charging speeds, you can expect your electric car to take up to 10 hours to charge using a Level 2 wall charger and as little as 30 minutes at a fast-charging station.

This varies from model to model, though, so be sure to check which charging networks your EV is compatible with and its overall battery capacity.

Find a Seven-Seater Electric Car Near You 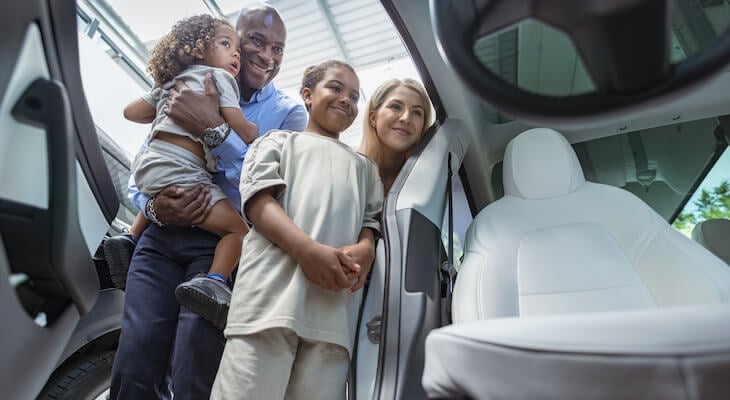 These are just a few of the things to keep in mind when deciding on the right 7-seater electric SUV for you. You’ll also need to decide whether to take home a new or used electric car, and whether it makes more sense to buy or lease.

Remember, some makes and models offer seven seats as an optional upgrade, so some used cars might not have this feature. You’ll also have to consider wait times: delivery estimates for a new Tesla Model X or Model Y can be several months away, which can be a problem if you need a new car sooner rather than later.

Before placing a pre-order for a new EV, why not see what’s available in your area? You can use this tool to find used electric cars near you that are ready for purchase.