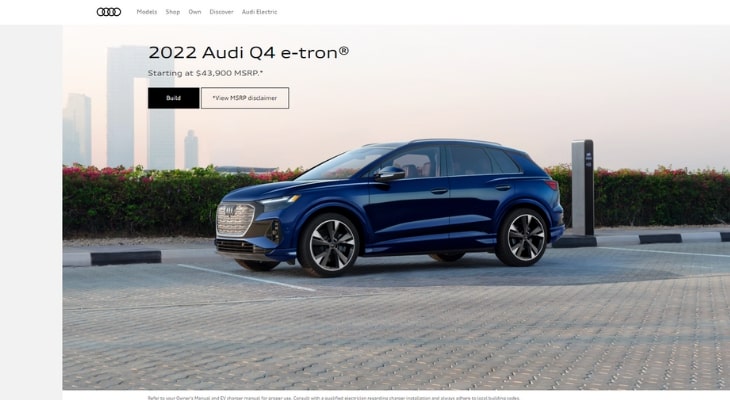 The Audi Q4 e-tron is a luxury electric crossover SUV that is one of six all-electric vehicles in the Audi e-tron segment produced for the 2022 model year.

The Audi Q4’s main competitors are the Tesla Model Y, the Volkswagen ID.4, and Ford Mustang Mach-E, among others.

It’s also important to note for technical purposes that for the 2022 model year, the rear-wheel drive version of the Audi Q4 e-tron is technically called the Audi Q4 40 e-tron, while the version with the brand’s all-wheel drive (AWD) system is the Audi Q4 50 e-tron.

The standard Q4 e-tron offers drivers a variety of performance-oriented features and luxury interior comforts, all with the peace of mind of a zero-emissions vehicle.

Read on to see what’s new in this year’s Audi Q4 e-tron and which one might be right for you.

The Audi Q4 e-tron comes in three different trims: Premium, Premium Plus, and Prestige. Both the Premium and Premium Plus models are available with a rear-wheel drive powertrain. The Prestige trim is not.

As of this writing, some features may not be available due to global supply issues affecting the auto industry. We suggest checking with your dealership to make sure the Audi hybrid SUV you choose has all the features you’re looking for.

The Audi Q4 Premium trim comes with wireless Apple CarPlay and Android Auto integration so drivers can connect their phone seamlessly to the onboard infotainment system.

In addition to a new digital instrument cluster behind the steering wheel that replaces the previous year’s analog gauges, the vehicle also comes with automatic high-beam headlights that brighten and dim according to approaching traffic and driving conditions.

Lastly, the base model Premium trim comes with automatic emergency braking that slows or stops the vehicle if it senses a collision is about to happen.

The Q4 e-tron Premium Plus trim adds a significant amount of features to those found in the Premium trim. In addition to drivability features like adaptive cruise control and automatic lane-centering, this trim adds Audi’s Virtual Cockpit touchscreen technology with the brand’s MMI Navigation Plus mapping system.

Audi’s quattro AWD powertrain comes standard in the Q4 e-tron Prestige trim. This trim’s impressive suite of technology upgrades includes an augmented reality head-up display on the windshield in front of the driver with indicated speed and navigation coordinates among other info. In addition to displaying Google Earth imagery onto navigation maps, the car’s head-up display also interacts with streets and structures in turn-by-turn navigation.

The Prestige trim’s LED headlights and taillights also adjust their brightness in accordance to external lighting conditions, another feature that proves the Prestige trim is all about making a cool impression.

The 2022 Audi Q4 e tron comes with two different powertrains, depending on whether you choose a rear-wheel drive or quattro all-wheel drive model.

The rear-wheel drive Q4 e-tron is powered by a single electric motor paired to a single-speed transmission. It offers a paltry 201 horsepower and 229 lb.-ft. of torque, making it the least powerful of all 2022 Q4 e-tron models. It is capable of accelerating from 0-to-60 mph in 7.9 seconds. Despite its small output, the rear-wheel drive model offers a towing capacity of 2,200 pounds when properly equipped.

The all-wheel drive version of the Q4 e-tron is powered by dual electric motors that each power their own axle, creating a more respectable 295 horsepower and 339 lb.-ft. of torque. The quattro AWD Q4 e-tron can tow 2,600 pounds, and has a more swift 0-to-60 mph time of 5.8 seconds.

Looking to haul luggage, sports equipment, and other cargo about town? The Audi Q4 e-tron offers an average amount of cargo space among vehicles in its class. The SUV gives drivers 28.5 cubic feet of cargo room with the rear passenger seats in an upright position.

Fold them down and you’ve got approximately 56.5 cubic feet of space. It’s more than enough room for the occasional move, camping weekend, or to haul a new TV home, but not enough if you’re planning on using it for moving things on every trip.

For drivers who don’t have an in-home charger installed, Audi has partnered with infrastructure provider Qmerit to provide ’22 Q4 e-tron customers with top-of-the-line charging equipment as well as installation by certified electrical technicians, all of which is included in the MSRP. Purchase of the vehicle includes installation of a Level 2, 240-volt/40-amp charger.

Who is the Audi Q4 e tron Best For? 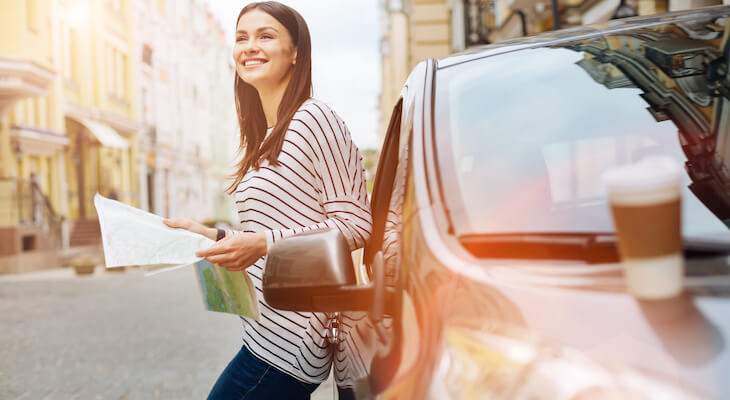 While the Audi Q4 e tron‘s AWD option makes it fairly capable in inclement weather and well-maintained, unpaved roads, it’s this all-electric SUV‘s creature comforts that win the day. So while it’s not exactly an off-road warrior or a savvy commuter option, it remains an impressively efficient and comfortable vehicle for both city dwellers and suburban families.

Drivers eager to have a zero-emissions vehicle that offers all of the entertainment, technology and safety features in a contemporary vehicle will be pleased with such a luxury-enthused vehicle at such a reasonable price point.

The Q4 has minimal traces of Audi’s penchant for performance. Those with a true passion for driving long highway distances, however, may want to consider alternatives like the Audi Q4 e-tron Sportback, or it’s cousin, the Audi e-tron GT. Those two relatives of the Q4 e-tron offer true track-ready aerodynamics, performance technology, acceleration, and top speeds.

Find the EV You’ve Been Looking For

Looking for a more utilitarian all-electric or hybrid vehicle with more cargo space and less pizazz? Or maybe something a little faster? Check out Compare.com’s vast digital library of electronic vehicle guides to find an EV that’s best for your commute, family, and budget.

If you’re ready to move forward on a purchase, use this tool to look for used electric cars near you and see what’s available.