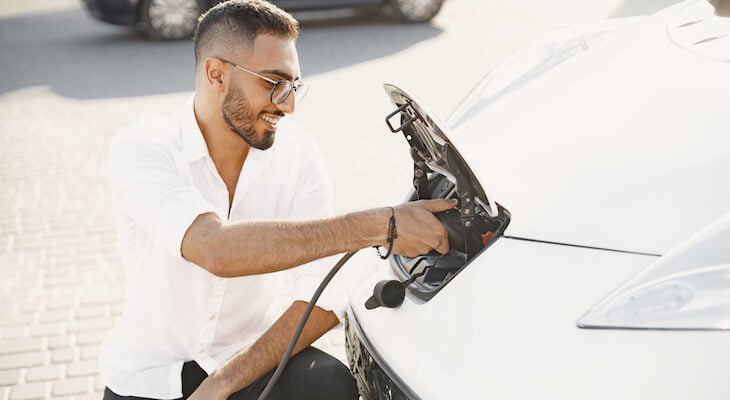 Hybrid hatchbacks make up a big chunk of the electric vehicle market. One of the first electric cars to hit the big time — the Toyota Prius — falls into that category, and so does the once popular, but now discontinued, Chevrolet Volt.

EV manufacturers are branching out into new areas, such as hybrid pickup trucks, while some car designs are still pretty hard to find. (Have you ever seen a hybrid or electric convertible?) But other car designs, like the hybrid hatchback, never go out of style.

Since hatchback EVs are still so popular, we’ve rounded up the best hybrid hatchbacks of 2022 and have included a few of our favorite used models that stand the test of time.

The Best Hybrid Hatchbacks of 2022

You can learn more about the differences between battery electric cars (BEVs) and hybrids here. In short, hybrids have a gasoline engine and BEVs don’t.

For now, let’s dive into the best hybrid hatchbacks of 2022. 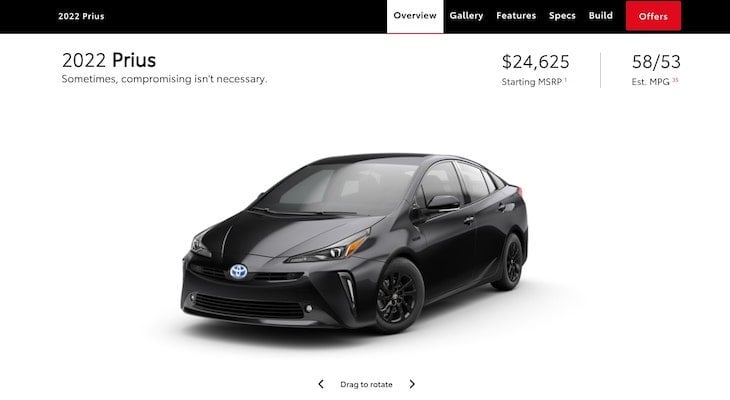 The Toyota Prius is still a popular model and has more features than ever. In addition to a hybrid powertrain that gets up to 58 miles per gallon, you’ll get LED headlights and taillights, a Smart-flow climate control system, and Hill-start Assist Control (HAC).

Plus, the 2022 model retains some classic features, like the Smart Key System and a backup camera. You’ll also get Apple CarPlay and Amazon Alexa capabilities.

This hatchback is a five seater with rear seats that fold down for more interior space. The Prius is available in several trims, including the LE AWD with all-wheel drive. 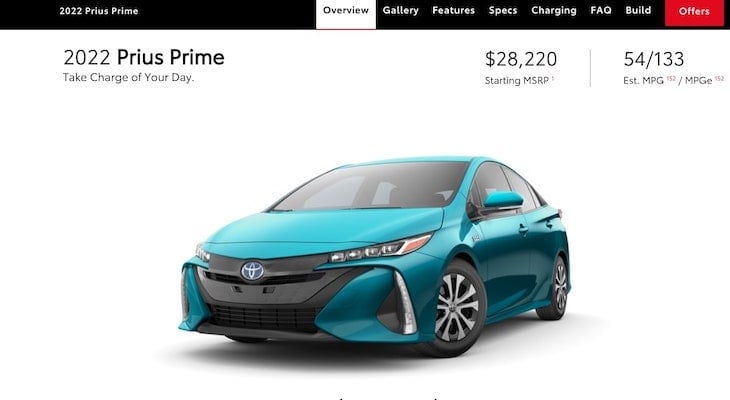 The Toyota Prius Prime also makes our list of the best hybrid hatchbacks of 2022. The difference? This one is a plug-in hybrid, which means you can plug it in to charge the battery pack or rely on the gasoline engine.

The plug-in hybrid system boosts its EPA-estimated mileage from 54 mpg when it’s in hybrid mode to 133 miles per gallon of gasoline-equivalent (MPGe) when it’s in all-electric mode.

PHEVs tend to cost a little more than standard hybrids, but the Toyota Prius Prime has a starting price of just $28,220, a little less than $4,000 more than the HEV model. 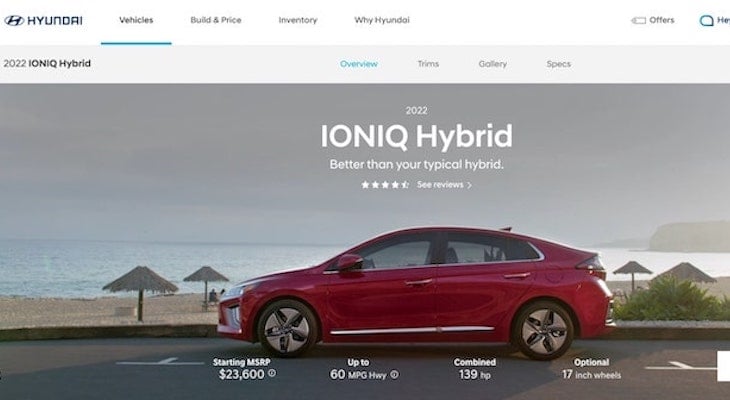 The Hyundai IONIQ actually comes in three different models, so you can take your pick: there’s a hybrid, a plug-in hybrid, and a BEV model that runs on all-electric power. With a starting price of $23,600, the IONIQ Hybrid is an affordable option that gets up to 60 mpg on the highway and a combined horsepower of 139.

Plus, Hyundai’s warranty is in a class of its own, with a complimentary maintenance program and up to 10 years of coverage on the battery pack. 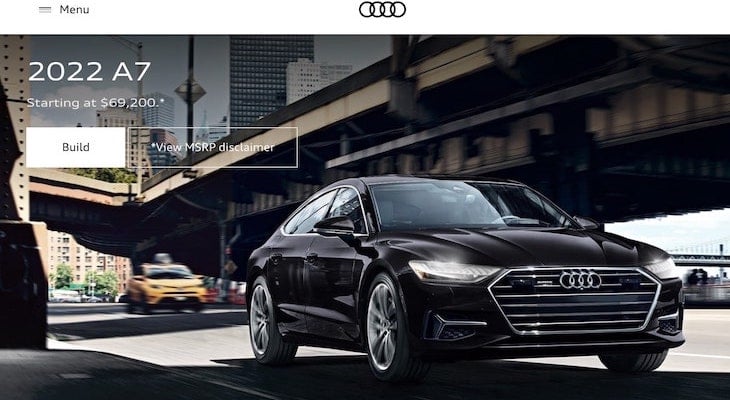 Don’t be deceived by the name: The 2022 Audi A7 Sportback is essentially a hatchback, although its sleek design makes it look more like a sedan. The A7 uses a mild hybrid system, which means you’ll only get 29 mpg, which is low compared to the Prius.

Still, for buyers who want a luxury driving experience, its performance specs may make it worth the $69,200 price tag: The turbo engine and electric motor can generate up to 335 horsepower and take you from 0-to-60 mph in 5.2 seconds.

You’ll also get a 12.3-inch HD infotainment screen with built-in navigational tools, and a driver assist system with multiple cameras to keep you safe on the road. 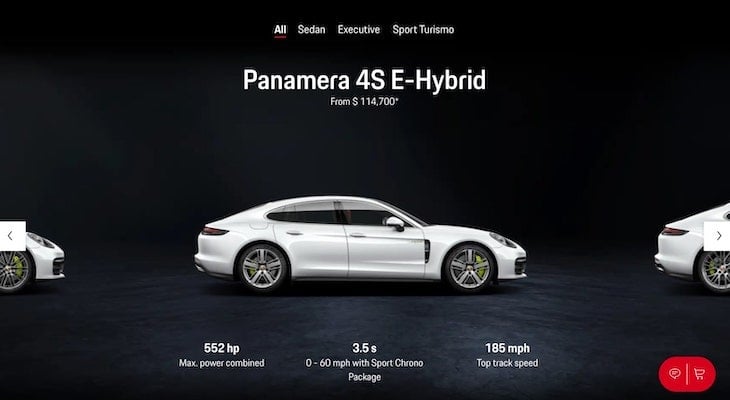 The Porsche Panamera is similar to the Audi A7 in that it combines the practicality of a hatchback with the performance of a sports car. It’s even faster than the A7 with a top speed of 185 mph and a hybrid system that can produce 552 horsepower.

The E-Hybrid version comes with Porsche InnoDrive — an adaptive cruise control and driver assist system — while the infotainment system includes a head-up display that projects your speed and other navigation data onto the windshield.

Although it’s not a small car, it’s technically a four-seater. If you select the Sport Tourismo trim, you’ll get a fifth seat so you can carry an additional passenger.

With two of the top spots on our list taken up by Porsche and Audi, you’d be forgiven for thinking that your only options are an expensive luxury car or a Toyota hybrid. Besides the Hyundai IONIQ, are there any other hybrid hatchbacks out there?

One option is to expand your search to the best hybrid SUVs or compact SUVs, like the Ford Escape SE Hybrid or the Kia Niro Hybrid.

You can also look for hybrids on the used car market. Just because a model isn’t currently in production doesn’t mean it isn’t still available, and it may turn out to be a great deal in terms of price, size, and all-electric range. 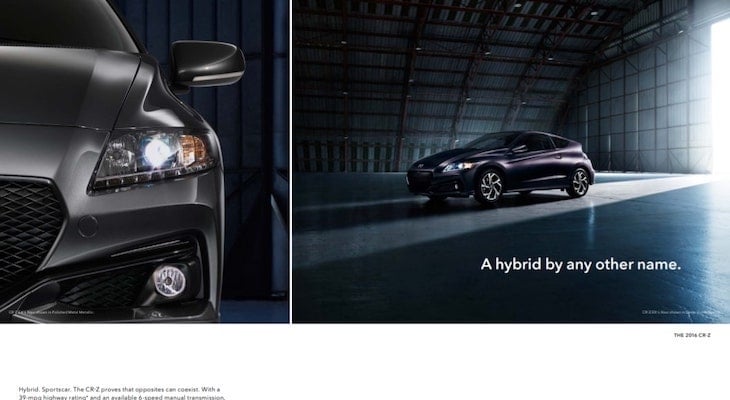 The Honda CR-Z was never a top-seller, and Honda stopped producing this two-seater hatchback way back in 2016. Still, it has a few things to recommend it. If you’re a fan of manual transmissions, for example, it may be the only hybrid out there for you.

We don’t want to over-hype this model: Most drivers would be better off with the Honda CR-V, which is a midsize hybrid SUV.

Still, if you don’t need the extra space and you’re looking for a quirky hybrid hatchback at a bargain price, the Honda CR-Z may be worth a test drive. 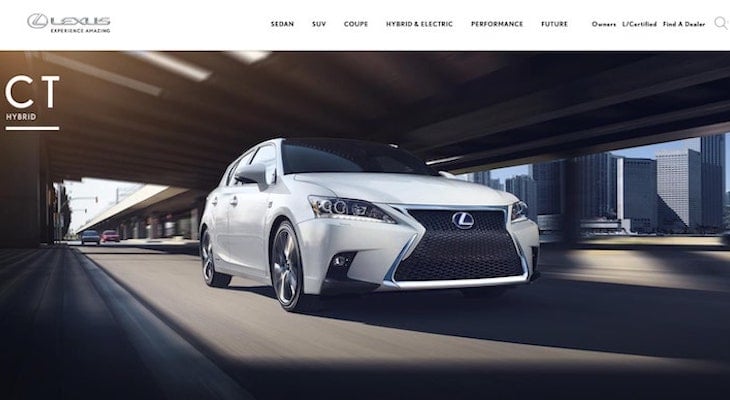 Although the Lexus CT 200h was discontinued in 2017, you can still find certified used models on the Lexus website for around $27,000. You can also look for used electric cars near you — you may find a better price from a private seller.

The CT 200h has an EPA-estimated fuel economy of 42 mpg, and up to four driving modes — Normal, Sport, ECO, and EV — depending on the model year.

Choose the Right Hybrid Electric Car for You 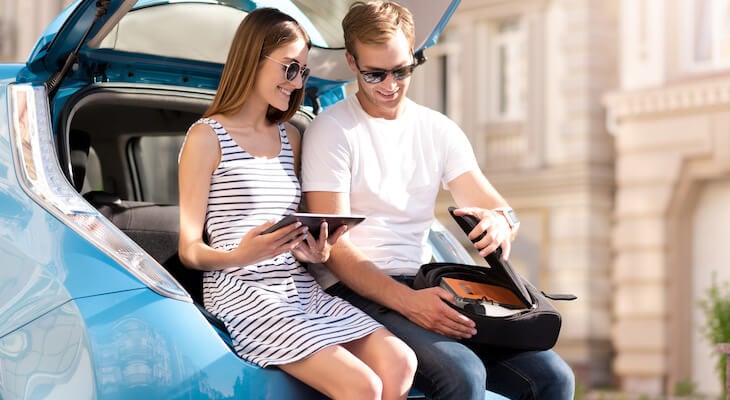 If you’re in the market for a new car, then a hybrid hatchback can be a great entry-level electric vehicle. They have lower emissions and better fuel efficiency than conventional gas cars, and they don’t require any changes to your daily driving routine.

To make the most of a plug-in hybrid, you’ll want to install a home charging station, but you can always fill up at the gas station if your battery is low.

The hatchback design offers more practicality than some electric models, with a roomy interior that’s built with real-world driving in mind.

Learn more about hybrids by reading our electric car guides, then search for electric cars near you to see what’s available in your area.