Home Electric Cars Guides Tesla 6 Seater Models: How Do They Stack Up?

Tesla 6 Seater Models: How Do They Stack Up? 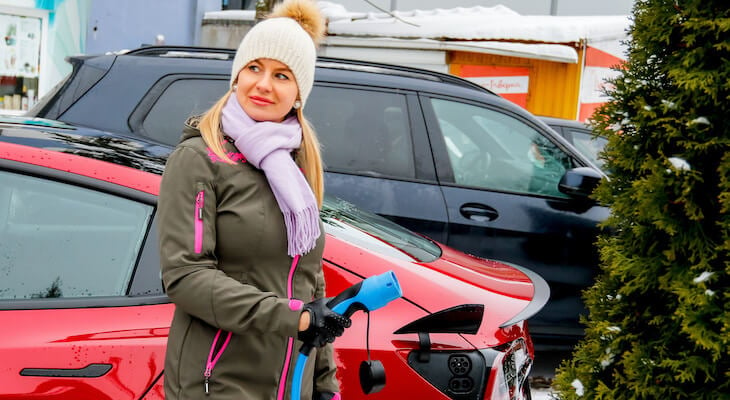 If you’re looking for an electric car with a long-range battery that can fit six passengers, then you’ve probably come across the Tesla Model X. After all, a lot of electric cars tend to be on the smaller side, including electric hatchbacks like the Nissan LEAF. The Tesla Model X is one of the few EVs available in a 6-seater configuration.

But with so many Tesla models to choose from — and trim options that seem to change by the day — you’ll want to make sure that you’re driving home the right vehicle. Here’s what you need to know about the Tesla 6-seater, as well as some alternatives if the Model X isn’t right for you or isn’t easy to find where you live.

How Many Tesla 6 Seater Models Are There?

Tesla currently has four models available for sale on its website: the Model S, Model 3, Model X, and Model Y. The Model S and Model 3 come with five seats, the Model Y is available with five or seven seats, and the Model X has a true 6-seater option.

Currently, the standard Model X is available in three configurations — five, six, or seven seats — while the Model X Plaid is only available with six seats.

Be sure to check the delivery dates before you buy: It can take up to a year before your new Tesla is delivered. If you don’t want to wait, you can look for a used Model X from a third-party seller. Here’s everything you need to know about buying a used Tesla, and an EV comparison tool to look for used electric vehicles in your area.

Compare Used EVs Near You 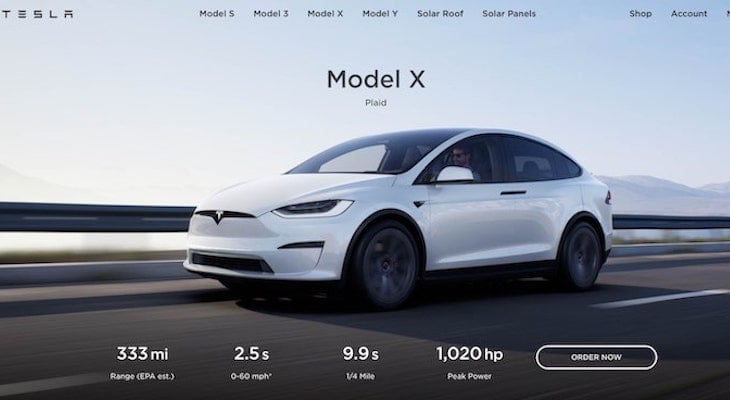 There are a few things that set the Model X apart from other Tesla models. For one, it’s classed as a crossover SUV instead of a sedan, so it has the most cargo space of any Tesla: 88 cubic feet compared to the Model 3’s meager 23 cubic feet.

The Model X has an EPA-estimated fuel economy of 105 combined MPGe (miles per gallon of gasoline-equivalent) and a range of 330 miles. The standard Model X comes with Dual Motor All-Wheel Drive, while the Plaid comes with Tri-Motor AWD: Its three electric motors can produce up to 1,020 horsepower.

Tesla doesn’t currently offer a Long Range Model X, but both trims have a 100-kWh battery pack and a towing capacity of up to 5,000 pounds.

While all Tesla models come with some Autopilot features and free software updates, you’ll need to pay an additional $12,000 for Tesla’s Full-Self Driving Capability. That doesn’t mean it’s impossible to find an affordable Tesla: the Tesla Model 3 starts at $44,990, although it only comes with five seats.

If you don’t want to spend all that money on a new car, you can look for a used Tesla on the secondhand market in your area by entering your ZIP code here:

Find a Used Tesla Near You 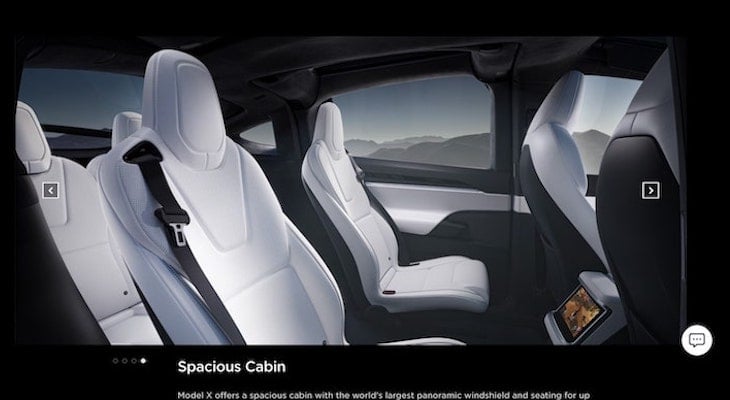 Along with the additional rear seats, the Model X has a few other design features that distinguish it from other cars by the same automaker. The most notable are the falcon wing doors, which swing upwards instead of opening out like typical rear doors.

You’ll also get a yoke-style steering wheel, a 17-inch “cinematic display” touchscreen, and up to 10 teraflops of gaming capacity in the center console. Other features include a sound system with Active Road Noise Reduction, Bluetooth connectivity for multiple devices, and advanced climate control settings.

You’ll have the option of keyless entry for convenience and practicality too, as well as fast charging using the Supercharger network.

Who is the Tesla 6-Seater Best for?

With a starting price of $104,990 — and an additional $6,500 to add a sixth seat — the Tesla Model X isn’t exactly a budget-friendly EV. It’s best for families who are set on buying a Tesla and want more room than other Tesla models offer.

The 6-seat configuration is more expensive than a 7-seat Tesla, but the falcon wing doors make it easier to install car seats in the second row.

If you need room for more adult passengers, you may have better luck with a 7-seater SUV by another automaker, since there are more options to choose from, and they all cost much less than a Tesla Model X.

Here are a few Tesla 6-seater alternatives that combine the features of a luxury SUV with extra seating capacity: 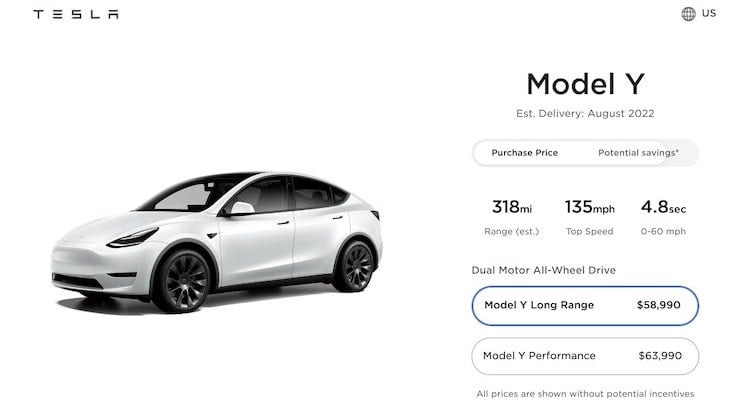 First, you could consider the Tesla Model Y Long Range. Although it isn’t available with exactly six seats, you can get a Model Y 7-seater for $61,990 — nearly half the price of the Tesla 6-seater Model X. You can compare the Model X vs. Model Y here.

The Model Y also has a 5-star safety rating from the National Highway Traffic Safety Administration (NHTSA), with a rollover risk of only 7.90%. 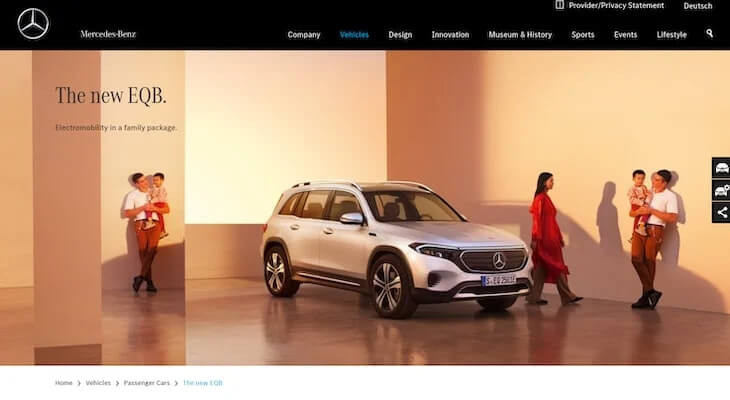 The Mercedes EQB is another Tesla 6-seater alternative. With a price tag of around $50,000, the EQB offers three rows of seats in a slightly larger package than the Tesla Model X. Like Tesla, Mercedes is also investing heavily in its driver assist technology, and you’ll find advanced voice navigation tools among other high-tech features.

When it comes to range, the EQB has a smaller battery pack than the Model X, with a range of 260 miles and around 80 kWh of battery capacity.

Audi is also reportedly introducing a three-row electric SUV as part of its e-tron lineup, but this model isn’t yet available in the U.S.

Compare Used Teslas Near You 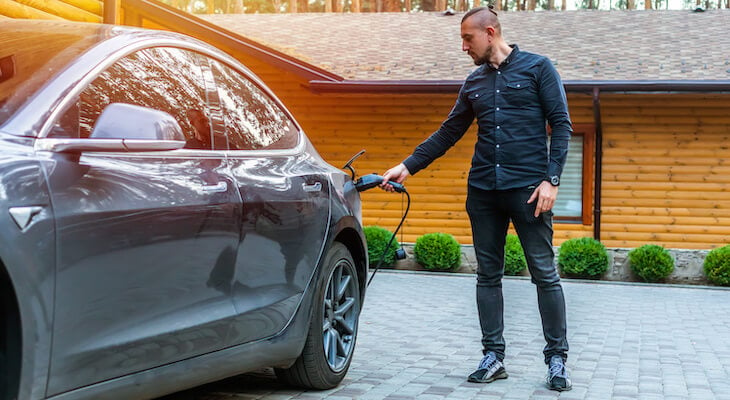 Finding a good deal on a Tesla 6-seater can be tricky, so you’ll have to decide on what’s most important to you. If you need exactly six seats, then the Tesla Model X may be the only option for you. But if you’re willing to consider other alternatives, then the Model Y 7-seater may give you more passenger room for a lower price.

Likewise, more and more Tesla competitors are introducing electric SUVs with a third row of seats, including Audi and Mercedes.

Check out our electric car guides to learn more, or use our comparison tool to find great deals on used EVs near you.

Compare Used EVs Near You