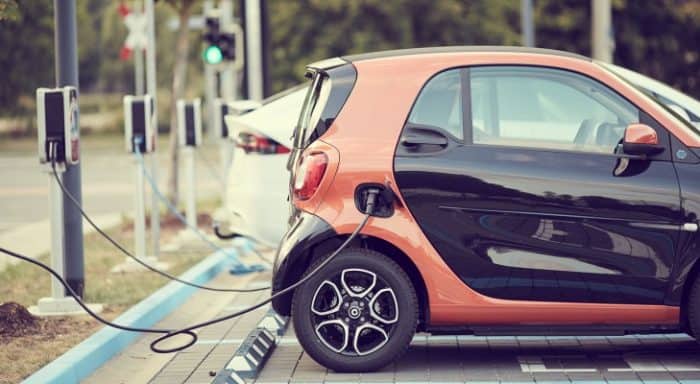 There are four main types of electric cars available, each with their own refueling and charging technologies to consider. Some can only be plugged in, while others run on gas or hydrogen power. Here’s what you need to know about all four types of electric vehicles and how to choose the one that’s right for you.

BEVs need to be plugged in to recharge, so drivers need to be aware of their range and the location of nearby charging stations. Most BEV owners will want to install a charging station at home, which can cost between $300 to $700. The U.S. Department of Energy reports that over 80% of EV charging takes place at home and that drivers can save money if they charge at “off-peak” hours.

Since BEVs don’t have a standard engine, there are fewer moving parts that can break down, which means no need for typical tune-ups and oil changes. BEVs’ electric motors are also more energy-efficient than an internal combustion engine.

BEVs also have a battery — usually made of lithium-ion — that gets recharged by the braking system as the car slows down. This is called regenerative braking and can be found in a wide range of electric vehicles.

Fully-electric vehicles can be expensive, but tax credits and other rebates are available in some states. Despite their upfront cost, electric cars are usually cheaper to maintain and operate than gas-powered vehicles. Because they’re so energy-efficient, BEVs are also being rolled out in bus and truck fleets around the country.

Local commuters with a regular schedule. BEVs don’t have a backup power source, so you’ll need to plug them in to charge at home, at work, or at the supermarket.

Hybrid electric vehicles (HEVs) are some of the most popular electric cars on the road today. Ever since the Toyota Prius was released in 1997, drivers have been turning to hybrids to improve their fuel efficiency without worrying about range.

Hybrid cars have both an electric motor and an internal combustion engine. That means they can run entirely on electric power at low speeds and for short distances.

Once you speed up, the gasoline engine will turn on and provide most of the power, and the regenerative braking mechanism will recharge the battery.

The main appeal of HEVs is that they don’t need to be plugged in. If you like to travel long distances, you don’t have to worry about getting stranded. You’ll always have the gas engine to fall back on if the battery runs out of power.

The downside to this technology is that fuel efficiency can vary widely. When shopping for HEVs, you’ll want to compare the miles per gallon (MPG) for both city and highway driving.

Long-range commuters and roadtrippers. Hybrid vehicles have a backup fuel source, so you won’t get stranded while driving through areas without charging stations.

Plug-in hybrid electric vehicles (PHEVs) are similar to HEVs, but they have an additional feature: they can be plugged in to be recharged. Plus, they’re usually designed to travel at higher speeds and for longer distances before the internal combustion engine kicks in compared to typical hybrids. Some of them have an all-electric range of up to 50 miles.

Plug-in hybrids come in two different types. Series hybrids, or extended-range electric vehicles (E-REVs), are driven entirely by the electric motor. The gas-powered engine isn’t connected to the wheels at all and is only used to power the electric motor, much like how a backup generator can power your house.

Parallel hybrids (or blended hybrids) get their name because both engines can power the wheels on their own. This is the more common type of plug-in hybrid.

Some drivers prefer PHEVs because they offer the best of both worlds. If you charge them every night and don’t travel far, you can avoid using gasoline entirely. But they’re also capable of longer trips and have a backup fuel source for those times when you forget to charge or can’t find a charging station.

Short-range commuters and gig workers. PHEVs are perfect for drivers who intend to charge frequently but want a backup fuel source, just in case.

Fuel cell electric vehicles (FCEVs) use an entirely different technology than other types of EVs. They’re powered with hydrogen fuel instead of gas, so they need to be refueled at a specialized refilling station and can’t be charged at home.

Once they’re fueled, the hydrogen is converted into electrical energy and used to power the wheels. The only thing that comes out of the tailpipe is water vapor, making it a true zero-emission vehicle.

As of 2021, FCEVs are only available in California, and there aren’t a lot of stations to refuel them at. The good news is that FCEVs have a wide range — around 300 miles — so you don’t need to refuel them as often as some other electric cars.

Fuel cell electric vehicles have been around for decades, but they’re still pretty new to the market and are more expensive than other types of electric cars.

For now, they’re ideal for drivers who want a futuristic ride, but they may not be suitable for use as a primary vehicle.

Early adopters. FCEVs are more expensive than other types of electric cars and aren’t widely available yet, but they may become more popular over time.

Fuel Economy and Other Costs

One thing that all types of electric cars have in common is fuel efficiency. Electric cars can be far more cost-effective than conventional cars and trucks when it comes to fuel consumption. The EPA uses a rating system called MPGe (miles per gallon of gasoline-equivalent) for electric vehicles, since the standard MPG system doesn’t apply.

It can also be helpful to compare the charging costs of different EV models. After all, you’ll have to pay for electricity, whether you use a home charger or go to a charging station. These costs are measured in kilowatt-hours per 100 miles (kWh/100 mi).

To help you out, we’ve put together this handy chart showing you the MPGe and annual fuel costs for three different models of the Hyundai Ioniq: BEV, HEV, and PHEV. 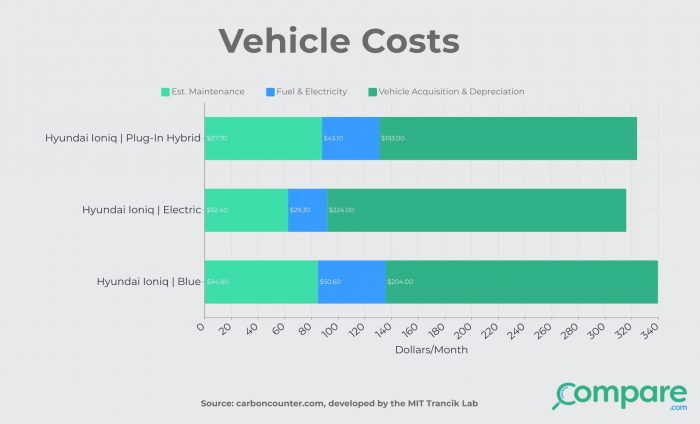 And here’s a look at the monthly costs and greenhouse gas emissions of the three Hyundais so you can see how they compare: 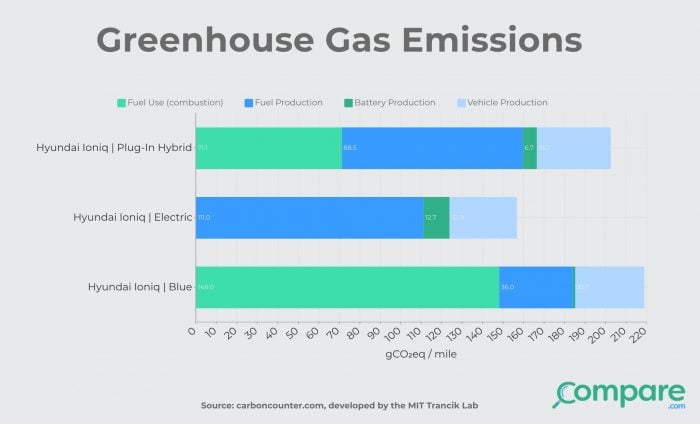 As you can see, the all-electric model costs more, but has lower fuel costs. The hybrid is the least efficient, while the PHEV is somewhere in the middle. Keep in mind that this is just one example, but it’s a useful comparison as you begin your search for an EV.

These types of electric vehicles all share some similarities, but they vary widely in terms of cost, range, and technology. Think about your typical driving habits to be sure that the type of vehicle you choose is a good fit for your location and lifestyle.

And once you’ve narrowed down your options, you can use Compare.com to compare insurance rates by car model. Then, you can factor the cost of insurance into your decision on which vehicle is the best fit for you, your needs, and your budget.