Home Electric Cars Guides Which New or Used Hyundai IONIQ is Right for You?

Which New or Used Hyundai IONIQ is Right for You? 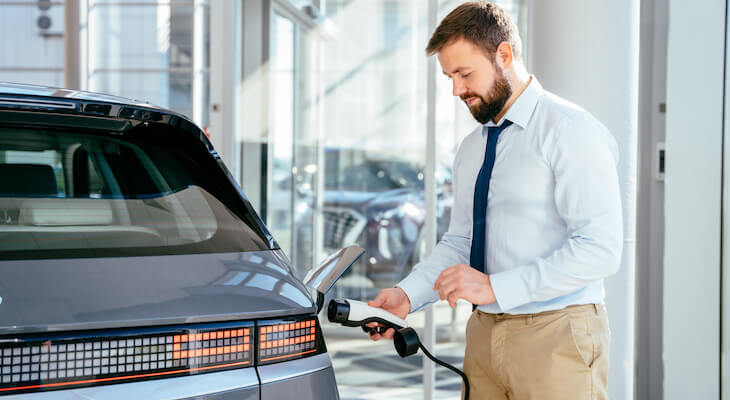 The Hyundai IONIQ has become one of the most popular electric cars in the U.S., with over 2,500 units sold in 2019. That number is only continuing to grow — and for good reason. In addition to being one of the most affordable EVs on the market, there are several different IONIQ models available to suit all types of drivers.

But with multiple models to choose from, it can be hard to figure out which is the right one for you — especially if you’ve never bought an electric vehicle before.

Here’s what you need to know about the new Hyundai IONIQ models available in 2022 and what to look for in a used Hyundai IONIQ.

The first Hyundai IONIQ was released in 2016 as a 5-door hybrid hatchback. Since then, Hyundai has released several additional versions, including a battery electric (BEV) version and a plug-in hybrid (PHEV).

We’ve also seen the introduction of the Hyundai IONIQ 5, the first SUV in the lineup, which is only available as a BEV.

Let’s take a look at how these four different versions compare: 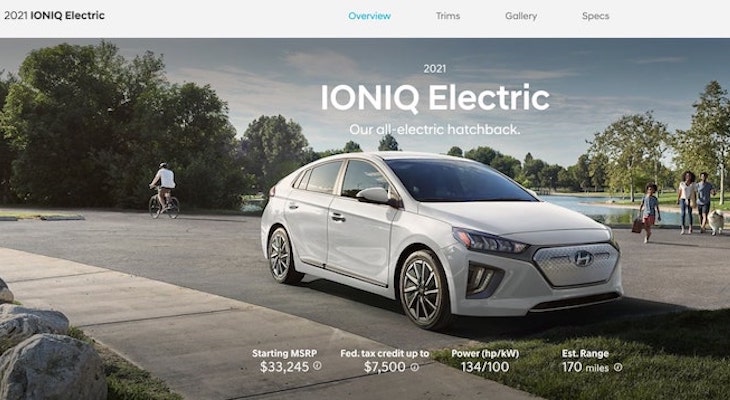 The IONIQ Electric wasn’t the first version of the IONIQ to be released, but it’s the first to be discontinued: Hyundai won’t be producing a new version of this EV for 2022. Still, you can find plenty of pre-owned IONIQs on the used car market, and for less than the recommended sticker price of $33,245.

With a range of 170 miles and an EPA-estimated fuel economy of 133 miles per gallon of gasoline-equivalent (MPGe), the IONIQ isn’t the most powerful EV out there. Other hatchbacks like the Nissan LEAF get up to 226 miles of range.

But the IONIQ Electric has plenty of other things going for it, including safety features like adaptive cruise control, blind-spot monitoring, and lane departure warning. You’ll also get a navigation system with a Bluetooth connection as well as Apple CarPlay and Android Auto compatibility. 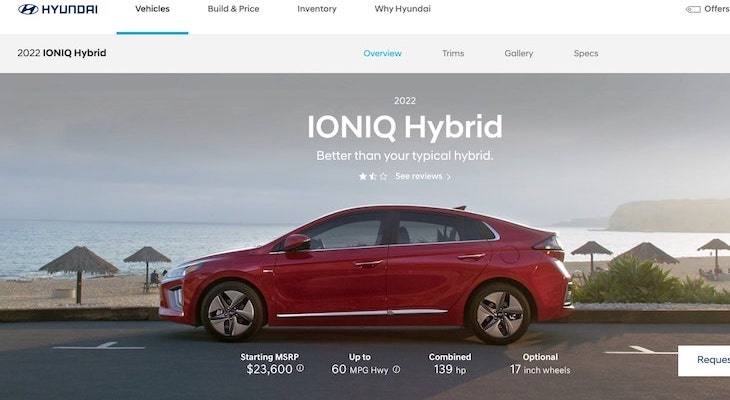 The IONIQ hybrid is the least expensive version of the IONIQ available, with a starting price of $23,600 for the 2022 edition. If you’re looking for a used Hyundai IONIQ hybrid for sale, then you’ll need to be able to distinguish between these three trims:

The Blue edition is the base model and doesn’t refer to the interior color or the exterior color of the vehicle. This trim comes with 15-inch alloy wheels, a backup camera, dual automatic climate control, and steering wheel controls for the audio system. A used Hynundai IONIQ SEL adds several interior features, such as a power sunroof, heated front seats, and an auto-dimming rear-view mirror.

Since the IONIQ hybrid can’t be plugged in, it doesn’t have an an-electric range, but you can expect a combined fuel economy of 59 mpg using the hybrid drivetrain. 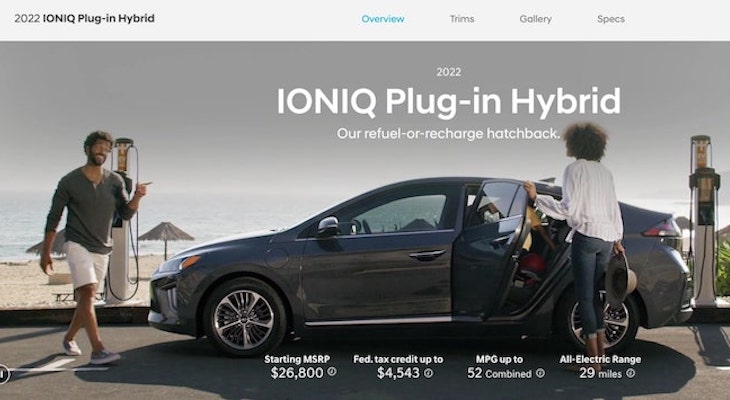 The IONIQ Plug-in Hybrid retains the body style of the conventional hybrid, but gives you more choice when it comes to fuel type. For $3,200 more than the IONIQ hybrid, you’ll get the option to either plug it into a charger or fill it up at the gas station. This gives you a fuel economy of 119 MPGe and an all-electric range of 29 miles.

You’ll get similar exterior and interior features as the standard hybrid, but you’ll only have three trims to choose from: SE, SEL, and Limited.

One thing that’s worth noting is that the PHEV is eligible for a smaller electric car tax credit than the all-electric version: $4,543 vs. $7,500. Of course, this is only a factor if you’re buying a new car, such used cars aren’t eligible for this tax credit. 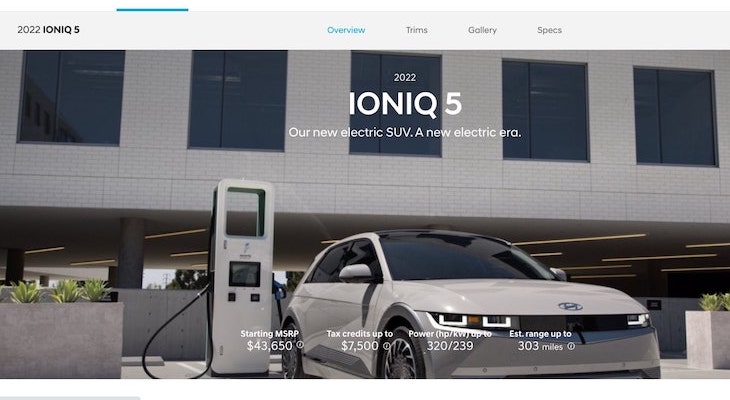 Finally, there’s the Hyundai IONIQ 5, the most expensive of the four existing models, but also the most powerful. The Standard Range version offers 220 miles of range and up to 110 MPGe, while the Long Range gets up to 303 miles and 114 MPGe. If you need all-wheel drive, you’ll get 256 miles of range and 98 MPGe.

As the first SUV in the IONIQ line-up, it has a larger body style that puts it in direct competition with other SUVs like the Kia EV 6. Still, if you’re looking for a 7-seater electric SUV, you’ll need to look elsewhere: This one only seats five.

Now, that you know which models are available, you’ll need to decide whether to buy a used Hyundai IONIQ or a new one. Which is the best car for the money?

Well, if you’re thinking of buying a new car from a dealership, Hyundai is throwing in a few things to sweeten the deal. In addition to a 10-year/100,000-mile warranty on the battery pack, you’ll get three years of complimentary maintenance.

If you buy the IONIQ 5, you’ll also get two years of free charging sessions (up to 30 minutes each) via the Electrify America charging network.

You may also want to consider leasing a Hyundai IONIQ, with deals starting at $229 per month for the PHEV and $179 per month for the BEV. However, you may be required to maintain higher levels of car insurance than if you buy a car outright.

Some of the latest IONIQ models are on the pricey side, so if you want a good deal on an electric car, you may need to look for a used model. You can use our handy tool to enter your ZIP code and find used Hyundai IONIQs and electric cars of all kinds available near you:

Search for Used Cars Near You

Depending on where you live, you may be able to find a used Hyundai IONIQ Hybrid for sale for under $20,000 — less than half the price of a new IONIQ 5.

Of course, buying a used IONIQ isn’t your only option. If you’re looking for a hatchback, then the Toyota Prius Prime and Chevrolet Bolt offer the IONIQ some stiff competition, while the Kia EV 6 is a similarly-priced alternative to the IONIQ 5.

Hyundai also makes other hybrid and electric vehicles, such as the Hyundai Elantra hybrid and the all-electric KONA, that are also worth considering.

Find a Used Electric Car Near You 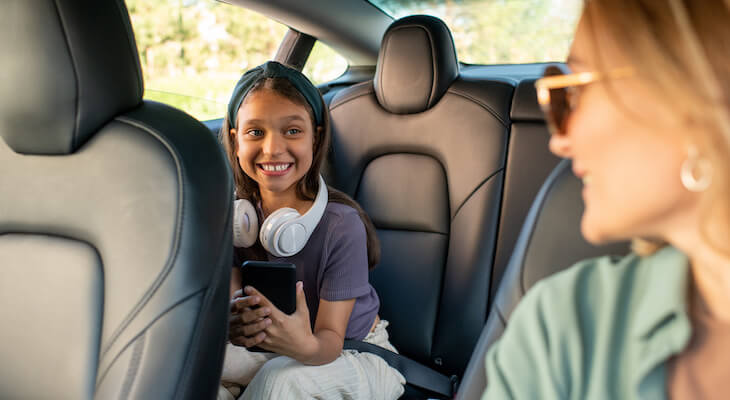 Buying a used electric car for the first time can be scary, but as long as you check the vehicle history and take it for a test drive, there’s no reason to assume that a used EV will be any less reliable than a conventional car. In fact, a closer look suggests that electric cars and hybrids last longer than gas cars and require less maintenance.

You can learn more about electric vehicles here, or enter your ZIP code now to start comparing used electric cars near you: