Home Electric Cars Guides Volkswagen ID.3: Pros, Cons, and How to Buy It

Volkswagen ID.3: Pros, Cons, and How to Buy It 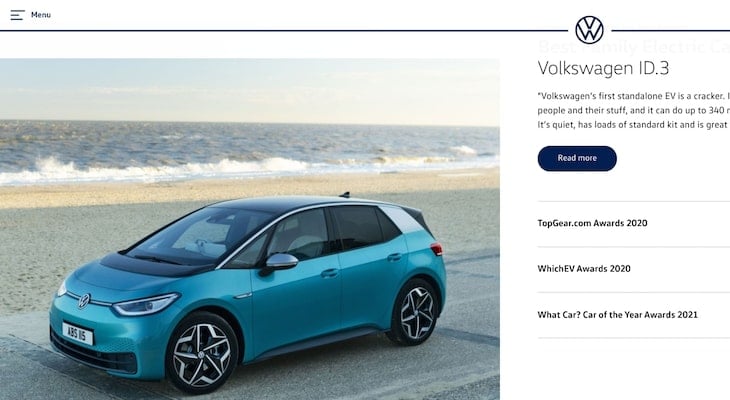 Volkswagen has produced several innovative cars, from the classic Beetle to the iconic VW van. The all-electric ID.3 is Volkwagen’s most recent foray into the electric car market, after the 2015 Volkswagen e-Golf and a 1970s model called the CityStromer. The ID.3 1st edition launched at the International Motor Show in Frankfurt, Germany in 2019.

The VW ID.3 is a fully-electric, 5-door hatchback with three different battery options and a range of more than 200 miles, making it a strong competitor to similar battery-electric vehicles (BEVs) like the Chevrolet Bolt and the Nissan LEAF.

Unfortunately, there are no plans to bring the Volkswagen ID.3 to the U.S., so if you like what you see, you’ll have to move up to the ID.4, purchase a used e-Golf, or buy a different EV with similar specs that are available where you live.

Compare Volkswagens Near You

How the Volkswagen ID.3 Stacks Up

The Volkswagen ID.3’s outward appearance doesn’t show off the fact that it’s an electric car. Like other VW models, it has a stylish design while still being practical for use as a commuter vehicle or an everyday family car.

You can choose from one of six metallic finishes and several internal trims, all of which feature a 10-color ambient lighting system and a 10-inch infotainment screen.

As for its technical specs, the ID.3 comes in multiple versions with several different battery sizes. The ID.3 Pure has a 45-kWh battery capacity and a range of around 215 miles. It has a top speed of 160 kilometers per hour, or around 100 miles per hour, and a 33-foot turning circle.

All of these options are available in several combinations as shown below. One notable difference is that the Tour Pro S only seats four people due to its larger battery size. 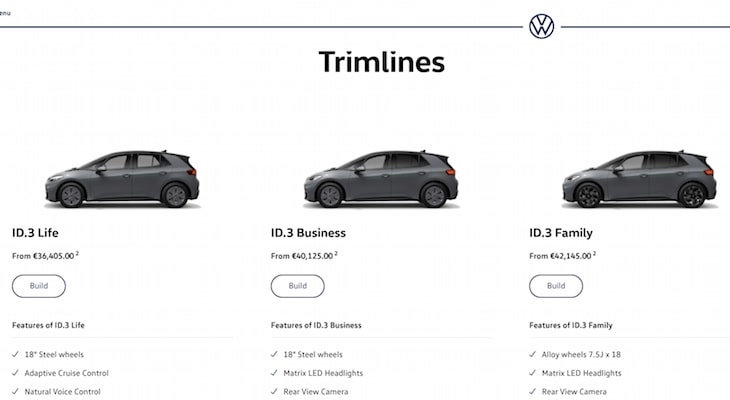 Aside from these basic specs, what else does the ID.3 have going for it? While it’s not as high-tech as the Tesla Model S, it has several futuristic features, including a digital dashboard with touchscreen controls instead of a panel of buttons.

It’s also compatible with Android Auto and Apple CarPlay using App Connect, and has an augmented reality display that will show you navigational cues on the windshield!

Other handy features include:

All of this makes the ID.3 a car that’s fun to drive, while sporting a powerful electric motor and single-speed transmission that can take the car from zero to 60 mph in just over seven seconds. The ID.3 has a drag coefficient of 0.27 and is just under 168 inches in length.

As is standard with all modern BEVs, hybrid electric vehicles (HEVs), and plug-in hybrids (PHEVs) the ID.3 uses regenerative braking to recharge the battery while you drive.

The ID.3 comes with a reasonably sized trunk, with a cargo volume of 14 cubic feet — just a little less than comparable EV hatchbacks. Optional add-ons include a panoramic glass roof that makes the interior feel even more spacious than it is.

Despite these selling points, there are a few disadvantages to buying an ID.3, starting with the pricing. Currently, the car is priced at around the equivalent of $42,000 USD. Although that’s cheaper than a Tesla, it’s more expensive than other EVs like the Nissan LEAF.

In addition, the ID.3’s advanced features may take some getting used to for first-time EV drivers who haven’t owned an electric car before.

For example, you don’t need to insert a key or even press a button to start up the car; as long as you have the key in your possession, you can start driving, and the car will turn off automatically when you leave.

This can either be a pro or a con depending on how much control you want over the basic functions of your vehicle.

Finally, the ID.3 takes longer to charge than some of its competitors. The base model takes around an hour to charge using 50 kW DC power, but upgrades are available for those who want faster charging capabilities.

Compare Volkswagens Near You

Alternatives to the Volkswagen ID.3

The Volkswagen Group is heavily investing in new EVs and battery technology, including the MEB platform, which stands for Modularer E-Antriebs-Baukasten (German for “modular electric drive matrix”) and will make it easier for VW to swap battery technology between different models, including Audis and several other VAG brands.

They also plan to implement bidirectional charging, which means you could be able to use your EV battery pack to power your home in an emergency.

For now, what options are on the horizon and how do they compare to the ID.3? Let’s take a look at three other Volkswagen models to see how they stack up. 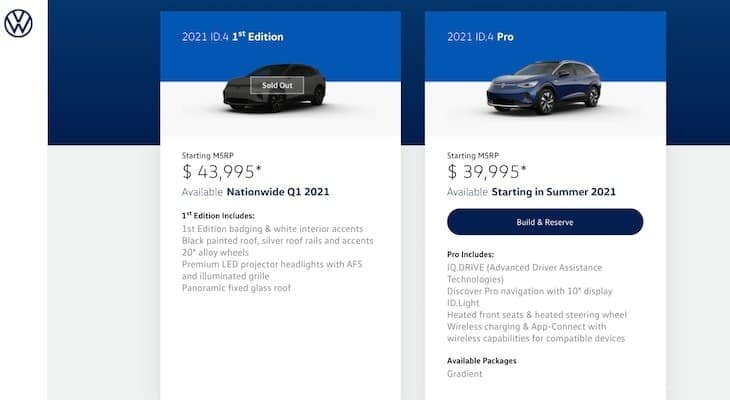 The ID.4 just recently hit the American market in 2021. The first batch of cars are German imports, but they’ll be followed by cars produced in Chattanooga, Tennessee, starting as early as 2022. It comes in both a rear-wheel drive and all-wheel drive version.

The ID.4 differs from the ID.3 in that it’s a crossover SUV rather than a hatchback. It has an 82-kWh battery, with a maximum range of around 250 miles.

The U.S. Department of Energy gives it a combined city/highway miles per gallon of gasoline-equivalent of 99, and an annual fuel cost of $650.

Another option — for those who can afford to wait a few years — is the ID.Buzz, which is modeled after the class Type 2 Microbus and will be the first EV of its kind.

It’s expected to have multiple seating configurations and around 300 miles of range on a fully-charged battery, with a price tag of around $40,000. The ID.Buzz will be launched in Europe first and will be available in the U.S. starting in 2023.

If you don’t want to wait for these models to come to the U.S. but you still want to drive an all-electric Volkswagen, you might want to consider buying a used electric car such as the VW e-Golf. This car was in production from 2015 to 2020, and used e-Golfs are available for as little as $9,000-$13,000.

While not as powerful as the ID.3 or ID.4, the 2017 model has a range of around 125 miles per charge, making it a suitable alternative for those on a budget.

How to Buy a Volkswagen ID.3

The bad news is that the ID.3 isn’t yet available in the U.S., only in European markets. But Volkswagen plans to expand its U.S offerings over the next few years, so VW fans will have several options to choose from, including the ID.4 and the ID.Buzz.

Once these models are available in the U.S., drivers will be able to choose the best EV for their lifestyle, including a hatchback, a crossover SUV, or an all-electric minibus.

If you don’t want to wait for the new Volkswagen ID, you can consider buying a similar EV model, such as the Chevy Bolt or the Nissan LEAF, or leasing an EV while you wait for the ID.3 to roll out.

If you aren’t sure about the ID.3 and want something a little more stylish, take a look at some of these other Tesla alternatives that won’t break the bank.