When we were kids we dreamed of flying cars. Now, we’re about to see something just as cool become a reality: a world filled with self-driving cars. The Insurance Institute for Highway Safety predicts that there will be 3.5 million self-driving vehicles by 2025, and 4.5 million by 2030.

The possible benefits are huge: Less traffic. Fewer parking lots and garages. Easy transportation for visually impaired people. No more drunk-driving accidents. The advent of autonomous cars is also going to change many things we now take for granted, in ways we may not expect.

Compare.com CEO Andrew Rose has been watching the development of this new technology closely. Here are the ways he predicts self-driving cars will change the world as we know it.

Self-driving cars will be lighter, sleeker and safer.

Over the years, automakers have rolled out all kinds of advances to make cars safer. Seat belts were made mandatory in 1984. Front air bags became standard soon after. As of 2017, cars and SUVs must meet improved roof strength standards to protect passengers in rollover crashes. And all new cars will be required to have backup cameras by 2018.

But the threat of car accidents will be greatly reduced — and possibly removed — by autonomous technology. “As a result, car manufacturers will no longer need to make bulky steel cars when they can make eco-friendly, lightweight and fuel-efficient vehicles,” Rose notes. “Imagine yourself driving a bamboo car.”

Car insurance will become cheaper — but it won’t go away.

If we let cars drive themselves, will we still need car insurance? The short answer is yes. For the foreseeable future, people — and computers — will still be crashing cars. Insurance companies will probably face sinking premiums as a result of falling accident rates. But theft, floods and hailstorms will still happen, so comprehensive coverage for physical damage will continue to be necessary.

Another possible consequence, according to the Insurance Information Institute, is that the accidents that do occur will lead to a higher percentage of product liability claims, as people blame car manufacturers for accidents rather than themselves. “One potential move is for insurance companies to embrace unlimited liability policies to sustain premium levels,” Rose predicts.

“Hurt in a car accident?” lawyers’ ads blare. “You’re entitled to compensation! Call now!” You’ll be hearing far fewer of those ads once self-driving cars become the norm. “As the frequency of accidents declines,” Rose says, “there will be less of a demand for litigation lawyers to help citizens sue for compensation.”

Roadside assistance will go the way of the pay phone. 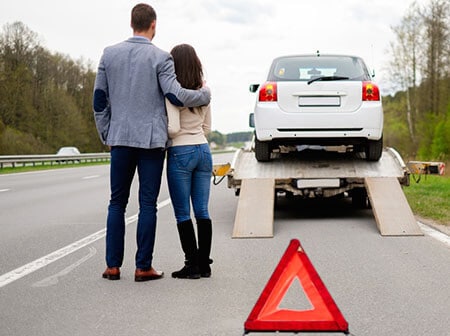 Car breakdowns always seem to happen at the worst times: When you’re on your way to a job interview. When you’re a hundred miles from home. Or when your roadside assistance plan just lapsed. What if you never had to worry about a breakdown again? “It will become difficult for roadside-assistance programs to stay relevant when cars can sense a malfunction before it happens,” Rose says. “Neighborhood garages also may feel the impact, as autonomous cars will be programmed to receive service from the dealer.”

Self-driving cars have a hard time with bad roads. Faded lane markings, inconsistent signage, and other quirks confuse the driving software — and 65 percent of U.S. roads are in poor shape, according to the U.S. Department of Transportation. As autonomous cars become more and more common, road maintenance will have to keep pace. The good news is that the cars themselves can help, by automatically reporting things that need fixing to local highway departments. (Will we ever see self-driving pothole fillers? Maybe!)

Cybersecurity will become the next frontier in vehicle safety.

When we’re all riding in autonomous cars, the danger won’t be other drivers, but faceless cyberterrorists. Rose describes a chilling scenario: “Imagine the next terrorist event not occurring in a single location, but on every corner of every street. A terrorist hacks in and commands every autonomous Toyota to abruptly turn left the following day at 8:45 AM. In one second, millions of cars crash. One small action in a computer system leads to massive injury or loss of life, billions in damages and a shaken trust in anyone who has ever been in an autonomous car.”

Other possibilities include terrorist groups using driverless cars to carry out bombings. The Islamic State may already be working on ways to use this new technology, the International Business Times has reported. As a result, car manufacturers and law enforcement will have to work hard to stay ahead of evildoers.

We’ll have to wait a few years until we’re all in driverless cars. Until then, you can lower your car insurance bill by shopping around on Compare.com! It takes just minutes to get multiple, free quotes.