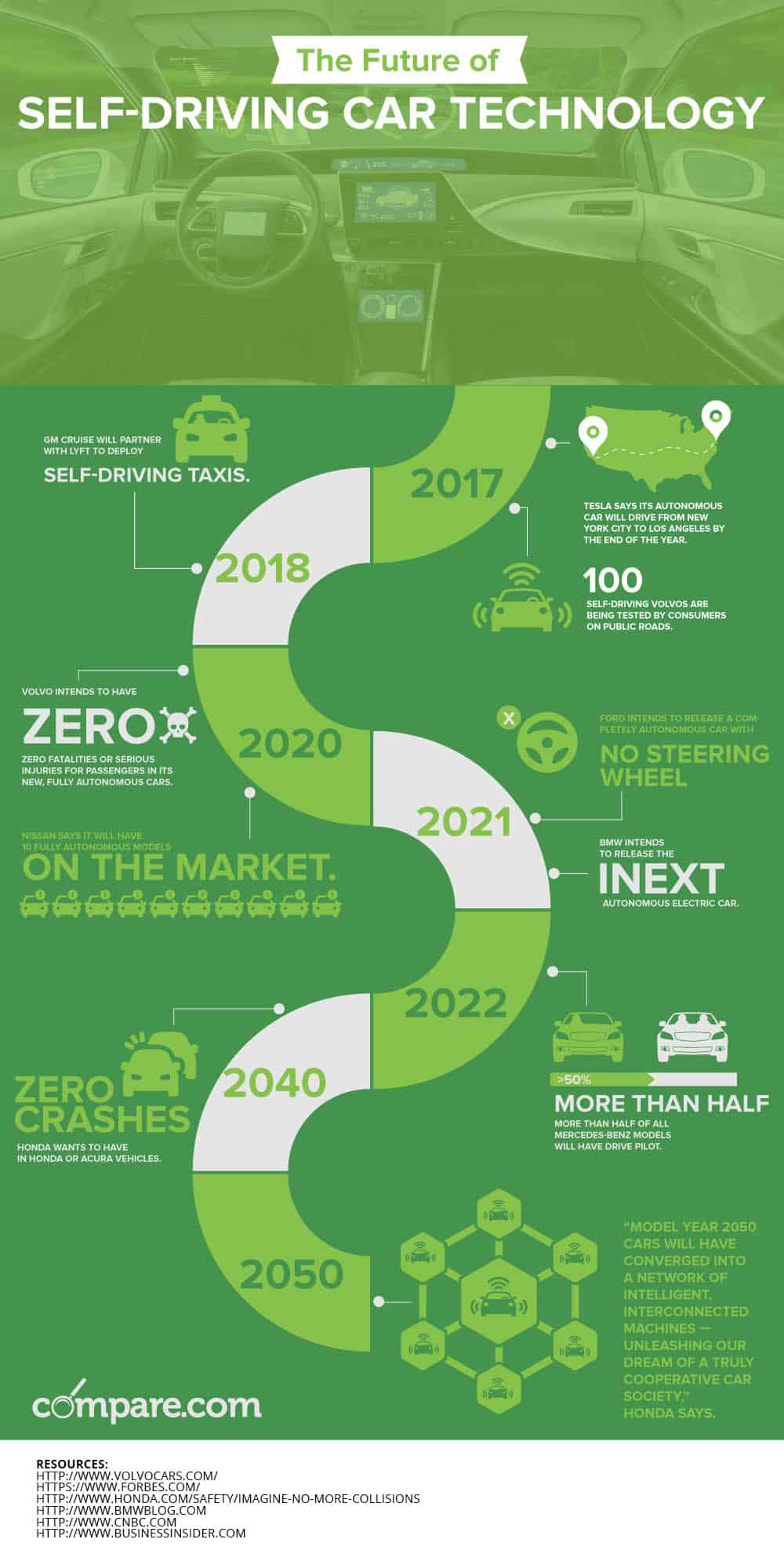 Some people scoff. Some people say they’ll never, ever let go of the steering wheel. But like it or not, driverless cars are coming: The Insurance Institute for Highway Safety predicts that there will be 3.5 million self-driving vehicles by 2025. But who’s going to be making all these crazy cars? Tech firms and automakers are in a desperate race to decide that question, right now. We compare self-driving car makers.

Here’s the rundown of what’s going on with the leading self-driving car makers, as of 2017.

Google first began developing autonomous car technology in 2009. In 2016, Waymo (a company spun off from Google) logged more than 635,000 miles of testing on California’s public roads. All other autonomous carmakers logged 20,286 miles — combined.

What do all these numbers mean? Quite simply, Waymo is the world’s leader when it comes to self-driving cars. But that doesn’t mean it’s been a smooth road. Waymo/Google cars have been involved in several accidents, although most were the fault of human drivers. There’s good news, too: Waymo’s testing reveals a big drop in “disengagements,” instances when human drivers had to step in and intervene.

Waymo may be the closest to bringing a truly driverless car to market.

Tesla Motors, maker of sexy electric vehicles, was an early innovator in self-driving technology. Its customers began using Tesla’s Autopilot feature while other carmakers were still tentatively testing their tech. But In May 2016, a Tesla driver died when his car crashed into the side of a semi truck. The autopilot failed to distinguish the truck’s white trailer from the bright sky. However, federal investigators found no defects in the system, instead blaming the accident on driver inattention.

Tesla continues to test its self-driving cars on public roads, and plans to demonstrate an autonomous road trip from Los Angeles to New York by the end of 2017.

Brace yourself for a tiny twinge of jealousy. In 2016, 31-year-old Kyle Vogt and his business partner, Daniel Kan, sold their startup Cruise Automation to General Motors for a cool $1 billion. In short, they “built self-driving car software so compelling that GM had to have it,” Fortune says. So far, the effort is rolling right along. In early 2017, GM released a video of an autonomous Chevrolet Bolt driving itself around the streets of Detroit, navigating around buses, bicyclists and pedestrians. GM Cruise has also teamed up with Lyft to deploy thousands of self-driving taxis by 2018.

Mercedes has surprised a lot of people with the sophistication of the Drive Pilot feature in its S-Class. It is capable of taking over about 80 percent of driving operations. But, The Verve notes, “the system is also intentionally less precise than it’s capable of” so that the driver stays engaged. Mercedes’ new E-Class cars can also communicate with each other in order to build an enormous database of road and driving information.

“Self-driving Volvos are already on Swedish roads, and by 2017, real-world customers will be using 100 self-driving Volvos on public roads—the world’s first large-scale autonomous drive project,” the car manufacturer says. The first participants are the Hain family in Gothenburg, Sweden, who will share their experiences driving an autonomous XC90 on a pre-selected route.

The goal: totally driverless cars by 2021.

If you see a BMW 7 series zipping along the highway without a driver, don’t panic.  BMW has teamed up with computing giant Intel and Mobileye, a camera and sensor maker, to test 40 autonomous vehicles on public roads in 2017. In a demonstration of BMW’s self-driving car, passengers could use gesture control to get information about their destination or even watch a movie on Amazon.

The goal, BMW says, is to manufacture a fully functional self-driving car for use by ridesharing programs by 2021. 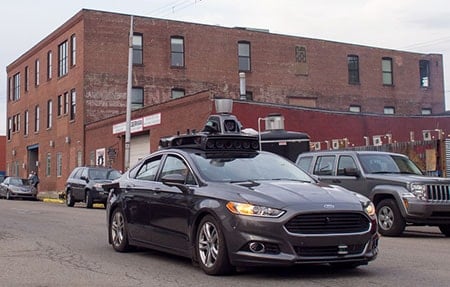 Uber disrupted the taxi business by allowing anyone to become a cab driver. Now it’s trying to cut human drivers out entirely. But Uber has hit a few speed bumps along the way. In early 2017, Waymo sued Uber over the alleged theft of its autonomous-car technology. Waymo claims a former Google employee downloaded 14,000 files on the company’s proprietary lidar (laser-based sensory) system. Later, that information was acquired by Uber, which hired the Google employee to run its self-driving car program.

Ford has been tinkering with a self-driving version of its popular Ford Fusion sedan. They are aiming for a sleek profile by building cameras and sensors into the front pillars and the roof rack. The car maker plans to test 90 of these Fusions on public roads in 2017.

And by 2021, Ford says, it intends to launch a truly autonomous car with no steering wheel at all.

Nissan is one of the rare pessimists in predicting the future of driverless cars. The company’s head of research and development “believes the truly driverless car—something many carmakers and tech giants have promised to deliver within five years or fewer—is an unreachable short-term goal,” Wired reports. It’s just too complicated for computers to process the chaotic conditions on real-world roads.

But Nissan has proposed a solution: real humans in central call centers who can make decisions when an autonomous car falters.

While you’re still waiting for self-driving car makers to develop their final autonomous car models, why not lower your car insurance bill? Start by shopping around on Compare.com. It takes just minutes to get multiple, free quotes.